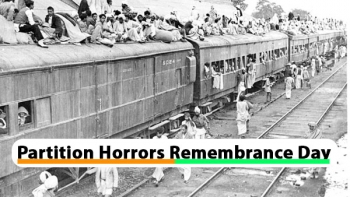 MAJORITARIAN NATIONALISM: It Kills and Divides

What Wordsworth said about poetry is most appropriate to describe the effusion of celebratory nationalism of the last couple of weeks that has swept the entire country and the Indian diaspora off their feet. It has been a truly unique demonstration of “the spontaneous overflow of powerful feelings”, the most overwhelming of which has been national pride. And why not?

Beginning with the pint-sized Mirabai Chanu who elevated the spirits of an entire nation with an impeccable clean and jerk lift of 115 kgs, the herculean medal-winning efforts of wrestlers Ravi Dahiya and Bajrang Punia, the finesse and power of P V Sindhu to win bronze, the skill and indomitable courage of bronze medallist boxer Lovlina Borgohain, the never-say-die ebullience and mesmeric speed of our hockey champs, and then, the ultimate achievement ever --  dare I say in any field -- that perfect javelin throw of Neeraj Chopra which fetched India its first ever Athletics gold medal.

In his dignified, understated but confident manner, Neeraj told all Indians that we have the capability to compete with the best and win! In the past, sportspersons, Nobel prize winners, political and social luminaries have, no doubt, swelled our hearts with pride but nothing can compare with the universal applause and unalloyed joy in the wake of Neeraj’s pyrotechnics. Neeraj has, through his phenomenal achievement, instilled a self-belief and confidence that will motivate future generations. He is now the lodestar that inspires every young Indian.

The sheer unmitigated and universal admiration for our wonderful sportspersons stands out as the finest demonstration of national solidarity “unmisted” by politics or religion. But sadly, the joy and the communal togetherness have been fleeting as the ugly realities of life in this country hit us. For me, the euphoria of the Olympics triumph evaporated when the Prime Minister declared 14th August as Partition Horrors Remembrance Day. He was back to playing the sport that he is most skilful at – keeping the communal pot boiling.

I was reminded of Gurudev Rabindranath Tagore’s scathing indictment of Western nationalism, the desi version of which has been injected into our national bloodstream: “The whole people is being taught from boyhood to foster hatreds and ambitions by all kinds of means – by the manufacture of half-truths and untruths in history; by persistent misrepresentation of other races and the culture of unfavourable sentiments towards them; by setting up memorials of events, very often false, which for the sake of humanity should be speedily forgotten, thus continually brewing evil menace towards neighbours….”

No one will argue with the proposition that a great leader is one who is in the forefront in times of crisis, but retreats into the background when there is a triumphant outcome, letting others corner the laurels. Naveen Patnaik, the Chief Minister of Odisha, whose government nurtured our amazing hockey team, did not tom-tom his State’s crucial contribution. In harsh contrast, the Vishwaguru, who went missing during the height of the second pandemic wave, stole the thunder from the sportspersons by having them as his honoured guests and captive audience, first at the Independence Day function and then over breakfast at his residence. He was sonorous and prolix in his cliched advice and encouragement, urging them to aim even higher. One recalls Clive James’s observation that “the tyrant’s power to bore is a cherished component of the repressive apparatus.”

In the wake of the Olympics triumph, nationalism has predictably become the leitmotif of the political class. Taking a cue from Donald Trump’s “America First” doctrine, the theme of this year’s Independence Day celebrations was “Nation First, Always First”. From paintings to floral arrangements, the entire I-Day paraphernalia displayed this in-your-face commemoration of nationalism. Not to be outdone, the present Government’s ideological, but infinitely more savvy clone informed the country that lessons in “Deshbhakti” will be part of the curriculum in all Delhi schools from September. There you have it – the ruling party’s Rashtrabhakti aka nationalism and the AAP’s version of Deshbhakti or patriotism.  Who will tell these charlatans that the spontaneous cavalcades and untutored crowds that greeted our Olympics heroes needed no lessons in patriotism or nationalism? Their ovation was reflexive and an effulgent acknowledgement of what these heroes have done to make us feel better about ourselves and our country.

The AAP party has squandered Rs 45 crores of taxpayers’ money on a senseless plan to implant 500 flags of hundred metres height at various locations in the Capital, with the intention of instilling in the common man a sense of national pride, although these crafty Deshbhakti pedlars know in their bones that this is empty symbolism that makes nothing happen.

In the context of blind veneration of national symbols and the belligerent hyper-nationalism of the last seven years, the recent judgement of the J&K High Court on the national anthem came as a breath of fresh air and rationality. In the case of Dr T Ahmed Bhat Vs State of J&K, an FIR had been registered against Dr Bhat (a Muslim, who else?) on the grounds that he had shown disrespect to the national anthem.

At a time when sedition charges are flying fast and furious, Justice Sanjeev Kumar, in a truly humane and enlightened judgement, quashed the impugned FIR, stating that the failure of the petitioner to participate in the assembly engaged in the singing of the National Anthem did not “amount to either preventing the singing of the National Anthem or causing any disturbance to the assembly engaged in such singing.”

In contrast to our tetchiness where national symbols are involved, it is worth mentioning that in 1989, the US Supreme Court upheld the right of protesters to burn the American flag. The judgement argued that the protesters’ actions were symbolic speech and “did not threaten to disturb the peace. Nor does the State’s interest in preserving the flag as a symbol of nationhood justify his criminal conviction for engaging in political ex

However, the US Congress rushed to pass a law providing a year in prison for anyone hurting the American flag. The issue remains contentious even today. In 2006, the Congress attempted to amend the Constitution to prohibit flag desecration but failed by one vote in the Senate.

We are in the grip of a dangerous form of nationalism that is unashamedly majoritarian. The current dispensation has seamlessly yoked government to country and national interests. Patriotism has been reduced to fealty to the king! What is unnerving is the fact that most institutions of governance have successfully been co-opted in the project to convert a secular polity into a Hindu rashtra where Muslims, in particular, had better watch out. Not a day passes without a gratuitous outrage being committed against some unfortunate Muslim.

A few days back in Kanpur, Afsar Ahmed was mercilessly thrashed by goons who insisted that he chant what has now become a war cry – “Jai Shri Ram” – even as his little daughter clung to him and pleaded for his life. Police watched this happen. It was heart-breaking! In Assam, 15 people were arrested for social media posts expressing their “support” for the Taliban takeover of Afghanistan. The brute fact is that scores of Muslims stay incarcerated under the draconian UAPA law for the simple crime of being Muslim.

In Indore, an emaciated Muslim bangle seller was mercilessly thrashed and his goods looted allegedly for selling his wares in a Hindu neighbourhood and also, hold your breath, for plotting “love jihad”. To extend Hannah Arendt’s metaphor, evil is not just banal but grounded in preposterous irrationality.

Life would be impossible if there is no hope, but tragically we are in a situation where those Indians who believe in a socialist secular democratic Republic of justice, liberty, equality, and fraternity DON’T MATTER!  Their feeble voices cannot be heard over the din of a raucous nationalism.

Forgive me for concluding on a personal note. I have an eight-year-old grandson who is our life. As an American citizen, he is obsessed with the American flag and goes marching around on July 4 with the Stars and Stripes banner. When he grows older, and if I am still around, I will give him Howard Zinn’s precious wisdom: “If patriotism were defined not as blind obedience to government, not as submissive worship to flags and anthems, but rather as love of one’s country, one’s fellow citizens all over the world, as loyalty to the principles of justice and democracy, then patriotism would require us to disobey our government when it violated those principles.” Yes, my dearest Zubin: you must question a world where standing up for the national anthem is more important than standing up for justice!