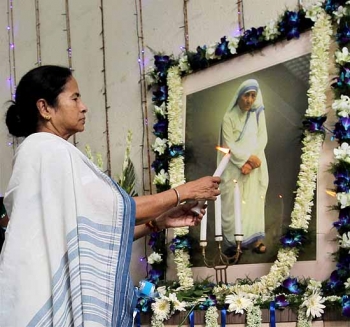 “Sometimes I wonder why I was not born a Christian.” These words are of Mamata Banerjee, the Chief Minister of Bengal, who repeats them when she gets emotional, expressing her love for the poor and the downtrodden.

Basically, she is deeply spiritual and her longing for God is obvious, while she executes some of the plans to implement in favour of the poor, the marginalized and the most neglected of the society. She is the champion of the poor in her political leadership.

A hat-trick Chief Minister who relentlessly fought against all the odds to keep her seat of power to serve Bengal and beyond. Deeply rooted in the soil of Bengal, she thinks globally and acts for the benefit of the poor locally. ‘Think globally and act locally’ is her leadership principle.

Her voice to protect the rights of the poor and distressed resonates well with some of the prophetic voices of the Old Testament.

In the recent month-long campaign for Assembly election, she was not afraid to fight those giants who created chaos, anarchy and confused the minds of the electorate with false propaganda and promises to bring ‘Moha Poriborton’ (Great Change).  Didi stood firmly to fight all odds to preserve the cultural and religious heritage of Bengal and work for unity of all religions.

Bengal is the land of religious and cultural harmony. Bengal has given maximum Nobel Laureates. Bengal obviously attracts all. Those who step into Bengal must become ‘Bengali’, speak the language, get integrated into the culture of Bengal, Bengal’s ‘Doi, Mishti – Rosogolla’ and Bengali food habits. It’s the land of diversity, hospitality and inclusive cultures.

Basically, she is deeply spiritual and religious minded. She is a staunch follower of the teachings of Sri Ramakrishna, Swami Vivekananda, Shri Shri Ma Sarada. Being very inclusive in her thinking and approach, having a pluralist mind-set, her orientation in religious and spiritual belief is deeply Christian. She can be called ‘Anonymous Christian’ like Brahmabandhav Upadhyay, Kesav Ch Sen, Rabindranath Tagore, sister Nivedita and many other leaders of Bengal Renaissance.  No wonder, Mamata quotes Mother Teresa often, her dedicated services to the most deprived and the poorest of the poor. She takes their services of ‘Servant leadership’ as model to execute many of her plans.

The leadership position she holds today as Chief Minister is not for her sake but to save Bengal from marginalization of the downtrodden and forms of oppressions. She has proved herself to be a true political leader, who is also apolitical with deeper spiritual longing and in her selfless service to humanity. As Chief Minister, she does not claim her salary from the Govt. but sustains herself through the publication of her books, music CDs and sale of creative art. The royalty she gets from the publishers and companies is sufficient for her to move forward. Even at the hat-trick chief ministerial post, she has remained simple in her lifestyle and very economical in her expenses.

In the recent election campaign, Bengal saw the dance between the forces of evil and the good. The exposition of wealth, power and pride by the powerful (BJP) failed to buy seats to rule Bengal.  Mamata remained calm and serene in the midst of those tortures and insults. She was very strong to rebuke those forces that tried to overpower by false allegations and promises to capture Bengal. Very courageously and silently, she moved forward with the strength of God. The results have shown her victory over those goons who wanted to dethrone her from her power base.

Her model of service is Mother Teresa, who dedicated her life for the cause of the poor and the poorest of the poor. Even the way she wears her sari with her Trinamool symbol of two flowers in the border shows her commitment to the poor. She lives the Christian values that emerge out of the ‘Beatitudes’, the Sermon on the Mount. When the Vatican invited her to witness the canonization of St. Teresa of Calcutta (Mother Teresa), she was delighted to be a part of this global celebration. She reveres Mother Teresa from her heart. For Kolkata, Mother is the saint of the gutters and the poorest of the poor. Mother is her inspiration and she found in her, “Service of humanity is service to God.”

Here are a few sayings of Mother Teresa that constantly inspire her towards building humanity in Bengal:
“We ourselves feel that what we are doing is just a drop in the ocean. But the ocean would be less because of that missing drop.”
“If we have no peace, it is because we have forgotten that we belong to each other.”
“The biggest disease today is not leprosy or tuberculosis, but rather the feeling of being unwanted.”

Soon after taking the oath in Raj Bhawan, she rushed to ‘Nobbanno’, her office. Her first priority was to address the issue of Covid-19 in Bengal. She has already taken major decisions to implement by providing extra beds in the hospitals, to avail oxygen and to increase ICUs in the hospital. She has imposed lockdown on train and bus services to curb the spread of virus. She is practical and her responses are instant due to her concern for the people.
She is the only woman Chief Minister in India and her style of governance is counted among the world leaders. Mamata’s rise to power was gradual. She had a cause to live. Being branded by media as a “street fighter” to the position of Chief Minister is beyond our comprehension to grasp her inner strength. During the recent election campaign, we watched her restlessness, her anxiety, her spirit to drive away the dark forces engulfing the heart of Bengal. She felt that in no way Bengal should surrender to the evil forces coming to capture power.

She stood alone, even while confined to the wheelchair. We saw in Nandigram, while the news of disturbances reached her, that a section of voters were not allowed to cast their vote and the booth agent was in shock when his life was threatened. He left the place for fear of being killed.  She stood by those helpless voters. Nothing could deter her, stop her, even at the cost of her own life. Bengal had to be saved from the tactics of the goons.
From the most ordinary life, daily commuting by bus or local trains during her college days, she has come to the top position to govern Bengal. She will remain a model for all girls and an inspiration for the empowerment of women.

Mamata Di, the Servant Leader, has a lot to give to Bengal and our country at large. The coming days and months will certainly show us her many innovative programs for the cause of the people and those who are struggling today due to Covid-19 and other inconveniences. May Bengal rise above the petty thinking and materialistic life style! May Bengal learn to sacrifice and grow in the spirit of collaboration, understanding and love for one another!