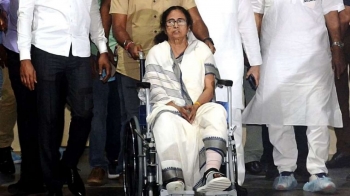 Mamata Has Edge, But Vote-splitting a Problem

West Bengal politics has reached a flashpoint, with Chief Minister Mamata Banerjee injured and her most confidant lieutenant-turned-rival Suvendu Adhikari pitted against her. Both are contesting against each other under different banners for the first time in Nandigram. For over a year, the BJP has been trying hard to make inroads in the state, wooing voters and causing defection from TMC leaders onto their side. But the voters’ mood seems to be upbeat and they are all set to teach ‘traitors’ a lesson.

Mamata has taken ‘head-on’ all the political tactics of the opponents, be it the religious sentiments or development issue or personal attack. Following the Newtons third law of motion, for every action, she had an equal (or double) the opposite reaction. When BJP came up with the slogan of Jai Shree Ram, she raised her voice to say Jai Sita Ram. When they triggered the sentiments in the name of Rama, she came up in the form of Durga. When the Muslim card was played, she testified that she was born in a Hindu family and recited the Chandipath in public meetings. On the petrol, diesel price rise front, Didi took onto the streets on a two-wheeler, sending the message aloud on the mismanagement of Union Government. When her nephew’s family was raided by the Income Tax Department, the BJP youth wing leader was arrested on charges of keeping drugs.

Trinamool Congress's landslide victory in the 2011 Assembly polls rode on the successes of the anti-land acquisition movements in Nandigram and Singur with tacit Maoist backing. Didi had realised that Left Front's only claim to success, land reforms in rural Bengal, had out-lived its shelf life and that the Left's biggest weapon "land" could be used to electorally marginalise them.

It was Mamata's Maa-Maati-Maanush (mother-motherland-people) that worked like magic to rally the masses against the 34-year rule of the once invincible Left Front. But there was another M-word in the slogan that remained silent and yet a potent force, Mao, which along with maati brought about the rout of the Left Front in the state.

In January 2007, Mamata’s Nandigram movement gained momentum and led to the killing of several farmers in police firing. The brutal killings helped Mamata in mobilising the intellectual class of well-known writers, artists, poets and activists, including Mahasweta Devi, Aparna Sen and Medha Patkar, against the forceful land acquisition. The Buddhadeb Bhattacharjee government was forced to withdraw its plan to set up the chemical hub in Nandigram. The Nandigram victory proved to be the turning point in West Bengal's contemporary political history. It was a traditional red bastion till the electorates turned against the CPM.

Similarly, in 2008 at Singur, Mamata again played the role of a saviour of the farmers as they protested against Tata Motor's "forceful" land acquisition for the Nano project. She staged an indefinite hunger strike to force Ratan Tata to withdraw his dream Nano project in October 2008, and the projected was later shifted to Gujarat.

It may be tempting, yet simplistic, to view the latest Congress tiff over the electoral tie-up in West Bengal with Furfura cleric Abbas Siddiqui-led Indian Secular Front (ISF) through the prism of the on-going dissension within the grand old party. Congress hopes its pact with ISF would safeguard its traditional minority base in the Malda-Mushidabad belt. While Congress along with CPM may have split Siddiqui away from Owaisi, who was also working on an alliance with ISF, many of its leaders are worried about the cleric-turned politician’s controversial statements. As a result, the Congress situation in the upcoming elections is rather ironical.

The CPM, which has drawn Congress into this pact along with ISF, is attacking the Congress in Kerala, so is BJP, over its alliance with the Muslim League. Hence, many worry if the understanding in West Bengal with the CPM, which lost 20% vote share in 2019 LS polls, and the ISF will only split the minority vote to BJP’s benefit. Till 1972, the Congress was the principal beneficiary of Muslim votes, subsequently it was the Left Front and then Mamata.

Apart from the erstwhile Jammu and Kashmir, there are three states where Muslims comprise over a quarter of the population: Assam (34.2%), Kerala (26.6%) and West Bengal (27%). In Kerala, the Muslim League has been a partner of the Congress for long; in Assam, Badruddin Ajmal’s AIDUF has teamed up with the Congress for the Assembly election; and in West Bengal, a new Muslim party is being legitimised by the Congress and the Left.

With their infighting and competition coming to the fore, and ignorance of hard core and grassroot-level RSS leaders is a major concern for the BJP. Unlike the neighbouring states of Bihar, Orissa and Jharkhand, people in West Bengal are more knowledgeable and aware of the development issues. A lot of money, celebrity leaders, manpower in the form of RSS cadets have been roped in by the ruling party at the Centre. Several Union Ministers like Smriti Irani, Dharmendra Pradhan, Narendra Tomar and others are campaigning frequently to tilt the voters. Experts feel that the vigorous campaign may backfire and build the image in gaining sympathy for Didi.

Nandigram as well as Mamata Banerjee’s decision to accept a political challenge, of contesting just one seat, is steeped in political symbolism. The high-profile campaign of Congress or Left front will harm the TMC in splitting their common votes. With almost 27% Muslim votes, the entry of ISF or AIMIM will reduce the vote share of TMC. Political experts suggest that a minimum workable seat-sharing strategy should have been in place by all like-minded parties to keep the BJP at bay. At least on 100 seats, where BJP is strong, the TMC-Congress-Left-ISF should have put up only one candidate and avoided the split of votes. Abbas Siddiqui’s alliance with the Congress and the Left could eat into TMC’s Muslim support base and make it a triangular contest. At the same time, there is speculation that the assertion of Muslim identity politics by the ISF could accelerate the process of Hindu consolidation behind the BJP.