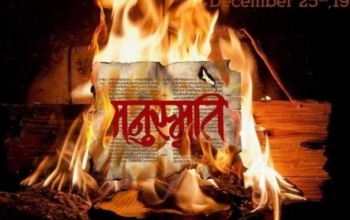 ‘Kaun Banega Crorepati’ (KBC) is probably one of the most successful mega programs on TV channels, with bumper prizes in toe. In its recent episode (Karmayog, November 2020) the host of the show Amitabh Bachan, following the script, asked a question as to which book was burned by Dr. Ambedkar. The correct answer was Manusmriti. The show was also attended by Bezwada Wilson, the foremost anti-caste-anti scavenging activist as the guest.

The reaction to this was very intense from a section of audience. While few appreciated the question for enlightening them about the ghastly nature of caste system enunciated in this book, large sections were very angry. They took it as an insult to Hindu religion; it hurt their sentiments and saw it as an attempt to divide the Hindu society. It was best reflected in the tweet, “This is out of desperation to show BR Ambedkar as anti-Hindu which he was not. They want to divide Hindu community on the basis of caste…”

As a reaction, FIR has been filed against the program host and other personnel behind the show for hurting Hindu sentiments. The dominant discourse, revolving around Hindu nationalism wants to present Ambedkar as having ideas similar to that of theirs’.

There is a complex presentation of Ambedkar by them to on one hand glorify him and in the other to totally undermine his ideology and struggles for equality of dalits. The celebrations of Ambedkar anniversaries are done with great gusto by RSS and company. In one such program Prime Minster Modi stated in 2016, that he is a great Ambedkar Bhakt and compared Ambedkar to Martin Luther King (Jr.). Same Narendra Modi had written a book (since withdrawn) Karmyog, which stated that manual scavenging work done by Valmkis, is a spiritual experience. Incidentally Bezwada Wilson who was guest at the KBC show has been working for decades against the dehumanizing practice of manual scavenging.

Interestingly similar section of people who came out for ‘hurt sentiments’ against the real event of burning of Manu Smriti, had vociferously defended the freedom of ex

Ambedkar, a tall intellectual and the one who led anti-caste, anti-untouchability movement with full gusto did not mince words while criticizing Hinduism. His understanding of Hinduism regarded it as the one which is Brahmanical theology. As such he also regarded Kabir as his second Guru. What we understand from his life and writings is that while he upheld that values of love and amity of Bhakti tradition, he realized the dominant trend from within the multiple streams of Hinduism is Brahmanism so he stated ‘Hinduism is Brahmanical theology’.

In practice he did see the concentrated ex

Today many a people are asking as to who reads and follows Manu Smriti?  There are two factors involved in it. While the Sanskrit text may not be being read by many, still its impact, its values, are part of large sections of Hindus. Akshay Mukul in his book on Gita Press does tell us the impact of Gita Press Gorakhpur in shaping the understanding of large Hindu population. If one visits the multiple books stalls of Gita press at Railway stations and at other places; one can see the low priced books which enunciate these values at a very popular level. I was shocked to see one such book on duties of Hindu women. It was a total elaboration of Manu smriti in a very simple and popular language. What shocked me more was that the print run of this book; priced around five rupees; was running into lakhs.

While there is a claim that Ambedkar was not Anti Hindu, Ambedkar’s own words are very revealing, “Hinduism is …nothing but a mass of superficial, social, political and sanitary rules and regulations, organized around caste…” and famously he had said I was born a Hindu but will not die as Hindu. Similar were his ideas about Hindu Rashtra, the goal of present ruling party, BJP. He points in his book on Partition, ““if Hindu Raj does become a fact, it will, no doubt, be the greatest calamity for this country. No matter what Hindus say, Hinduism is a menace to liberty, equality and fraternity. On that account it is incompatible with democracy. Hindu Raj must be prevented at any cost.”

Despite such formulations there is a strong move by the political maneuvers of Narendra Modi camp to glorify him on one side and to ensure that his ideology and actions are combated at social level. There are regular voices from this ideological camp to replace existing Indian Constitution. On ground level they have adopted multi pronged strategy to make inroads into dalit communities. While Ambedkar calls for ‘Annihilation of caste’, RSS has floated ‘Samajik Samrasta Manch’ (Social harmony Forum), which propagates that caste system is the strength of Hindu society and that all castes are equal. There is a great attempt of ‘social engineering’ to co-opt dalits into the fold of Hindutva ideology. Dalits are made to work as foot soldiers of Hindu nationalist politics through clever maneuvers. And to cap it all some dalits leaders are tempted with power to come to this fold. Recently it was expressed best by Chirag Paswan, when he said that he is Modi’s Hanuman’.

On the lines of Ambedkar’s ideological and social battles, a section of dalit leaders and social workers- activists have worked for social equality and dignity of dallits. The major problem is such leaders are few and far between and there is a fragmentation in their efforts, overcoming which will ensure the social justice and culmination of the dream of Babasaheb, which lead him to burning this book.