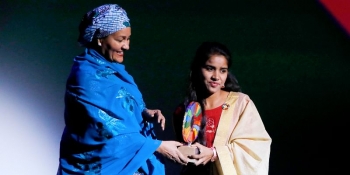 The 11 years old girl overheard her parents discussing about giving her in marriage along with her 13 years old elder sister Babli.

“No, I do not want to get married now. I want to study,” protested the sixth grade Payal Jangid. “If you forcefully marry me, I will run away from the village.”

The frightened parents were forced to give up the marriage proposal.

Child marriage was prevalent in her Hinsla village, about 100 km away Jaipur in Rajasthan.  Deeming that the girls belong to other families, many poor, illiterate parents did not want to spend money in their education, but get rid of the minor daughters by marriage.

Nobel Laureate Kailash Satyarthi and his wife Sumedha had visited Hinsla in 2012 and spoke to the community about a child’s right to education, health care and protection from exploitation. Inspired by their Bachpan Bachao Andolan, Payal too joined them.

Gradually Payal was elected the sarpanch (leader) of her village’s Bal Panchayat (Children’s Parliament). She campaigned against child marriage and canvassed the boys and girls to protest against it. She also combated social evils like domestic abuse, child labour and purdah. Her protests clashed with the iron-fist of long standing tradition and village elders.

For abolishing child marriages in and around her villages, Payal was selected for the U.N. Change Maker Award by the Bill and Melinda Gate Foundation at the Goalkeepers Global Goals Awards held in New York on Sept 26, 2019. The Change Makers Award honours young activists across the world. The award was presented to the 17 years old Payal by Amina J. Mohammed, the Deputy Secretary-General of the UN. Payal became the first Indian to be honoured with this Award.

Receiving the award, Payal spoke, “We have lots of problems in our villages, especially girls are not allowed to go out and study and they are married off early. Even I was forced to get married. I want every child in the world without education to be helped and given a chance.”

Appreciating her daughter’s campaign, her proud father Pappuram Jangid remarked, “Almost all kids are going to school now. There have not been any marriages in the village for the last 8-10 years.”

Payal also had been chosen as a member of the jury for the World’s Children’s Prize in 2013.     She also received in 2017 Reebok’s Young Achiever Award.

Besides campaigning against child marriage, the young Payal continues her graduation in Janki Devi College.  She says, “Many resign themselves to the way things are, far from easily. Everyone must challenge injustice, with strength and co-operation, and not run away or hide from problems, even toughest minds can be changed.”

Peris Tobiko, Kenya’s first Maasai woman elected to the Parliament, says “My elder sisters were pulled out of school and married off, but I was lucky that the teachers intervened in my case. I was performing well, so teachers wanted to keep me in the school.”