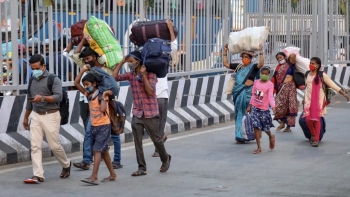 Inter-state and intra-state migration in India is a common phenomenon. Most marginalised people from the less developed states like Bihar, Uttar Pradesh, Madhya Pradesh, Jharkhand and Assam are some of the topmost migrant-sending states. Unemployment, under-employment, extremely low wages, non-payment of wages, landlessness, minimum land holding, poor returns from agriculture, caste oppression, feudal exploitation, lack of educational facilities, lack of industries, and above all lack of alternative employment and income are some of the factors which force the poorest of the poor and the most marginalised to migrate to eke out a living. Most from these categories migrate so that the family members left behind can survive. If they earn little more, they are able to educate their children. Some of the studies of recent past also point to ‘pull factor’ from urban centres. This is all the more the case with regard to youth who take to migration for cash in hand, better clothing and mobile in addition to the reasons stated above.

Madhesh Manjhi hailed from Masaurhi which is 30 km from Patna, Bihar’s capital. Finding no gainful and regular employment as a wage earner, he left with some of the villagers in the first week of November, 2022 to Katpadi in Tamil Nādu to work as a labourer. But on 7th November, his family got the information that his body was found by railway police in Bapatla, Guntur District, Andhra Pradesh. Shocked by this news, the family approached an NGO working in Patna district to see what has happened and what can be done. The NGO working on distress migrant issue in Bihar got in touch with NGOs in Andhra Pradesh, Telangana, Tamil Nādu and Karnataka to ascertain the truth. Also, to find out how the body can be brought home at Masaurhi.

With the efforts of many individuals and civil society, the relatives of Madhesh Manjhi were identified and efforts were made to get them travel to Bapatla where the body was kept in the government hospital mortuary. Irrespective of repeated attempts, the civil society members failed miserably. The following reasons were identified for this depressing scenario: 1) The relatives did not have the money to travel; 2) not educated; 3) did not know the place; 4) did not know the language; 5) not sure if they would get the compensation amount from the railways; 6) not sure if anyone will help them, etc. But the underlying fact is that the most marginalised and vulnerable population of this country are resigned to their fate, knowing well nothing would happen in their favour. Ultimately, the police disposed of the body.

Madhesh Manjhi’s death as a distressed migrant labourer is not an isolated case. Every day, cases of this type are reported by those agencies who are working for safe migration. Sonot Tudu of Dumka district of Jharkhand was going to work in south India as a migrant labourer. In October 2022, he left home and within a couple of days, the family got a call from the Railway Police Force at Erode in Tamil Nādu that his body was found on the railway track and is kept in the hospital. It took 10 days to mobilise the family members to go to Erode and claim the body of Sonot. Since the body was decomposed, it could not be brought back home but cremated at Erode and ash was carried by his son who was working in Karnataka and last rites were conducted at home.

Sonot left behind a widow and 5 children with no economic means to feed them, educate them and bring them up. The widows and the children of Manjhi and Tudu are left to fend for themselves. But Tudu was fortunate enough to have his last rites conducted at home for the repose of his soul. The family too now does not feel guilty since his last rites were conducted at home as per their cultural, social and religious norms. Manjhi was not fortunate enough to have the last rites. His family in utter poverty and helplessness continues to suffer from the fact of not being able to claim his body and conduct the last rites.

In a study undertaken by a NGO in 2020, the following were some of the critical issues that were highlighted by the returnee migrants: 1) They lost livelihood, wages, security, etc., and some of them even lost their lives; 2) A vast number of migrant labour force comes from Dalit, Tribal, MBC and minority communities who are mostly landless, less educated, poor, rural-based and hence are not able to handle the complications of the urban life and had to walk back home; 3) In many formal sectors, one can work from home but this is not possible in unorganized sector and thus the migrant labourers are forced to return home; 4) Migrant labourers are mostly unskilled and did not earn; hence they faced greater hardships without food, water and transport; 5) Migrant labourers felt betrayed, ill-treated, starved, dislocated, destroyed and ended up in depression; 6) Children are the worst affected in the time of crisis. During COVID-19, it was witnessed that child labourers were greatly exposed to abuse and violence. Many reports suggest that economically distressed families, marry off adolescent girls to alleviate their situation; 7) The returnee migrants were clueless about their livelihood back at home and about their future.

The blatant, biased treatment of the internal and external migrants by the government has come under criticism. Those who got cheap and best education from the best of the educational institutions of the country decide to go abroad for green pastures instead of paying back to the country which built their career. When COVID-19 affected the world, these non-resident Indians were flown back home by special flights, while the migrants were forced to walk hundreds of miles. Since the migrants are considered to be second category, they are subjected to disgrace, disrespect and deplorable condition.

What is much more depressing is that the rulers have not learnt lessons from this dehumanising condition and have not put in place a National Policy of Internal Migration. There should be a policy in place which addresses the factors behind distress migration, pre-departure decision and pre-departure training for safe migration, connectivity between place of origin and destination, state level offices especially from the state of origin so that the migrants’ issues are addressed. The government for the sake of publicity and popularity keeps talking about “One Nation and One Ration Card”. If this is implemented, then the migrants can benefit. It is to be reiterated that if the country does not address the issue of the distress migrants, it is digging its own grave.