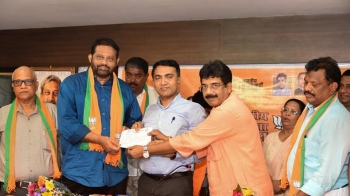 Hot news: In February 2022, during the state election in Goa, the Congress candidates took an oath in Temple, Church and Mosque that they would never change party if they won the election. Eleven candidates won and became MLAs, but eight of them recently joined the BJP. When the media persons reminded these MLAs about the oath they had taken in February, one of them, without any shame, responded that God has asked them to go ahead and join BJP. These selfish MLAs have “taken the common people who voted for them, and God, for a ride”? This “shameless act”’ has been committed when the Congress-initiated 150-day Bharat Jodo Yatra is going on vigorously in Tamil Nadu, Kerala and moving towards the neighboring state of Karnataka. Now, the unanswered question is: “What attracted these Congress MLAs to BJP?” Without any hesitation and based on what happened in other states, we can conclude that money has apparently played a role in this ‘business transaction’, rather ‘MLA trade’.

Horse-trading: “Beti Bachao-Beti Padhao” has been one of the pet slogans of BJP on campaign platforms, election campaigns and political speeches. In similar lines, today the opposition parties are raising one slogan: “MLA Bachao”. The power-crazy ruling BJP is targeting non-BJP states to capture power by hook or crook. One of the ways seems to buy MLAs of opposition parties, destabilize the local government and then capture power. The country has witnessed this in the northeastern states, Madhya Pradesh, Maharashtra, Goa and Karnataka. Hence, opposition parties, big or small, are forced to safeguard their own MLAs. However, the opposition party MLAs are becoming easy victims.

The recent state to join this list is Delhi. According to Delhi Chief Minister Arvind Kejriwal, the BJP has spent around 5400 crores to buy 275 MLAs in various states. He and his Deputy CM Manish Sisodia accused that BJP has been trying to buy AAP MLAs by offering 20 crores each. In order to safeguard his MLAs and also prove majority, Kejriwal moved “Confidence Vote” in Delhi Assembly and proved his majority. The latest accusation of Kejriwal is that the BJP is trying to buy AAP MLAs in Punjab fixing 25 crores as the price for each MLA.

The horse-trading in Maharashtra woke up Nitish Kumar of Bihar. He guessed rightly that his government would be the next target of BJP. Hence, he broke the alliance with BJP and joined hands with RJD. He succeeded in becoming the CM again. He was indeed smart enough to escape from the ‘dangerous trap’ of BJP. Another state that feared horse-trade was Jharkhand. Hemant Soren, the Chief Minister, first took his MLAs to a resort at Khunti. From there he shifted them to Raipur in Chhattisgarh (Congress-ruled state).

Learning lessons from AAP and Nitish Kumar, Soren moved the “Confidence Vote” in the Assembly and proved his majority.

Today, more than social and economic issues, the “buying of MLAs” has become a burning issue in the country. It seems the duly elected MLAs are ‘shifting freely’ from one party to another just for money. They do not stick to any principle or have a long-term vision for the nation. “Politics without principle” is one of the seven crimes which Mahatma Gandhi had mentioned. The politicians just want two things -- power and money. Service to people becomes a ‘forgotten promise’. In the climax scene of the Hindi film Madari, the politician makes a public confession: “Politics is for corruption. We politicians, intimidate people by using laws and constitution. We use the government machineries to make money for ourselves. We stoop to any level for this sake.” This is what we witness in the Indian politics today.

Be it state-level or national-level elections, the EC is seen favouring the ruling party at the Centre and its alliance. It has failed to control the ‘distribution of cash and gift items’ to electorates. It has also failed to stop fake voters. Each fake voter reportedly gets 3 to 4 voter IDs making them eligible to vote in multiple constituencies.

EVMs: Today the Electronic Voting Machine has become the talk of the town, especially during election time. Reports about tampering with EVMs are galore and doubts have been expressed about their reliability. There have been civil society groups voicing against the usage of EVMs. They are propagating the use of ballot papers. Neither the Union government nor the Election Commission seems to bother about the complaints and suggestions of the common people. Favouring the EVMs creates doubts that they can be tampered with and manipulated so that the results are in favour of the ruling party at the Centre.

In the backdrop of distribution of money to voters and manipulation of EVMs, incidences of “horse-trading” continue to occur in all non-BJP-ruling states. Sadly, the Judiciary and the Election Commission have become passive spectators. There is no law, with teeth, to prevent an elected candidate from shifting to another party. If horse-trading is permitted, then, why should there be an election? The common people are not sure whether the elected candidates would remain in the same party till the end of the 5-year tenure. Has election not become a meaningless and expensive ritual? Why should people vote at all, for whom and for what?

Victims: A vast majority of the common people in the rural areas are unaware of the “buying and selling of MLAs”. The people vote and elect an MLA mainly because of a political party he/she belongs to. The people believe that the elected MLAs will give them good governance and take care of the developmental needs of the constituency. When the MLAs become part of horse-trading, they leave their constituencies and the state, reside in posh hotels and resorts. It is the tax-payers’ money that is spent for their luxurious stay. As a consequence, the trust that the people placed in the MLAs and the hope that they will give good governance are thrown to wind. The innocent people get cheated again and again.

Proposal: In such a scenario, “Auction of MLA candidates” could he held in similar lines with the auctioning of Cricket Players for IPL matches. The aspiring candidates could apply to the Election Commission. After a thorough screening of the applications and background check of the candidates, the EC could finalise the list of eligible candidates. All parties will be eligible to buy the candidates. On a prescribed day, the EC will conduct the auction. All eligible candidates will be gathered in a public place. Every political party will bid for a candidate. The highest bidder will buy the candidate for 5 years. The party that buys majority candidates will form the government. An important condition will be that the candidate has to remain with the buyer-party for 5 years.

Does this sound illogical, nonsense and stupid? May be! If so, do we have the courage to question these MLAs and conduct protests against them? Can we initiate concrete steps to build awareness on the negative impacts of horse-trading? Are we not having the responsibility to stop wastage of tax-payers’ money? Should we not introduce strict measures to prevent the trading of MLAs and protect our democracy? Let us find answers!