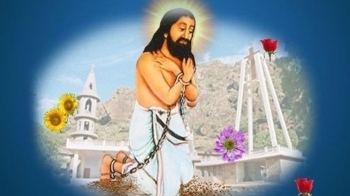 There is not one person in Kanyakumari district of Tamil Nadu who hasn’t heard of martyr Devasahayam, widely referred to as Devasahayam Pillai. Born as Neelakandan to Vasudevan Namputhiri and Devaki Amma, he was trained in archery, varmasastra and weapons of war only to serve as a soldier in the army of Maharaja Marthanda Varma, king of Travancore. He also served as an official in the Neelakandaswamy temple at Padmanabhapuram and as a palace official.

Neelakandan met Eustache de Lannoy, a prisoner of war, and got to know him better when he served as the paymaster to the construction labourers of the Udayagiri Fort. A friendship developed between Neelakandan and the Dutch officer De Lannoy with whom he shared his sorrows and identity crisis. De Lannoy comforted his friend with stories of Jesus and Job. Anguish and despair of Neelakandan’s heart were lifted. Feeling strengthened, uplifted and with full of hope, Neelakandan embraced the new found faith.  His admirers and followers knew the two reasons behind his allegiance.

He was moved by the heartrending story of Christ’s unconditional love and forgiveness. He realized there is no true love among people who discriminate and exploit fellow beings. After 9 months of catechism classes, Fr. Buttari baptised Neelakandan as Devasahayam which is translated as Lazar in English and Lazarus in Latin meaning ‘God has helped’. Soon after, Devasahayam’s wife couldn’t help but notice a transformation in her husband and decided to follow in his footsteps, with all her heart.

The price Devasahayam had to pay for embracing Christianity and remaining firm in his faith was heavy. He endured untold miseries, inhuman torture, survived several kinds of humiliation, prisoned for years, then shot dead in Kaatradimalai, Aralvaimozhi and his body was thrown to the wild. After some days, his body was spotted and buried at Saint Francis Xavier Cathedral, Kottar, Nagercoil.

The news of canonisation of Devasahayam did not come as a surprise to the people of Kanyakumari district because they know of him as a layman who did everything he could to disregard the petty and wicked standards set by mere mortals. For centuries, prevalence of caste and caste-based atrocities are so deep-rooted in our societies that people take pride in belonging to a caste or claiming men of greatness to be their own, not sparing even blessed people. Thus, Devasahayam’s name resurfaced with a ‘Pillai’ in it.

Close to Dr. Lazarus Singarayan’s heart (Dr. Lazarus Singarayan is a retired scientist  of ICAR and Emeritus professor of MS University, Tirunelveli) was this issue of a caste tag attached to a martyr’s name and he was even more troubled by it soon after Devasahayam was declared ‘Blessed’.  As an Emeritus fellow with a long list of academic credentials, Dr. Lazarus was busy serving educational institutions that fall under the Kottar and Kuzhithurai dioceses. Yet, he channelized a major part of his time and energy towards eliminating the ‘Pillai’ tag. It was then he discussed this with former IAS officers M.G Devasahayam and S Devaraj, friends B.S Anbu and P Alphonse and they came together around this shared mission.

Soon after Devasahayam was beatified by Pope Benedict XVI on December 2, 2012, Dr. Lazarus was prompted to try everything possible to undo the damage done to a soon-to-be saint’s name. Research on how the additional name ‘Pillai’ was added to the martyr’s baptized name revealed that people have always sought ways to accommodate caste at any costs and thus couldn’t convince themselves that Devasahayam converted to Christianity to disown caste status.

So, in 2015 Dr. Lazarus wrote to His Excellency Peter Remigius, then Bishop of Kottar diocese, that it’s not only inappropriate to address the martyr as Devasahayam Pillai but unacceptable by all means. Also, he sent facsimiles of the same to Most Reverend Dr. V. Jerome Dhas, Rev. Fr. Dr. V. Mariadhasan and other notable priests and religious leaders. Since Dr. Lazarus did not receive a reply, he wrote to His Holiness Pope Francis on September 23, 2016. Anticipating a reply in vain, Dr. Lazarus wrote to His Eminence Angelo Cardinal Amato in Rome on March 12, 2017.

On June 19, 2017, Dr. Lazarus received a disappointing reply from Marcello Bartolucci, Archbishop Secretary in Vatican, saying, ‘as per the specific indications of His Excellency the Most Reverend Peter Remigius, former Bishop of Kottar, this Congregation is not in a position to make any change or changes to the name of Blessed Devasahayam Pillai’.

However, many Catholic priests of Tamil Nadu, Kanyakumari district in particular, were of the strong conviction that the practice of using a caste title as surname must be abrogated. Hence, with the support from a conscientious civil society, they stood up to fight away false notions surrounding the life of Devasahayam. The evasive reply from Vatican did not deter Dr. Lazarus from going the extra mile to rectify the grave mistake.

In 2018, Dr. Lazarus’ letter to His Eminence Angelo Cardinal Amato carried duplicates of Bishop Leon A Dharmaraj’s invitation, which did not carry the caste name, to celebrate Devasahayam’s 250th year of martyrdom and newspaper clippings of priests who advocated the truth behind the martyr’s name. Dr. Lazarus requested the Papacy to cross-check the catechism and baptism records of Devasahayam available in the papal office.

Appreciating Dr. Lazarus’ rationale behind his struggles, the present Bishop of Kottar diocese Nazarene Soosai pulled out all the stops to do away with the caste name ‘Pillai’. Consistent efforts and persuasion from different quarters moved Pope Francis to drop the fictitious surname and declared the canonisation date of Devasahayam as May 15, 2022. Thankfully, Kanyakumari district is blessed with people to protect and preserve the legacy of the Blessed Devasahayam who advocated dignity and equality of all human beings.

To all those who don’t care about hypothesis, this story is about people living up to their names or mere coincidence. Gordon Allport was right: Our most important anchorage to our self-identity throughout life remains our name. As Devasahayam has joined the family of saints, may we ruminate on his remarkable life and courage, and draw inspiration to fight callous casteist biases.