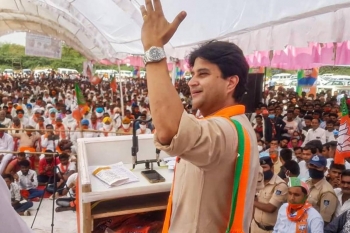 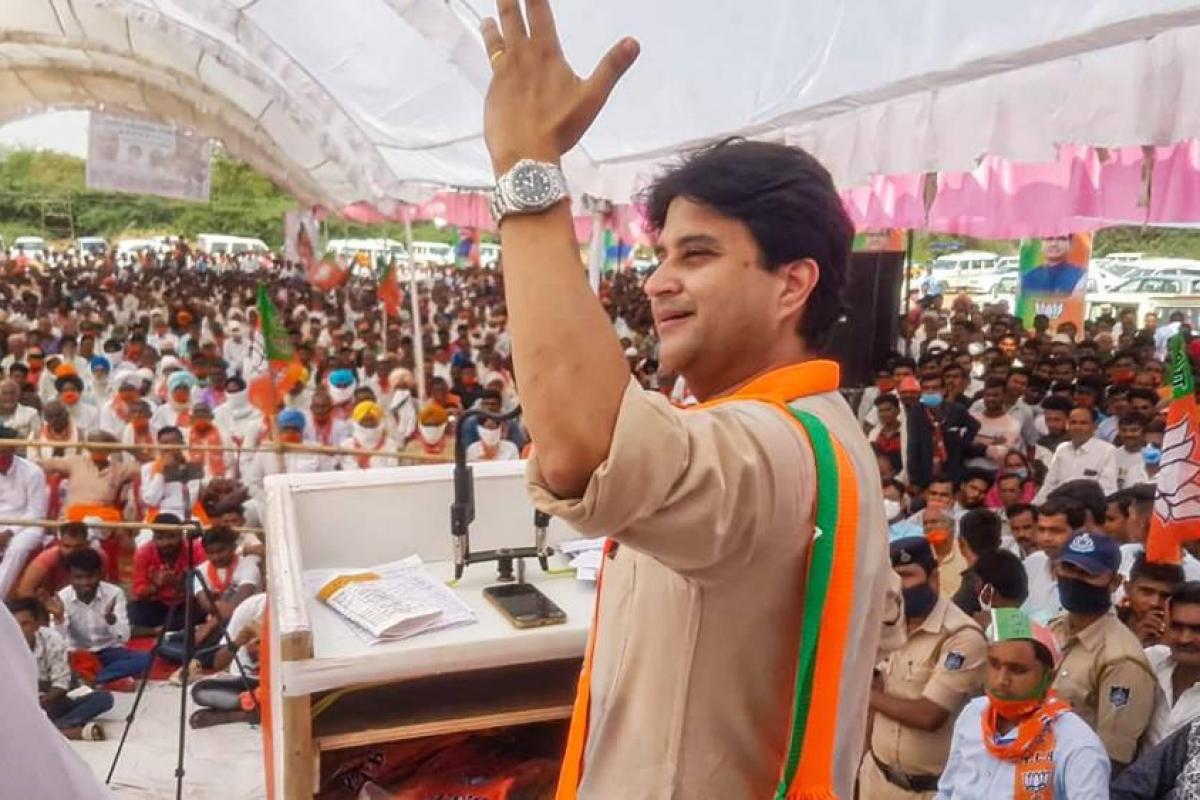 Jyotiraditya at a low in his political career

Jyotiraditya Scindia’s future politics and Shivraj Singh Chouhan’s chair are at stake in Madhya Pradesh Assembly bye-elections. However, the polls are more of a prestige battle between Scindia, who left the Congress and is eyeing a Ministerial Berth at the Centre, and Kamalnath who is again vying to take over as the Congress Chief Minister (CM). Former CM Digvijay Singh is alleged to be the think tank behind Scindia’s exit from Congress, who had asked for a Rajya Sabha (RS) seat and the Pradesh Congress Committee President’s post. These two demands could have been easily accommodated to save the Congress Government in MP and the by-polls averted. In fact, later both Digvijay and Scindia have made it to the RS, although from different parties.

The 22 MLAs, who had left Congress along with Scindia are in a fix contesting the polls this time on a BJP ticket, which they have been opposing tooth and nail during their life time. Simultaneously, the BJP leaders and workers are not comfortable with a new entrant, most of them as ministers, being imposed upon them. The general public is seeing them as traitors who have pulled down the Government for their own vested interests and as a plot of horse trading. At the same time, a vacuum has been created within the Congress party, at some places, with the exit of these Congress leaders, leaving the organizational structure into shambles.

Along with the Bihar assembly elections, around 54 assembly seats of 10 states went to polls on November 3. The by-polls to the 28 Assembly constituencies in Madhya Pradesh is crucial for the ruling BJP to reach the majority mark in the House, while in Uttar Pradesh, the polls will help gauge the mood of the voters ahead of the 2022 state elections at a time when the Yogi Adityanath government has faced widespread criticism on the issue of law and order, and Gujarat will reflect on the popularity graph of Narendra Modi.

Jyotiraditya was only one such Congressman who could enter into Rahul Gandhi’s room anytime without a prior appointment. He was at par with Priyanka Gandhi, in-charge of UP Assembly polls and always had a prominent say in all the Congress committee decisions. In the recent BJP meetings, chaired by the Prime Minster, Jyotiraditya found a back seat in the third row. There is an old phrase, “Old habits die hard” and the Maharaja maintains even now that royal ambience and culture. People close to the erstwhile royal family underline that Harvard and Stanford-educated Jyotiraditya is neither as accessible nor as modest as his father.

The national BJP leadership is not very keen to retain Shivraj Singh Chouhan as the CM, but for his individual popularity and the majority of MLAs loyalty, he has been retained. Within the party, a new chunk of leaders including, Union Agriculture Minister Narendra Singh Tomar, State Home Minister Narotam Mishra, BJP General Secretary Kailash Vijayvargiya, Union Minister of State for Tourism Prahalad Patel are eagerly waiting for an opportunity to take over the realms in their hand in MP.

None of the National level party leaders like Narendra Modi or Rahul Gandhi campaigned for their candidates this time in MP. Amid portraits of Prime Minister Narendra Modi, BJP president JP Nadda and Chief Minister Shivraj Singh Chouhan on the hoardings at the party’s Bhopal office, the absence of a popular face, whose 19 supporters are in the fray for the 28 by-polls after pulling down the Congress government in March, has been debatable.

In the 230-member Assembly, the BJP has 107 seats and the support of four independents, two Bahujan Samaj Party (BSP) lawmakers and one suspended Samajwadi Party MLA. The BJP aims to become independent of others to form the government and for that it needs to win nine out of the 28 seats in order to cross the halfway mark. Congress, meanwhile, has 87 MLAs (after one more left recently), and it would need to win all 28 seats to cross the halfway mark which of course is a tough task. But even if the Congress is able to win 20-21 seats, it could stage a comeback as it would overtake BJP’s tally and put pressure on the independents, the BSP MLAs and the rebel SP MLA to switch sides.

Out of the 28 seats going to polls, 25 fell vacant after Jyotiraditya’s rebellion against the Congress and subsequent resignation of 22 MLAs, which led to the collapse of the Kamalmath government in March 2020. In July, three more Congress MLAs deserted the party to join the BJP. Of these, 16 are in the Gwalior-Chambal region, where Union Minister Narendra Singh Tomar, Jyotiraditya and Digvijaya Singh are fighting for their supremacy. This region has one of the highest intensity of caste atrocities and violence. This was also the epicentre of the Bharat Bandh against the dilution of the SC and ST (Prevention of Atrocities) Act in 2018 and the attack on Dalit protesters by privileged castes. The violence had a direct bearing on the Assembly elections later that year, with Dalits voting decisively against the BJP and privileged castes expressing their dissatisfaction with what they called was BJP's attempt to appease Dalits. This region has an influence of BSP, which is contesting all the seats in the upcoming by-polls.

Jivajirao Scindia was a patron of the Hindu Mahasabha in Gwalior. Vijayaraje and Jivajirao had five children. The eldest daughter, Padmavati Raje, married Kirit Deb Burman of the Tripura royal family. The second daughter, Usha Raje, married Shamsher Jang Bahadur Rana from the royal family of Nepal. Vasundhara Raje and Yashodhara Raje are both BJP leaders, while Madhavrao was a Congress leader.

Jawaharlal Nehru, then the prime minister, convinced Vijayaraje to join the party and contest from Guna. She did and in the 1957 Lok Sabha elections, defeated the Hindu Mahasabha candidate from the constituency. In 1967, when she went to discuss elections and ticket distribution, then CM DP Mishra forced her to wait for 15-20 minutes. This didn’t go down well and she took it as an insult and left the Congress with 36 legislators. And, the first non-Congress government in MP was formed with Govind Narayan Singh as the CM.

The Scindias’ proximity to the British had earned them many rewards. In the Imperial Durbar in Delhi in 1877, Jayajirao Scindia, the maharaja of Gwalior from 1843 to 1886, had received the rank of a general and a 21-gun salute. In 2010, the BJP-ruled Gwalior municipal corporation wrote on its official website that the Scindia family had conspired against Rani Lakshmi Bai of Jhansi and provided her a weak horse to fight with Britishers.

Communist Party of India (Marxist) leader Badal Saroj, who hails from Gwalior, says, “The gun used in Gandhi’s assassination was brought from Gwalior. It is shocking that how Nathuram Godse acquired the gun and where it came from was never thoroughly investigated. Although no direct link between Jivajirao and Godse was found, it is true that people close to the Palace provided the gun. All the accused, including gun-seller Jagdish Goyal and the man who purchased it, Dr D S Purchure, were close to the royal family.’’

When Jyotiraditya got married, his grandmother was not even invited. The family bitterness later transformed into legal battles, which ran into crores of rupees and continued even after the deaths of both Vijayaraje and Madhavrao Scindia. During the last Assembly elections, Mahanaryaman, son of Jyotiraditya lead the Congress Campaign in Guna, Gwalior and Shivpuri districts. But, when Jyotiraditya parted ways with the Congress, he tweeted: “I am proud of my father for taking a stand for himself. It takes courage to resign from a legacy.”

Only time will reveal, how comfortable Jyotiraditya is with BJP, or vice versa!