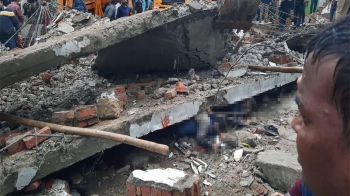 The roof of a shelter at a Ghaziabad (Muradnagar) crematorium that collapsed on 3 January this year killing at least 24 people in the age group of 22 to 60 years and injuring over 15 others is a classic example of how often buildings are not only haphazardly constructed but regulatory norms are flouted with impunity.

It is so appalling that most of the victims had come to the crematorium for the last rites of a relative when the roof came down on unsuspecting people. That all the victims were males means rebuilding the lives of kith and kin will not be easy for the families who lost their breadwinners. The State government has announced Rs 10 lakh each as compensation for victim families, besides constituting a special investigation team of the Uttar Pradesh Police’s economic offences wing. An initial inquiry by a committee of engineers had found the use of substandard material coupled with faulty design ultimately led to the structural collapse.

Of the five persons have been arrested so far, three are officials of the local Nagar Palika besides the contractor who was involved in the construction of the crematorium and his accomplice. What is more disconcerting is that the contractor reportedly stated that he allegedly bribed the local officials and also resorted to malpractices.

The Muradnagar crash may just be a tip of the ice berg as collapse of bridges, flyovers and buildings are not uncommon in India. The cause for concern is that rapid urbanisation has often led to several challenges. Then there are greedy officials whose palms when greased seem to look the other way while granting licences and no objection certificates.

Take the case of a higher secondary school in Ahmedabad which collapsed on 26 January 2001 when earthquake devastated Gujarat. 32 hapless students of class 11 met with untimely death as the building of the School crashed. The unfortunate students who were buried in the debris of the building had to be extricated after much efforts. When the matter went to Court, it was found that no building use permission was taken before the School was started. Although plans were sanctioned as per the Municipal bye-laws, construction was not made in accordance with the Plans. It was necessary that a soil test had to be carried out on the land upon which the School building was constructed, but no such test was done. No supervisor was appointed while the construction of the School building was going on, and as such the work proceeded without any supervision. After completion of construction, the required completion Report was not provided to the Municipal Corporation. The school Building was constructed within a period of one year and it also collapsed in less than one year.

Last September, a three-storey building collapsed in Maharashtra's Thane district in which nearly 41 people lost their lives. The building is said to have housed 40 flats. Over 150 residents were sleeping inside when the building crashed in the wee hours of the morning. When the debris was cleared which took almost 50 hours, highly decomposed, mutilated dead bodies recovered included 18 children in the age group of two to 15, including three toddlers.

While shoddy and illegal construction is a major cause, poor maintenance of old buildings compounds the problem as well.  According to studies, while building the foundations, the solidity of the soil and the heaviness of the building and its contents mean a lot. It has been found that another reason for building collapses is that materials used to build the structures are often not strong enough to withhold the load. Some contractors tend to use counterfeit materials like scrap metal instead of steel. Moreover to cut costs, developers may also deploy unskilled workers who are cheaper than trained ones and there can be errors while mixing ratios of the concrete. Buildings may also collapse if the load is beyond the building's strength that can happen when extra storeys are added rather illegally.

We have a National Building Code, 2015, but how many religiously adhere to it. According to National Crime Records Bureau data, a total of 13,473 cases of structural collapse were reported across India between 2010 and 2014. Of all these, 1,614 people were crushed under commercial buildings, while 4,914 died when residential buildings collapsed. Notably, during the same period, flyovers killed a little over 6,200 people.

Will the Muradnagar tragedy serve as a wakeup call?