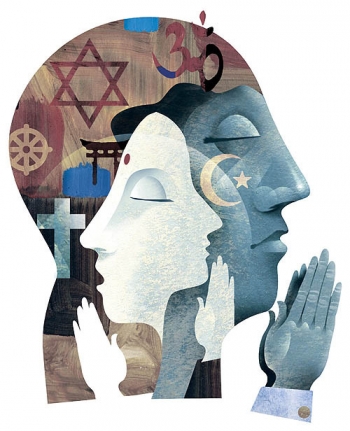 Musings on Freedom of Religion

Against the backdrop of the Universal Declaration of Human Rights (1948), the Constitution of India came into effect in 1950. Obviously, strong echoes of the Universal Declaration of Human Rights reverberate in the Constitution, especially in the formulation of the Fundamental Rights that it guarantees to citizens. These Fundamental Rights are the basic six human rights -- right to equality; right to freedom; right against exploitation; right to freedom of religion; cultural and educational rights; and right to constitutional remedies.

Article 18 of the Universal Declaration of Human Rights states that “Everyone has the right to freedom of thought, conscience and religion; this right includes freedom to change his religion or belief, and freedom, either alone or in community with others and in public or private, to manifest his religion or belief in teaching, practice, worship and observance.” Against the backdrop of this Article on religious freedom, the Constitution guarantees the right to freedom of religion to all citizens of India. Hence, Article 25 of the Constitution states: “Subject to public order, morality and health and to the other provisions of this Part, all persons are equally entitled to freedom of conscience and the right freely to profess, practise and propagate religion.”

During the Constituent Assembly debate on 6 December 1948, objecting to the use of the word ‘propagate’ in the text related to religious freedom, Lokanath Misra, one of the members of the Assembly, argued that the word ‘propagation’ “can only mean paving the way for the complete annihilation of Hindu culture, the Hindu way of life and manners. Islam has declared its hostility to Hindu thought. Christianity has worked out the policy of peaceful penetration by the back-door on the outskirts of our social life… Let not the Constitution put it as a fundamental right and encourage it.” Notwithstanding Misra’s objection, the word ‘propagate’ found its place in the Constitution in the context of religious freedom in India.

Misra’s hypothetical fear has been reimagined into a discourse which seems to hold that the concept of the ‘freedom of religion’ is a great threat to the majority Hindu religion and culture in contemporary India. Though this polarising discourse has been gaining gradual momentum over the decades, this momentum has received a greater impetus after the victory of the Bharatiya Janata Party (BJP) in the 2014 Lok Sabha election and its subsequent victory in the 2019 Lok Sabha election.

In view of countering this threat, the right-wing organisations have been working towards the building up of a consensus among the Hindus for the creation of a Hindu Rashtra based on Hindutva, the Hindu cultural nationalism. These right-wing organisations not only position the Hindu community as victims of historic injustice at the hands of the minority communities but also try to convince the Hindus that their religion and culture are in grave danger under the sway of the minority religions and their culture, especially those of Muslims and Christians. Since the ascend of the BJP to the seat of power in Delhi, a major section of the news media has been sycophantically at the service of this acrimonious right-wing propaganda. Assuming dangerously partisan ideological positions, certain anchors of some primetime television news and debates not only endorse the right-wing anti-minority propaganda but also position it as an ex

To call the bluff of these malicious propagandists, on 31 August 2021, Mohnish Jabalpure, a Nagpur-based activist, sought proof of threats to the Hindu religion in the country through a Right to Information (RTI) query from the Union Ministry of Home Affairs (MHA). In its reply to Jabalpure’s query, V S Rana, MHA’s Central Public Information Officer (CPIO), stated that it is neither aware of any such threat nor has any evidence to corroborate it, and hence the alleged threat is ‘hypothetical.’ The propagandists of right-wing Hindu nationalism keep telling the majority community that they are victims of their minority aggressors, more specifically Muslims, despite the denial by the Home Ministry. This is a brazen method of maligning the Muslim community as well as a clandestine method of infringing upon their freedom of religion for political advantages.

That explains why during a three-day conference called ‘Dharma Sansad,’ a religious parliament, organised at Haridwar in Uttarakhand in December 2021, hundreds of right-wing Hindu activists and Hindu monks vowed publicly to turn India, a secular republic, into a Hindu Rashtra. The conference attended by several prominent Hindu religious leaders was marked by hate speeches and called for violence and even genocide against Muslims in India. The high point of hatred towards Muslims came from Sadhvi Annapurna also known as Pooja Shakun Pandey, a leader of Hindu Mahasabha. She gave an unambiguous call for the genocide of the Muslims saying, “Nothing is possible without weapons. If you want to eliminate their population then kill them. Be ready to kill and be ready to go to jail. Even if 100 of us are ready to kill 20 lakhs of them (Muslims), then we will be victorious, and go to jail… Like [Nathuram] Godse, I am ready to be maligned, but I will pick up arms to defend my Hindutva from every demon who is a threat to my religion.”

Prime Minister Modi who keeps reminding the nation of his political philosophy based on sabka saath, sabka vikas, sabka vishwas, (together with everyone, for everyone’s growth, with everyone’s trust) remained silent on this deadly call for outright adharma, hatred, violence and genocide at the Dharma Sansad. As the silence of the Prime Minister shocked the conscience of secular India, Indian Muslims for Secular Democracy (IMSD) described the silence as “a mockery of Indian democracy, a violation of the Indian Constitution which the PM has sworn to uphold during his swearing-in.”

The polarization of people in the name of religion, especially Muslims and Hindus, is not new in India, not even in post-independent India. However, patronising the polarisers by the state and the mainstream media is characteristic of the Modi era in national politics. No wonder, Pooja Shakun Pandey could muster the audacity to write a letter to the then President Ram Nath Kovind with her blood on 5 June 2022, demanding him to place restrictions on Muslims’ Friday prayers because she believes, “Friday is not a day for prayers.

Instead, it is a day for terrorism. The Friday congregations by Muslims are not for worship but for the genocide of non-Muslims, loot, arson and sexual harassment.” Therefore, on behalf of the Akhil Bharat Hindu Mahasabha, she placed two demands before the President: 1) “On Fridays, the entry of Muslims in small mosques should be restricted to 10 Muslims while 25 Muslims should be allowed in bigger ones. 2) Mass prayers should be immediately banned… Mosques, where there are riots and conspiracies on Fridays, should be demolished with bulldozers.”

Both President Kovind and Prime Minister Modi are aware of the freedom of religion that the Constitution of India guarantees to its citizens. However, they are also conscious of the fact that either overt or covert support for the right-wing Hindu nationalists and their polarising anti-minority, especially, anti-Muslim propaganda brings in rich political dividends. Therefore, instead of reprimanding the culprits, the BJP takes good care of them unless it is going to affect the party adversely as in the case of Nupur Sharma’s hate speech related to Prophet Muhammed on 26 May 2022 on a national television channel.

While the majority Hindu community accuses the minority Muslim community of using force and threats to convert people to Islam, the Christians of offering inducements and bribes, they deify themselves as facilitators of homecoming at all instances of conversion from any religion to Hinduism. These customary accusations against Muslims and Christians are often unfounded and made even on insufficient data. Christians are often accused of using their educational institutions for religious conversion. While dwelling on this accusation, one must keep in mind Article 26 of the Indian Constitution which states: “Subject to public order, morality and health, every religious denomination or any section thereof shall have the right … to manage its own affairs in matters of religion….” While clause (1) of Article 28 states that “No religious instruction shall be provided in any educational institution wholly maintained out of State funds,” clause affirms the right to impart religious instruction in educational institutions maintained by religious groups stating that “Nothing in clause (1) shall apply to an educational institution which is administered by the State but has been established under any endowment or trust which requires that religious instruction shall be imparted in such institution.” So long as Christian educational institutions undertake their propagation of the faith and religious activities (if at all they do) as per the provisions in Article 28, how do and why should they become objectionable to anyone?

Religion, as Milton Yinger an American sociologist says, is “a system of beliefs and practices by means of which a group of people struggles with the ultimate problems of human life.” This genuine struggle in every form should be encouraged and safeguarded so long as it does not infringe upon anyone else’s right to do the same. The judiciary has tried to safeguard this right of Indian citizens. Thank God for our Judiciary which is independent of the Legislature and Executive without which the freedom of religion along with all other rights would have remained though most desirable but unattainable.