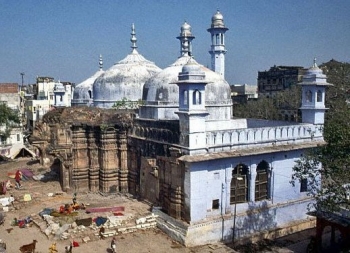 It has been the strategy of the RSS-BJP combine to make use of divisive and communal issues to climb the political ladder. By making use of Ayodhya temple issue, it could polarize the whole country and capture power in many states and at the centre. People of India reluctantly accepted the Supreme Court verdict of granting the disputed land in Ayodhya to Hindu organizations, although it was an unjust judgment, thinking that it would put an end to polarization based on religion. It is considered as an unjust judgment because the Supreme Court had acknowledged that the act of demolition of Babri Masjid was “an egregious violation of the rule of law”. Yet, the forces responsible for the demolition were given the legal possession of the land.

As the BJP has tasted the fruits of communal polarization, it is not ready to give it up. It continues to make use blatantly of divisive and communal issues not only to capture power in the state elections but also to hide its gross failures in governance. The guardians of secular democracy like the judiciary, investigation agencies and the Election Commission seem to be often failing in their duty as the watchdogs of democracy.

Raking up the issue of Gyanvapi mosque in Varanasi through a lower court judgment could be part of a long term plan of the BJP to make the communal pot boiling continuously. On 8th April a civil court in Uttar Pradesh asked the Archaeological Survey of India (ASI) to conduct a survey at the Gyanvapi mosque to determine if a temple existed at the site before the construction.

According to legal experts, this judgment violates the Places of Worship (Special Provisions) Act, 1991, passed in the backdrop of Ramajanmabhoomi movement demanding that a Ram temple be built at the site of the Babri Masjid in Ayodhya. According to this law, all places of worship in the country will remain as they were on August 15, 1947, and cases seeking conversion of a place of worship to that of other religion or faith “shall abate” with the commencement of the law. The only exception was the Ayodhya land dispute.

Secondly, the order of the civil court has come less than a month after the Allahabad High Court reserved orders on petitions that challenged the very maintainability of lawsuit in which the plaintiffs claimed that Mughal emperor Aurangazeb ordered the temple to be demolished in 1669 and the current mosque was built in its place using material from the demolished structure. The civil judge could have waited for the verdict of Allahabad High Court instead of issuing an order to the ASI. The judgement has set in motion a highly controversial set of events that could have severe political implications.

The order of 8th April came in the backdrop of the Supreme Court on March 25 issuing notice on a Public Interest Litigation filed by BJP Rajya Sabha member Subramanian Swami challenging the constitutional validity of the Places of Worship Act. However, the court has not issued a stay on the enforcement of the act. The circumstances of these two developments indicate a wider political game plan of the Sangh Parivar to rake up controversial religious issues, even involving the judiciary, in order to make religion based polarization a continuous process and to remain in power.

Pratap Bhanu Mehtha in his article in The Indian Express on 13th April 2021 (Weaponising faith: The Gyanvapi Mosque-Kashi Vishwanath dispute) has hinted that the purpose of raking up the issue of Mathura and Kashi is “to permanently indict minorities; it is to use a sacred place of worship as a weaponized tool against another community”. He further writes, “It is also an indication that Hindutva in its present form can never be satiated; it is an escalation of power that constantly demands more. Yesterday was Ayodhya, tomorrow Kashi, the day after Mathura. It has been emboldened by the lack of resistance amongst Hindus and the increasing isolation of minorities”.

The appointment of the retired judge Surendra Kumar Yadav, as the deputy lokayukta in UP, an anti-corruption watchdog, raises a lot of questions on the impartiality of the BJP government because he gave a verdict favourable to BJP in the high-profile Babri Masjid demolition case last year.  As a judge of the special CBI court, Mr. Yadav acquitted all the 32 accused, including BJP veterans like LK Advani, MM Joshi, Uma Bharati and Kalyan Singh.

A question arises in the minds of the people whether the BJP government is rewarding the judges who gave judgements in favour of it or whether it is a signal to the sitting judges to deliver favourable judgements in crucial cases. The appointment of Ranjan Gogoi, the former Chief Justice of India, as a member of Rajya Sabha by the BJP government is widely perceived as a reward for delivering a favourable verdict on Ayodhya Ram Janmabhoomi dispute.  Raking up the issue of Gyanvapi mosque in Varanasi through judicial process, followed by the appointment of the retired judge Surendra Kumar Yadav as the deputy lokayukta, creates many doubts and anxieties in the people of India about the future game plan of the BJP.

A question may arise why the Hindutva forces go on raking up controversial issues that divide people on the basis of religion. There could be two reasons. First of all, any political party that has an ideology that supports an extreme form of nationalism should have an enemy. For BJP this enemy has been Muslims. In order to unite the Hindus, who are divided into different castes with their own vested interests, it is essential to point out an enemy to unite them. The RSS-BJP combine has succeeded to a great extent in this game.

According to MS Golwalkar, one of the ideologues of RSS, the three internal enemies of the nation are Muslims, Christians and Communists. The RSS-BJP combine has been targeting all the three in their assent to power in varying degrees, but the Muslim have to bear the brunt predominantly. The BJP also could finish the political power of the left parties in West Bengal and Tripura. The next target of the BJP is the left parties in Kerala. Hence in order to sustain itself in power the BJP will continue to use all the ‘three enemies’, and the focus on any one of the three may change from time to time according to the situation. It will not be able to exist without an enemy and dividing the society on the basis of religion or any other issue in order to polarize the majority Hindus.

The second reason is very obvious. The BJP has been a failure on the governance front on many counts:  economic growth, creation of jobs, reduction in corruption, human resource development, reduction in hunger and inequality etc. India’s ranking on the Corruption Perception Index-2020 slipped from 80 to 86 among 180 countries as per the 2020 report of Transparency International.

India ranked 94 among 107 nations in the Global Hunger Index (GHI) 2020. India performed worse than Pakistan and Bangladesh. According to the report, 14% of India’s population is undernourished. It also showed the country recorded a 37.4% stunting rate among children under five and a wasting rate of 17.3%. The under-five mortality rate stood at 3.7%. With regard to human development, India ranked at 131st position out of 189 countries in the index, falling in the medium human development category with an HDI value of 0.645. In the year 2019, India ranked at 129th position.

The greatest failure of the BJP government has been in the area of job creation. The pandemic covid 19 and the lockdown that followed exacerbated the job loss. Even before the outbreak of the pandemic Covid 19 the job situation was very bad. As many as 11 million Indians lost their jobs during 2018, according to a report by the Centre for Monitoring Indian Economy (CMIE). Unemployment in the country has been a problem since 2017-18. A government job survey, whose publication was delayed just ahead of the 2019 Lok Sabha election, showed how the country’s unemployment reached a four-decade high of 6.1 per cent in 2017-18.

In order to divert the attention of people from the crucial issues of bread and butter the BJP government has focused on controversial and destructive issues. Among them are demonetization, cancelation of Article 370 and Article 35 A of the Indian constitution and bifurcation of Jammu and Kashmir state into two Union Territories, passing of Citizenship Amendment Act (CAA) and the consequent nation-wide anti-CAA protests that culminated in the East Delhi communal riot, triggered by the hate speech and anti-Muslim rhetoric of the BJP leaders, and the enactment of three controversial farm laws without any consultation with the stakeholders.

As the BJP government’s main concern has been converting India into a Hindutva Rashtra, it focused on issues related to its exclusive and divisive ideology. As a result it could not pay attention to the governance issues. When the economic issues and job loss started affecting the lives of the people, it resorted to emotional and divisive issues from time to time in view of diverting the attention of people.

As long as the people of India do not become aware of the perils of the divisive policies of the BJP, it will continue to camouflage people. When many state governments started complaining of short supply of Covid vaccines, the Prime Minister came up with an appeal to celebrate Tika Utsav (Vaccine Festival) from April, 11 to 14. Congress leader Rahul Gandhi termed it as a gimmick. He said that vaccine shortage in the country is a serious issue and not a festival.

The opposition parties are also responsible for the present situation in India. They have miserably failed to expose to people the failures and the divisive policies of the BJP government. They have also failed to come to a common platform and evolve a strategy to save democracy. According to the political observers, the Bengal election is going to be a crucial factor in deciding the future of democracy in India. The opposition parties should have come together and formed an alliance against the BJP in West Bengal.  The opposition parties, excluding Shiv Sena and DMK, have not come forward to denounce the methods used by the BJP to capture power by hook or crook. The action of the Election Commission of imposing a campaign ban on Mamata Banerjee and not taking any action on the Prime Minister and Union Home Minister for their speeches with communal overtones should have been opposed by all opposition parties. The opposition parties, including the Congress, are not ready to transcend their petty interests to save democracy in India.

People cannot be hoodwinked forever. At the same time, the civil society and the opposition parties have a great role to educate the people of India and expose the divisive policies of the BJP. If they fail in their responsibilities, the country will have to pay a heavy price.