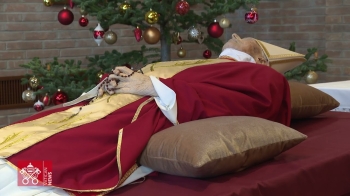 No Praise too High for Benedict XVI

While the whole world mourns the death of Pope Benedict XVI, who made an indelible mark as an outstanding intellectual and theologian, we want to recall how his theology came across to the people of Asia.

The problem with Joseph Ratzinger (Pope Benedict XVI’s original name) was that he turned his personal theological positions – which became increasingly strident, reactionary and right-wing -- into the official position of the Church without distinguishing both roles sufficiently. Some of those personal views were problematic. But then he saw his theology as the official theology of the Church, which he could impose on Asia and elsewhere, thanks to his powerful perch as Prefect of the Congregation for the Doctrine of the Faith (CDF). This was something quite disconcerting for Asian Churches and Asian theologies. The condemnation of the work of Jacques Dupuis, the writings of Antony D’Mello posthumously, the excommunication of Tissa Balasuriya, and the processes instituted against several other Asian theologians were received in Asia as an imposition of Ratzinger's personal theological views as the orthodox views of the official Church. The document Dominus Iesus was viewed in Asia as an attempt to quell the blooming of creative theology in this continent.

Ratzinger's theology was profoundly influenced by St Augustine and tended to be a dualistic setting in opposition the world and the Church, Christ and culture, science and theology, and so on. Ratzinger highlighted the fallen state of humanity owing to original sin. Hence, no wonder that in his inaugural discourse after assuming office, he spoke of how “the human race -- every one of us -- is the lost sheep in the desert which no longer knows the way". The church is, for him, the true path-finder out of the desert. As the Prefect of the CDF, in 1990, he even seemed to justify the trial of Galileo and his condemnation by the all-knowing Church, which left many scientists and scholars aghast. But then Pope John Paul II, after two years, apologized for the error the Church made in the case of Galileo, which pacified the scientific community to some extent.

Ratzinger viewed dialogue with the world, its modernity and developments as a compromise with ungodly ways since for Christians, the world is but an exile -- the city of man waiting for the city of God. Thanks to the Augustinian heritage he imbibed in his own way, Ratzinger’s theology became quite reactionary to the developments in the world and was not ready to listen to the speaking of God through the world and the signs of the times. Similar to the Protestant dialectical theology of Karl Barth, Ratzinger created an opposition between the Church which is the locus of God's revelation and the world where the Church has an obligation to proclaim the truth and reform it. As he said in his sermon at the mass inaugurating his pontificate, "The Church holds within herself the future of the world, therefore shows each of us the way towards the future”.

This Church is, for him, primarily the Universal Church, with little recognition of the diverse contexts, cultures, and historical circumstances of the local Churches. In a document he issued as the Prefect, he had said, “the universal church ... takes precedence, ontologically and temporally, over the individual local churches.” Such a view also underlies his policies and actions as a Pope towards the local Churches.

No wonder that during his pontificate, Asian Churches felt that they did not enjoy the legitimate autonomy and freedom about which Vatican II spoke in unambiguous terms. He felt obliged to defend Vatican II as a continuation of traditional teachings and, in this way, let its vision and novelty get obscured and obfuscated, evidence of which was his resurrecting of the Tridentine Latin Mass. In an interview he gave as Cardinal Prefect, he compares the new initiatives in the Church to a building-site where everyone builds and where the architectural plan is lost. His centralizing and architectonic view of the Church prevented him from sensing the originality and novel experiences in the Asian, African, and Latin American local Churches and their unique contributions to building the Church. His opposition to liberation theology in Latin America and elsewhere was a glaring example.

The Augustinian dualism in the theology of Benedict is in striking contrast to the integral and holistic Asian vision of reality and the recognition of the basic goodness of God's creation and the Asian view of the human condition. Asian theology follows a path of search, a journey when it is the question of truth that surpasses any attempt to grasp it fully and definitely. This, unfortunately, has often been characterized as relativism.

When Cardinal Ratzinger, in his funeral sermon for John Paul II, denounced "the dictatorship of relativism”, one could imagine the direction his pontificate would take. When he said those words a few days before his election, he probably had, among others, Asian theological approach in mind. Asian theologians and Federation of Asian Bishops’ Conference (FABC) repeatedly felt misunderstood and maintained that the stigma of relativism does not apply to them. Reflecting and contemplating the inexhaustible mystery of God allows many angles and viewpoints and a wide diversity of experiences.

Ratzinger’s theology, in my view, was also tinged by the German idealism of Kant and Hegel. He is an example of how our ways of thinking and theologies are conditioned by our own cultural environment and history. Ratzinger sincerely thought that, given certain unshakable theological premises, one could arrive at definite conclusions about the history and the empirical day-to-day reality of life without having to examine and study these closely. It is a theory of everything claiming a monopoly of truth. Everything becomes so clear and definite in his theology that there is hardly any room for wonder and surprises of God as bound to be in a wayfarer Church. Given this idealistic penchant in his theology, he could think of making definite conclusions a priori about Islam, Hinduism, Buddhism etc., even without the need to study them seriously!

This idealistic and a priori approach could also be seen in his views on the developments in the modern world. Unfortunately, his ideas were exploited by right-wing Catholic groups and movements which tried to stall any radical reform in the Church. Under a conservative theological cloak spread by Benedict XVI, careerism and infighting thrived in the central administration of the Church and several financial scandals were breeding and started to show their ugly heads by the end of his pontificate.

Though, as I noted, Ratzinger's theology was enveloped in Augustinianism and German idealism, there were some streaks of originality and foresight in his thinking. For example, looking at the condition of Christianity in Europe, he could surmise already in 1968 that “the lot of the Church is going to be one that of a small flock. From the crisis of today, the Church of tomorrow will emerge -- a Church that has lost much. She will become small and will have to start afresh more or less from the beginning …”.

The other radical revolution was his retirement when he felt that his physical powers could not cope with the highest responsibility in the Church.

Pope Benedict XVI will be remembered, if not for his theology, for his bold resignation, which is pregnant with great theological significance for understanding ministry in the Church at all levels. It was a unique and courageous act of stepping down, serving as an excellent precedent for the future. He underlined through his resignation that even the Pope is not free from the deterioration and weakening of the body with advancing age.

I think what Pope Benedict did holds lessons for many Indian and Asian prelates who, unfortunately, hang on to their positions and are glued to their chairs, even when the whole world knows that they simply do not have the physical strength and the mental agility to perform their duties as the pastors of their local Churches. Rather than serving the Church, they become a burden to the Church and a roadblock to its future.

The courage of Benedict XVI stands in bold relief contrasted with his own predecessor John Paul II who espoused a “theology of the cross", echoed by his papal entourage. He thought he was nailed to the cross to carry on his primatial role even in extreme physical illness. Benedict, through his gesture, proclaimed that nobody – even the highest minister in the Church – is indispensable and that biology is the same for all human beings. No praise is too high for Benedict XVI.