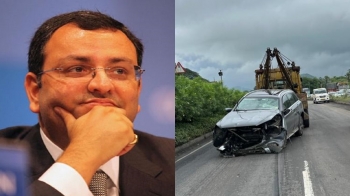 No Substitute for Safe Driving

The manner in which former Tata Group Chairman Cyrus Mistry was recently killed when his Mercedes GLC 220d 4MATIC car (costing a whopping Rs 80 lakh on road approximately) hit road divider on a bridge over the Surya river in Maharashtra's Palghar is rather traumatic.

According to the CCTV footage and preliminary investigation, reportedly the car was being driven by Cyrus' family friend Dr Anahita Pandole apparently at a speed of 180-190 km per hour.  The faulty design of the bridge parapet wall (an infrastructure issue) is also stated to be a cause for the car crash.

So it is because of multiple factors like over-speeding and the error of judgement by the driver, the accident is believed to have taken place. It is also stated that Cyrus and his friend Jahangir Pandole both seated in the rear who were not wearing their seatbelts died on the spot.

There have been a lot of reactions in wake of the death of Cyrus. Mahindra Group Chairman Mr Anand Mahindra was quick to urge all passengers to take the pledge to wear seatbelts asserting that he always wore his seat belt even when in the rear seat of the car.

While the ongoing investigations are expected to unravel what actually happened, lets for a moment rewind some 60 plus years back when cars manufactured even in developed countries had no basic safety features.

In 1956, Ralph Nader who was researching automotive safety as a second-year student at Harvard Law School published a book “Unsafe at Any Speed: The Designed-In Dangers of the American Automobile" in 1965 in which he portrayed how car manufacturers rejected safety features, like seat belts in favour of looks and comfort. The book not only was a best seller but made Ralph Nader famous as an influential consumer advocate.

In about 10 months after the book was published reportedly US President Lyndon B. Johnson signed the National Traffic and Motor Vehicle Safety Act, requiring the adoption of new or upgraded vehicle safety standards, and creating a dedicated agency - the National Highway Traffic Safety Administration - to enforce them and supervise safety recalls. Under the Motor Safety Standard, which took effect on 1 January 1968, all vehicles (except buses) have to be fitted with seat belts in all designated seating positions.

With the amendment to the Motor Vehicles Act in 1993, seatbelt was made mandatory for the driver's seat in respect of four wheelers manufactured in India after March 1994.

With Delhi alone accounting for nearly 150 deaths due to road accidents every month, in December 2001, a three-judge bench of the Supreme Court issued directions for mandatory wearing of seat belts for front seat occupants in cars. In 2003, the Motor Vehicles Act was amended making it compulsory for all occupants in a four-wheeler to wear a seatbelt. According to Rule 138 (3) of the Central Motor Vehicle Rules, passengers in the rear seats are required to wear seat belts. It's violation, attracts a penalty of Rs 1,000.

Following the Cyrus mishap, as an immediate measure, the local police have asked the Central Institute of Road Transport, Pune for undertaking a road safety audit of black spots done at national and state highways within the jurisdiction of Palghar to rectify structural faults if any.

The police have also requested the National Highways Authority of India to install signages, cat-eyes, rumble strips and radium reflectors appropriately so as to alert motorists.

Use of seat belts and airbags, as studies have shown, increases the safety of passengers in case of a crash. The seatbelt holds the passenger in place while the airbag helps to cushion the head and chest from any avoidable injuries during an impact.

That not using a seatbelt can prove fatal is substantiated by official statistics: 26,896 people had died due to non-use of seat belts in accidents in 2017 and 16,876 of them were passengers.

Not long ago, a road safety study commissioned by Maruti Suzuki across 17 Indian cities found that only 25 percent of car occupants use seat belts.
While 32 percent of those surveyed blamed a weak legal enforcement for not buckling up, 27 percent felt seat belts impacted their image, 25 percent didn't use didn’t seat belts as they considered it to damage their clothes, 23 percent didn’t consider seat belts safety devices at all and 20 percent of those surveyed also didn’t feel the need as their family and friends seldom used them.

With the stark reality before us, isn't  it time we realise that road safety doesn't happen by accident.

Now that Union Transport Minister Mr Nitin Gadkari has stated that wearing seat belts is to be made mandatory for all passengers including rear seat passengers, things are bound to change in terms of safety.

The new rule, to be put in place shortly, will empower the traffic police to impose a fine of Rs 1000 on the drivers of those cars in which rear seat occupants are not wearing seat belts. The issue of many vehicle owners using clips as an alternative to not wearing seat belts, to avoid the sound alerts of seat belts, is also being addressed and cameras that will be installed everywhere would detect such defaulters.

Those in the higher echelons of power need to address road safety in a holistic manner. Apart from raising public awareness, and imposition of fines, the certainty of punishment will serve as a deterrent.

There is an imperative need to enforce rules related to speed limits, seat-belt wearing, lane discipline etc., in the right earnest, to bring about the expected reduction in road traffic fatalities.

There have been suggestions from some quarters that using technology it ought to be made impossible to operate a motor vehicle if seat belts are not fastened.

Self-discipline in adhering to all safety precautions while driving will prevent accidents.

Please appreciate that there is no substitute for safe driving.

Better to be safe than feel sorry later.

Our safety is in our hands.