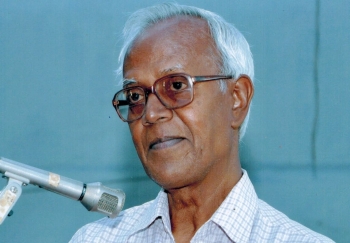 This is a joint initiative of the Society of Jesus (the Jesuits)and other religious Congregations present at the United Nations, particularly the Claretians.

We are requesting individuals and organisations to join this initiative by signing the appeal
You are welcome to sign in your individual capacity or on behalf of the organization that you represent the appeal which  is being sent to OHCHR, related special rapporteurs and also to the Government of India.
We also request you to  forward/ circulate this widely to your contacts and networks for greater reach. Thanks

Fr. Stan Swamy, SJ is an 83 years old Indian Jesuit priest incarcerated for alleged anti-national activities. He was arrested on October 8, 2020; and 15 January will mark ONE HUNDRED DAYS since his arrest!

The antecedents of this case can be traced back to 1 January 2018 violence against the Dalits across the state of Maharashtra. One Dalit youth was killed and countless of number of Dalits injured.  Even though all evidence pointed to the role of right-wing leaders in the violence that erupted after the annual celebration at Bhima Koregaon, the state thought it convenient to foist false cases against human rights defenders who are known to stand up for the poor.
Fifteen others have been incarcerated for the same alleged violations of the draconian Unlawful Activities Prevention Act (UAPA). The state alleges that all these 16 persons are working in tandem with the banned Maoist party that wants to overthrow the elected government.

It is common knowledge that these allegations are foisted by the present ultra-nationalist, right-wing Hindu fundamentalist government. Ever since the party came to power in 2014 it has used various pillars of governance and the media to put down all dissent against its anti-poor, anti-minority, pro-crony capitalist policies.

Fr. Stan is best known for his long years of work on behalf of India’s poorest by becoming one like them and leading their struggles in a non-violent way making use of all the legal instruments to redress the violence against them and reclaim their livelihoods for them. The other 15 co-accused are all eminent human rights defenders known for their dedicated and courageous work in defense of the rights of the poor.  Some of the accused like Varavara Rao are seriously sick and advanced in age. Yet a callous government is relentless in its vindictive pursuit of these human right defenders. To give but one example, it took the government all of 30 days to grant permission for jail authorities to provide a sipper to Fr. Stan, who suffers from debilitating Parkinson’s disease.  Their appeal for bail has been consistently denied by the State.

OHCHR has already taken note of the situation and has appealed to the government of India to honor its obligations under International Covenant on Civil and Political Rights. These interventions so far have not brought any relief for the accused.
We request the OHCHR to intervene in this serious matter once again and  immediately