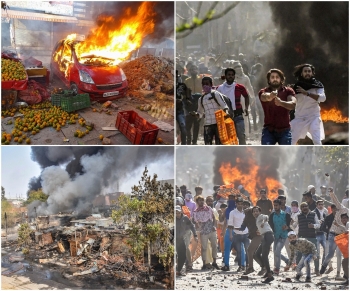 Instead of providing timely relief and help them rehabilitate, the state and police have been persecuting the victims, mainly Muslims, of the February 2020 communal violence in North East Delhi, a report by a Citizens’ Committee comprising eminent jurists and a former Home Secretary of the Union government has found.

According to the report, polarisation between communities, particularly anti-Muslim hate, was deliberately fueled in the months preceding the violence. The Muslim community was grappling with deep fears of loss of citizenship due to the Citizenship (Amendment) Act, 2019 passed by the Parliament in December 2019, and by mid-December 2019 nationwide protests erupted against the law. Delhi emerged as the epicentre of the anti-CAA protests, with North East Delhi as the site of several sit-in protests.

Against this background, campaigning for the Delhi Assembly elections gathered momentum in January 2020.The Bhartiya Janata Party (BJP) focused its election campaign on anti-CAA protests framing it as anti-national and protesters were labelled traitors by BJP leaders.

While the violence in North East Delhi first broke out as a clash between pro-CAA and anti-CAA camps, it soon became a full-blown communal violence between Hindus and Muslims because of the anti-Muslim hate build up during the election campaign. While mobs clashed and caused serious disruption of normal life in North East Delhi, Muslim homes, businesses and places of worship were specifically targeted from February 23 to 26, resulting in the death of 40 Muslims and 13 Hindus.

The response of the state and the police to the targeted violence against the Muslims in North East Delhi has undermined all democratic values, the Committee has found. The Delhi police failed to take any punitive action against hate speeches made by political leaders in the run up to the outbreak of violence on February 23, 2020. In fact, the police assisting violent mobs and participating in attacks on Muslims, anti-CAA protest sites, and mosques have been documented in eyewitness and media accounts according to the report of the committee.

It is the Delhi police case that the violence was the product of a grand conspiracy by certain groups and organisations of Muslims protesting against CAA in order to compel the Union Government to repeal the law. However, manufactured evidence deviously produced in various chargesheets contradict this narrative, the citizens report has pointed out quoting various court orders.

In an incident on 24 February 2020 at about 4 p.m. five Muslim youths were brutally assaulted and publicly humiliated by police officers who taunted the young men saying ye to azadi (here is your freedom) and forced them to sing the national anthem. One of these young men, 23-year-old Faizan, was wrongfully confined in Jyoti Nagar police station till 11 p.m. on 25 February. He died at Lok Nayak Jayaprakash Narayan hospital on 26 February after his release.

According to the post mortem report, Faizan died due to cerebral injury along with multiple injuries all over his body caused by blunt force impact. The medical board of the JP hospital also opined that the injuries on Faizan’s head could have been caused by a hard and blunt object such as a lathi. The post mortem report makes it very clear that Faizan died on account of the injuries suffered during the assault or while he was illegally detained at the Jyoti Nagar police station for more than 24 hours.

Though an FIR charging murder was registered the Delhi Police have not yet arrested the assailants, in this case policemen. In response to a writ petition filed by Faizan’s mother seeking a time-bound, court-monitored investigation, the Delhi police filed a status report admitting that the video footage available in the media showed Faizan and others being beaten by policemen. However, the police claimed that the videos were blurred and the assailants were wearing helmets and safety gears and therefore unable to identify their own men accused of murder.

Commenting on the shoddy investigation into the communal violence, a magistrate in the State v. Shah Alam case said: I am not able to restrain myself from observing that when history will look back at the worst communal riots since partition in Delhi, it is the failure of the investigating agency to conduct proper investigation by using latest scientific methods that will surely torment the sentinels of democracy. The sort of investigation conducted in the instant case and the lack of supervision thereof by the superior officers clearly depict that the investigating agency has merely tried to pull the wool over the court’s eyes and nothing else.

A fact-finding report published by the Delhi Minorities Commission (DMC) has stated that the Delhi police failed to prevent vandalism of Muslim places of worship. In the case of burning of Madina Masjid, the complainant Haji Hashmi Ali, the caretaker of the mosque, had to approach the Metropolitan Magistrate as the police refused to register an FIR regarding damage to the mosque.

In fact, going through various cases against Muslims, the Delhi police would have us believe that the Muslims organised riots in Muslim-dominated areas, killing mostly Muslims and destroyed mosques in protest against CAA which is discriminatory towards Muslims!

In fact, investigations in the recent conspiracy cases under UAPA have been plagued by the phenomenon of staggered arrests resulting in inordinate delay of the trial. It is only when the 180 days for filing the charge-sheet for the initially arrested accused is ending that a second set of accused are arrested. A further 180 days’ time is then sought for filing the chargesheet. This is then followed by a third set of arrests further delaying trial and keeping the arrested in jail without bail for years. It looks as if the investigating agencies are using the stringent provisions of the UAPA not to convict the arrested but keep inconvenient people in jail.