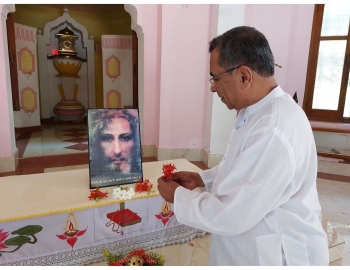 In February 2017, I was in Rome to attend the marriage of my niece to an Italian. The nuptials were held in the church of San Giuseppe Dei Falegnami constructed above the Prigione Dei SS Apostoli Pietro e Paolo, near the Roman Forum. This is where Peter and Paul were imprisoned by the Romans.

This September I met another Peter who had been in jail. He was Peter Shivdas Menon (68). Our conversation took place in the dining room of Matridham Ashram, Varanasi, just below a sign that read “Silence please”. Not one to easily follow such impositions, I learnt about Peter’s amazing story. Had I obeyed the rules I may have missed it! I subsequently invited him to my room to record his testimony.

Menon was working in an international bank in New Delhi when he was arrested in 2003 for alleged fraud and misappropriation and thrown into jail. The court was willing to enlarge him on bail against a security bond of Rs 60,000/-. His wife, herself a lawyer, did not come to the court room, and having nobody else in Delhi, he was sent back into judicial custody.

Two months later, a Vincentian priest and a sister belonging to the Sister Adorers of the Blessed Sacrament visited him in jail, as part of their prison ministry. The priest told him that he had a dream in which they had been directed to an under-trial in Jail No 4. That was Menon. They told him to believe in Jesus and his travails would end. They gave him a New Testament, a rosary and a Malayalam prayer book. In sheer disgust he threw them in a corner of his cell.

Within a year Menon had 12 more cases arraigned against him. His wife also filed for divorce on the specious grounds that he had been incarcerated. Menon was shattered and decided to end his life by banging his head against the metal grill of his cell.

But the jail warden noticed this and sat outside his cell telling him that if every prisoner thought like that then the prison would become a graveyard. Menon was livid with rage. A fellow prisoner had placed a cross and a picture of Mother Mary on the wall of the cell. After defiling them he noticed the prayer book and rosary lying in a corner of the cell.

He picked up the rosary and started chanting the name of Jesus. He now saw a piece of paper falling on which was transcribed “Isaiah 41:10”. It read, “I have chosen you, I have not rejected you, do not be afraid, for I am with you, for I am your God. I give you strength, truly I help you, truly I hold you firm with my saving right hand”.

After multiple readings it now dawned on Menon that indeed there was a blessed assurance. It reminded him of what his prison visitors had earlier told him: “Become a believer in the Lord Jesus and you will be saved” (Acts 16:31).

Maundy Thursday had special significance in Menon’s story. On that day in 2004 he had a dream of walking in a dark lane, when a white Ambassador car drew alongside and he was pulled in by a person with long hair and a countenance shining like the sun. Like a Tesla, the car had no driver.

The next day, Good Friday, while reading the Bible he found himself burning in a fiery well. Then on Easter Sunday he felt somebody holding him from behind and shaking him vigorously. These experiences were driving Menon crazy.

When they were narrated to the prison visitors at their next visit they told him that indeed it was Jesus calling him. In a plea bargain, Menon said that he would believe in Jesus only if he was exonerated and released from prison.

Over the next year there was no real progress in his cases. As often happens in our judicial system, all he got was multiple adjournments. Come Maundy Thursday 2005 and he had another dream, this time in the lap of the same person that he had “met” in the car. He touched Menon’s forehead. There was a wound mark on his wrist. He said to Menon, “Before Easter Sunday next year you will be out of jail”. This was hard to believe as thirteen cases were still pending trial.

But the Lord was true to his promise. One by one, the cases against him were dismissed. By October 2005 only the original case remained. In that he was convicted to 5 years of rigorous imprisonment and a fine of Rupees One Lakh. He did have the option of appealing to a higher court. Though offered an amicus curie, he chose to plead his own case.

Ten days before Maundy Thursday 2006 the appellate hearings were completed. On subsequent days he was taken to the court for the pronouncement of the judgement; but the judge was not available. The countdown to the Easter 2006 release had begun.

The 13th April was Maundy Thursday. He was back in court but the judge was not there. In the afternoon the judge said that he would pronounce the verdict in his chamber at 4.00 p.m. The cops accompanying Menon told him that this was the end of the road as this was a very strict judge. It was easier to escape from the jaws of a lion than from the clutches of this judge.

But miracles never cease. At the appointed time the judge pronounced him “Not guilty”, absolving him of all charges and ordering the bank to pay him compensation for filing false and fabricated cases. On 15/4/2006, the eve of Easter, Menon walked out of jail, a free man. The Lord’s promise had been fulfilled. Alleluia!

On Easter Sunday Menon entered a church to attend Holy Mass for the first time. Seven years later he was baptised in the Bishop’s House, Faridabad, taking the name Peter. He decided to dedicate his remaining days to bearing testimony to the God of love and mercy who was faithful to his promises.

Had I kept “silent” in the dining room and followed the rules, I would never have known Peter’s amazing story that I am now sharing. This was déjà vu, history repeating itself. In the Acts of the Apostles we read of Peter, Jesus’ chosen successor, being incarcerated twice, once by the jealous priests and then by King Herod.

“The High priest intervened with all his supporters … Filled with jealousy they arrested the apostles and had them put in the public jail. But at night the angel of the Lord opened  the prison gates and said as he led them out – Go and take up position in the Temple and tell the people all about the new life” (Acts 5:17-20).

“On the night before Herod was to try him, Peter was sleeping between two soldiers, fastened with chains, while guards kept watch at the main entrance to the prison. Then suddenly an angel of the Lord stood there and the cell was filled with light. He tapped Peter on the side and woke him. Get up he said. Hurry; and the chains fell from his hands … He followed him out, but had no idea that what the angel did was all happening in reality; he thought he was seeing a vision” (Acts 12:6,7,9).

Was Peter’s life a dream or a vision? I am reminded of what former President APJ Abdul Kalam said: “A dream is what you see in your sleep at night. A vision is what keeps you awake all night”. Missionaries are called to be visionaries.

Missionaries also need to beware of those who oppose their mission, the High Priests and the Kings – those who irresponsibly wield enormous religious or temporal power over their followers or subjects. Missionaries and visionaries, “Arise”. Break the laws of silence. Speak out. Stand up and be counted. Break the shackles that keep you enslaved and experience “the glorious liberty of the children of God” (Rom 8:21).

(Menon’s testimony was recorded in Matridham Ashram, Varanasi, during the writer’s recent spiritual journey there)