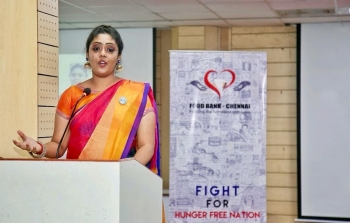 Her grandparents’ charity of distributing food to beggars on varying occasions had inspired Sneha Mohandas. She too followed their footsteps by giving food on Thursdays near the Sai Baba temple. But gradually the young Visual Communication student of Chennai realised that sort of occasional arms will not solve the world’s hunger.

Sneha wanted to do something permanently for them. ‘Why not I cook a little extra food and give it to at least one hungry person every day? If everyone does like that, then there will be no hungry person in the world,’ she mused.

Wanting to create a platform for people to participate, the 23 years old young lady started a Facebook group called Food Bank - Chennai in June 2015, with her close friends and relations.

The idea is simple. Every family cooks a little extra food. That extra food is offered to a hungry person. If that family is unable to distribute it, the volunteers will collect the food packets from your door and distribute it to the needy.

She doesn’t want to give them the leftovers from the house or hotels. What she wants you to give them is home prepared fresh food. Besides being healthy, that will give them the taste of the family too. “The weak and poor deserve home cooked healthy food, not the unwanted food,” she explains.

She recommends distributing the food packet by you personally. She says you will be rewarded to see their brightened faces and grateful smiles, besides “their blessings”. Your interactions with the needy will also sooth his/ her inner wounds – as well as yours.

Since many volunteered to become members, Sneha opened a WhatsApp account for different areas to make the process easier. She confines her Food Bank now only to Chennai. The volunteers are divided according to their areas in the city.

In the first month itself 55 packets per day were distributed to the starving in T Nagar. Within five years there are 2895 members distributing food packets in and around Chennai. And their number continues to grow. Until today around 12,000 food packets have been distributed.

Selva Ganapathy is one of the volunteers who collects the food packets from the families and distributes them to the poor. He has heard many touching stories from them. According to him, many of these beneficiaries are elders, who had been turned out by their children. Interacting with them he prepares a database, which he hopes will serve to permanently solve this problem.

Appreciating Sneha’s humanitarian work, Prime Minister Narendra Modi asked her to be one of the seven women to take over his official Twitter account on the International Women’s Day in 2020.

Sneha says, “In the next few years I wish to see every street dweller sleep in peace having had their three meals for the day.”

Thus she hopes to eradicate hunger from India.

“If you can’t feed a hundred people, then feed just one,” says Mother Teresa.