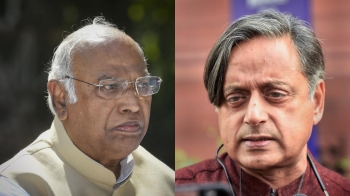 Shashi Tharoor’s not reaching the winning line in the race to the Powerhouse base in the recent Presidential election was not surprising to many election watchers.  A fake modern-day Tenali Raman may describe Tharoor’s performance as, “Shashi did not lose, but the old veteran won by going up.”

Whether Raman’s quick-heal daub on Tharoor was soothing or scalding, Shashi might have taken everything on its stride. Look at the way he rose to the occasion by riding up to Kharge’s residence in haste to congratulate him in gentlemanly fashion.

The way this former U N diplomat reacted to his not getting even an appreciable number of votes was not any exercise in diplomatic duplicity. He admitted that there were miles to go in serving the nation even if he did not get elected to the post of the President. That is gentlemanly on his part.

As a public intellectual, the 66-year-old young Tharoor vibrates with the passion of his heart and the reason of his intellect. That was evident in his election campaign. He passionately hoped that he would cross the winning line. But, with his head on his shoulders, he was intelligent enough to read the signs of the times by admitting that it was worth jumping into the fray to demonstrate that there was space for democratic functioning in the grand old Party.

This is not a eulogy for Tharoor the politician. But this reflection is meant to point a finger at the way many politicians behave today. Elections come and elections go. What matters is serving the nation as an honest civil servant or a decent bureaucrat. Today we see politicians in many hues and artificially painted feathers. Yesterday they had donned rainbow colours, but a day later, they show chameleon colours. At the time of elections, they crawl before us on all fours with sky-high promises. After their winning, we gauge their wheeling and dealing and rate them as liars and jumlabajs.

Such politicians throw all human values and calls of conscience to the four winds and become society’s termites or parasites. They can hoodwink the ignorant and the unsuspecting public who get mesmerized or even dazed by illusions as if in a Kollywood theatre. They are adept in using their blind followers as foot soldiers or mobs to go bulldozing, thrashing, lynching and killing.

It is seen that many take to politics seeing it as a refuge of illiterates, unemployed or wealth grabbers. When they are in positions of power by hook or crook, they sell their conscience for a farthing and become fence jumpers, jumlabajs or party hoppers waiting to jump into luxury vehicles to get offloaded in star hotels for the crumbs of crores.

Politicians bereft of values care least for genuine religious tenets and recruit unemployed and criminal-minded people and inject into them the venom of religious fundamentalism.  Then their acolytes are given a free reign to unleash terror in prayer centers, shrines, churches or mosques.

The most disgusting phenomenon that shocks men and women of conscience is religious terrorists invading prayer centers and forcing the worshippers to intone invocations of the invaders’ religion.  One can imagine their fiddling backstage masters chuckling and giggling with impish satisfaction even as they visit minority shrines for a handshake for the sake of photo ops.

The recent incident of Nigerian students chased by Indian students and forced to take refuge in the Nigerian embassy has attracted international mileage and worldwide condemnations. If the Muslim Arab world is angry with such happenings of escalating anti-Islam terrorism, whom are we to blame? People whose values are coffined don’t realize that, when they point a finger at someone, four other fingers are pointing back at them for their indulgence in homegrown religious fundamentalism and terror politics.

When our politicians are busy with bulldozer politics and political opportunism, they care least for the safety and welfare of the governed. When the nation is getting dragged into the quagmire of poverty and unemployment, the leaders are busy with picking holes on one another and indulging in channel presentations rather than taking appropriate measures.

When the Rupee value has gone down to the dogs, instead of plugging the loophole, the minister in charge of finance is showing that she is in the loop about the American Dollar and praises sky-high the Dollar’s high jump with ease and the poor Rupee’s sky jump without a parachute.

Should not our political pundits learn a lesson or two from the British Prime Minister Liz Truss who resigned on the ground that she was incapable of managing the country’s economic stress. With soaring unemployment and skyrocketing prices, India’s common people’s purchasing power has plummeted. Thereby poverty is in the driving seat. And our political heads are apparently enjoying their back seat comfort ride.

How is that our governing dispensation does not read the signs of the times when the world outside takes serious note of India’s downslide into hate culture and minority bashing, and its mishandling of its democratic health?

We cultivate law makers like Nupur Sharmas, Parvesh Vermas and Naveen Jindals for their boundless energy in becoming the nation’s hate-spewing ambassadors.  We accord honorable place to Puja Shakun Pandeys who, under public gaze, shot and set on fire Mahatma Gandhi’s effigy in Aligarh even as the country was observing the death anniversary of the Father of the nation.  People graduate to become experts in training social riffraff to function as foot soldiers for lynching, thrashing, gate crashing, and for engaging in overzealous terrorist activities under the very gaze of their drill masters.

In a recent publication, To Kill a Democracy: India’s Passage to Despotism by Debashish Roy Chowdhury and John Keane {OUP, 2021}, the authors point out that “When democracies rack and ruin their social foundations, they don’t just kill the sprit and substance of democracy, they lay the foundations of despotism.”

Pointing out that India is the largest democracy by population {33% of the total population of all democracies}, they ask if the alarm bell about India’s democratic health is not tolling? “Democracy is much more than elections and separations of powers. It is a whole way of life lived in dignity.”

Gorge Orwell had already warned nations about eight decades ago: “A society becomes totalitarian when its structure becomes flagrantly artificial: that is, when its ruling class has lost its function but succeeds in clinging to power by force or fraud.”