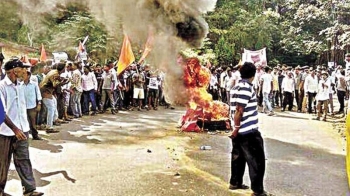 Politics of Violence: Why does it Continue Unabated?

Times of India Indore edition on 9th November 2021 published four incidents of violence, two on its front page and two on the fourth page. A tribal man and his two sons, aged 13 and 18, were tied to a heavy motor pump and thrown into a well to drown and to die. It happened in Salana village of Ratlam District of Madhya Pradesh on 7 November evening. According to the Police, property dispute between two families seem to be the reason for the gruesome murder.

Two men, who opened fire during a panchayat meeting in a village in Gwalior on 8th November, were beaten and axed to death by locals. Dewas police arrested a man for strangulating a minor girl at an under construction building in Khategaon area of MP. A youth was shot at while driving a car at Sardarpura in Dhar District of Madhya Pradesh. It was reported that he was out of danger of losing life.

Killing in Kashmir has become an everyday affair. In spite of the tall claims made by the Home Minister and the central government agencies that normalcy has been restored in Kashmir after the abrogation of article 370 and article 35 A, targeted killings by terrorists continue unabated.  In a tweet on 9th November, former chief minister Mehbooba Mufti said, “Security situation in J & K has deteriorated to an extent where not a week goes by when an innocent person doesn't lose his life. It is unfortunate that despite repressive measures taken in the name of security, people are being killed and have no sense of dignity or normalcy”.

Although India did not witness any major communal riots after the north east Delhi communal conflagration in which 53 people were killed and property worth millions gutted. Many young people, including Umar Khalid, who were involved in protesting against the blatantly discriminatory Citizenship Amendment Act (CAA) are languishing in jail, being accused of fomenting riots, the real culprits are protected and even rewarded. Even after more than 20 months of the north east Delhi riots an atmosphere of violence in speech, social media messaging, writing and actions has been prevailing in India. The political leaders, whose highly provocative statements triggered violence, continue to vomit the venom of hatred and revenge.  An atmosphere of hatred and violence is prevalent in many parts of India with the active support of the right wing groups.

On 9th November, the most prominent news on the front page of the Times of India was the unhappiness expressed by the Supreme Court with the Lakhimpur Kheri probe related to mowing to death four farmers by speedy SUVs. It is alleged that one of the SUVs was driven by the son of union Minister of State for Home Affairs, Ajay Mishra Teni. The SC observed that attempts are being made to save one of the accused and said that the probe must be monitored by a retired high court judge from another state to infuse “impartiality, independence and fairness”.

Even though the critical remark of the Supreme Court regarding the Lakhimpur Kheri probe has no direct relationship with the incidents violence reported in the Times of India on 9th November, it points to the failure of ‘Rule of Law’ in different parts of India. In simple terms rule of law means that all are equal before law, including those who make the laws and who are in charge of implementing the laws. Equal access to all citizens to legal remedies is also part of the rule of law.   Any government’s prime duty is to maintain law and order without fear or favour and to bring the culprits to justice; but the UP government is often accused of trying to save the culprits and criminals who are its supporters.

Since the BJP came to power at the Centre in 2014, three trends have been noticed in India especially in the BJP ruled states, which have created an atmosphere conducive to violence. The first disturbing trend has been spreading hate and revenge against minorities, especially Muslims and Christians and the adversaries of the Sangh Parivar. The Sangh Parivar leaders, including MLAs, MPs and Ministers liberally indulge in hate speech. Elections are the special occasions to spread the venom of hatred in view of polarizing Hindu votes. Social media is being profusely used to send and forward hate messages against those who are opposed to the views and policies of the BJP and the Sangh Parivar. Thus the ground is prepared for fomenting violence. Any small incident that appears to be critical of the right wing forces triggers violence, and the police most of the time side with the right wing groups.

Secondly, the right wing groups affiliated to the Sangh Parivar are given a free hand to take law into their hands to implement its pet ideologies. These groups brazenly indulge in violence and the police instead of taking action against them often connive with them. According to an article published in acledata.com on 3/5/2021, (Cow protection legislation and vigilante violence in India) from 2016 until the end of 2020, over 50 deaths have been reported as a result of lynching or mob violence following suspected cow slaughter or trade. Compared to 2016, political violence events related to cow protection increased by over 40% in 2017 and nearly doubled in 2018.

As per a study published in IndiaSpend, 86% of those killed in cow-related violence since 2010 are Muslims and 97% of attacks took place after the Modi government came to power in 2014. Of the 28 Indians who died over the seven- year period, 24 were Muslims. As many as 124 people were also injured in these attacks. More than half (52%) of these attacks were based on rumours.

The cow protection laws passed by many state governments or made stringent through amendments have become easy tools in the hands of vigilante groups to indulge in violence on anyone who is involved in cattle and meat trade. In 20 out of the 28 states in India, the slaughter of cows and calves is prohibited. On 18 January, the Prevention of Slaughter and Preservation of Cattle law came into effect in Karnataka. Following the enactment of the law, the Karnataka Minister for Animal Husbandry stated that cases registered against “cow vigilantes” would be withdrawn. Under the new law, those who commit violence in the name of cow protection could be deemed to be people acting in “good faith”. These kinds of laws give a free hand to the vigilante groups to indulge in any kind of violence.

The cumulative effect of the freedom given to the right wing groups to take law into their hands is people losing faith in the ‘rule of law’. That could be the reason for many people resorting to instant justice instead of approaching the police and the courts.
Thirdly, draconian laws like Unlawful Activities (Prevention) Act (UAPA), sedition law, National Security Act, the Narcotic Drugs and Psychotropic Substances Act etc are used to silence and imprison the critics of the government like journalists, human rights lawyers, activists, authors, opposition leaders etc. The decision of the Tripura Police to charge lawyers, journalists and 100-odd social media users with the Unlawful Activities (Prevention) Act (UAPA) for posts on communal violence is the latest example of flagrant misuse of this draconian law.

Four lawyers from Delhi had gone to Tripura on a fact finding mission after violence erupted against Muslims in the state last month as fallout of anti-Hindu violence that broke out in Bangladesh during Durga Puja celebrations. The lawyer’s report released online, criticized targeted vandalism of mosques and shortcomings of the BJP government in dealing with anti-minority mobilizations, and recommended a judicial probe. What the lawyers did is perfectly within the rights of citizens guaranteed by the Indian Constitution and the role of civil society in a democracy in order to make the government accountable. There is nothing that incites or promotes violence in what they did.

The misuse of draconian laws by the governments against those who expose the perpetrators of violence in the name of religion, culture and ethnicity is an encouragement to those who really indulge in violence. The Tripura government wants to protect the real perpetrators of violence. The BJP governments in general, have a tendency to make use of the draconian laws to protect and defend those who indulge in violence for implementing the ideology of the Sangh Parivar.

The opposition parties, irrespective of their ideological differences, have to come together to oppose the acts of violence by the extremist groups of right and left, and violence perpetrated by the state. The action of the Tripura government against the four lawyers is an issue that is to be opposed by all political parties who believe in democracy and rule of law. The civil society organizations have to approach the judiciary against the laws that encourage or condone violence as the ‘Prevention of Slaughter and Preservation of Cattle’ law.

The mission of the followers of Jesus in the current socio-political context of India is to work as messengers of peace and reconciliation. They should not delegate their job to God and be satisfied with their routine religious activities, devotions, night vigils etc. Jesus was primarily a prophet and the disciples of Jesus are called to continue the prophetic mission of Jesus of denouncing injustice, exploitation and violence, and announcing the good news of peace and harmony. Let them listen to prophet Amos. “I hate, I despise your religious festivals; your assemblies are a stench to me. Even though you bring me burnt offerings and grain offerings, I will not accept them.  Though you bring choice fellowship offerings, I will have no regard for them. Away with the noise of your songs! I will not listen to the music of your harps. But let justice roll on like a river, righteousness like a never-failing stream”.