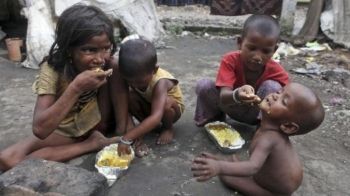 Last week, several events gained media attention. Let’s have a brief look at a few and start with one of the most glamorous ones. The fabulous bungalow that Mumbai is often likened to, was decked up like a newly-wed bride. Why should it not be? After all, the son of one of the richest persons was getting engaged.

The Internet was rife with pictures of people who attended the wedding. From famous cricketers to Bollywood celebrities to business tycoons, everyone was wearing the best of the dresses and accessories that one could think of. Many would say, what is unique in this? Celebrity events are bound to be like this.

Let’s move on to the other event. Around 100 people died of a severe cold wave in North India. Many people in the national Capital were found sleeping on footpaths, curling up their bodies, lighting up fire to get some warmth. This happened despite the orders issued by the deputy commissioner for shifting the roofless people to the night shelters!

Yes, we have people who have the best of the embellishments on the one hand while many do not even have bare minimum clothes to protect themselves from the extreme weather on the other.

To quote the latest Oxfam report titled: “Survival of the Richest: The India Story”, India has the world’s highest number of poor at 228.9 million. In stark contrast, we have only 166 billionaires, comparatively a very small number. Yet, a large chunk of the country’s wealth is in their hands.

To give a number, the 100 richest people hold a staggering $660 billion (Rs. 54.12 lakh crore). The money is sufficient to run this country for more than a year. In fact, if this money is taken away, the government would not need money for around 18 months!

In fact, more than 50 percent of this $660 billion is actually held by the top 10 richest people. It has grown by 32.8 percent since 2021. And the bottom 50 percent of the population lost around 13 percent of the national income and held only 3 percent wealth! Does it not give goosebumps? Why should there be so much imbalance? More particularly, when we call ourselves a socialist country. At least this is what is written in the preamble of our Constitution.

This imbalance is not restricted to mere figures. It does indicate an imbalance in all basic amenities one needs for survival, be it food, shelter or clothes. Small wonder that 1.77 million people were estimated to be homeless by another report last year. “More than 40 percent of these people did not get any relief during the lockdown,” says another report. In fact, circulars issued by 16 states did not even acknowledge their existence during the pandemic, forget, providing them any relief!

The pandemic has robbed the poorest of the poor of whatever they had while the rich were able to fill their coffers. To add to the woes of the poor, food inflation touched new heights both in urban and rural areas. The apex bank in an attempt to contain inflation increased the repo rate five times last year, only in vain. In fact, the middle class had to pay a higher price as the interest rate increased substantially.

The report says that 1.7 million people die every year due to diseases related to poor diet. A country that runs several schemes, including the one under the national Food Security Act, is unable to meet the most basic requirement of a human being! Should the power-that-be not have sleepless nights after reading such reports?

When it comes to health, the story is equally horrifying. In the name of universal health coverage, what people got was health insurance. However, the WHO estimates show that around 55 million people lose their wealth because of the high out-of-pocket expenditure on health. Out of this, 17 percent of households incur “catastrophic levels of health expenditure”. This also raises a question on the quality and accessibility issues concerning our health infrastructure.

As per the latest government data contained in the Rural health Statistics report, there are 1,61,829 sub-centres (SCs), 31,053 Primary Health Centres (PHCs) 6,064 community health centres (CHCs), 1,275 Sub-divisional Hospitals (SDHs) and 767 District Hospitals (DHs). If one looks at the ratio of population versus these SCs, PHCs and CHCs serve, one will assume a lot of work is being done.

However, the moment you look at the manpower shortfalls, one gets a huge shock. Except for ANMs, where the shortfall is minimum, these units fall short of 66.6 percent health workers in SCs, 74.2 percent of health assistants in PHCs, 83.2 percent surgeons, 74.2 percent obstetricians and gynaecologists, 79.1 percent physicians and 81.6 percent paediatricians. The report is silent about the shortfalls in sub-divisional and district hospitals. The urban PHCs and CHCs are comparatively better than the rural ones.

In such a situation, people in the rural regions have no option but to visit either quacks and avail of sub-standard medical facilities or visit far-off hospitals in the cities, adding on to their out-of-pocket expenditure. Clearly, the poor are becoming poorer tilting the equilibrium in favour of the rich.

The Oxfam report lays down a set of recommendations to reduce this inequality by reintroducing wealth tax. The report says even if 1 percent wealth tax is levied on the rich, it would be sufficient to meet the cost of the National Health Mission. It has proposed various ratios to meet the country’s public expenditure not only on health but also on education, mid-day meals and so on. The money could be utilised in several ways for the development of the nation, be it filling the vacancies in health centres, hospitals or schools.

However, it certainly needs a political will to devise policies that could benefit the poor while asking the rich to pay for it. It certainly speaks of a similar formula that Thomas Piketty speaks of in his book, “Capitalism in the 21st Century”. There is nothing new about this idea of taxing the rich for reducing inequalities.

Coming back from where we started, one incident that certainly shocked everyone was the announcement made by Jacinda Ardern about her resignation. It was certainly unbelievable as she was doing a commendable job as the Prime Minister of New Zealand.

While looking back at the work her government did, she said, “I’m leaving, because with such a privileged role comes responsibility. The responsibility to know when you are the right person to lead and also when you are not. I know what this job takes. And I know that I no longer have enough in the tank to do it justice. It’s that simple.”

Many might criticise her for the decision she took. What is admirable is the kind of standards she has set for political leaders globally. On the contrary, we often see hunger and greed to stay in power. The poor are used to garner votes and forgotten after the elections. They are treated as non-existent essential components of society, struggling every day for two square meals a day! What actually remains is the agenda set forth by the privileged few. And our leaders never ask whether they are the right person to lead! That's what leads to this world which works for the "Survival of the richest".