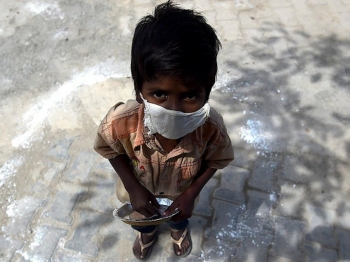 POVERTY PARADOX: Why Hunger in the Midst of Plenty?

“Give us today the food we need” is one of the several petitions in the Lord’s Prayer. It is also an invitation to live in the present – in today! This spirit of a need-based divine economy is not altogether new. In the Proverbs, we pray: “Give me neither poverty nor riches, but give me only my daily bread” (Proverbs 30:8). It is a prayer for food security, a primary concern for humans – air usually taken for granted and water also assumed to be available. But water security has indeed become a major threat along with food security, with more than 800 million of the world population being deprived of safe drinking water.

I must confess that for me, like many people, food tops my list of enjoyments. Eating together in fellowship is indeed an energizing experience. I am secretly comforted to observe that Jesus was someone who sensed that with his lifestyle that showed the importance of enjoying food with gratitude, he was likely to be termed a glutton! He relished and promoted fellowship meals. Some of his greatest teachings were shared across such fellowship tables. The Bible describes an occasion when He even prepared a meal ready for his disciples, reaching the shore after their tiring fishing encounter in Galilee. But He was concerned when people didn’t have food. He had compassion for them. And he addressed this primary concern of all beings, not just in the beautiful prayer he taught, but by ensuring food for his exhausted and hungry followers.

And World Food Day is more about securing food for all, than enjoying food. Ideally, the entire world should be able to have enough of safe and nutritious food. But far from it, there are millions in the modern, proud, progressive, prosperous, affluent world who are literally starving, dying from malnutrition and dying from having no food.

As someone who is involved in the social sector to some extent and has travelled all over the country, my first impression and response is that this ranking appears inaccurate, if not exaggerated. To our minds it might seem like India should be faring far better on the index than its neighbouring countries like Pakistan and Nepal.

The four criteria by which the GHI is calculated are: 1) undernourishment, 2) child wasting, 3) child stunting, and 4) child mortality. The Government of India has protested and has questioned its validity and reliability. In this respect, I feel the government statistics are to be considered a starting point, though validity checking measures could be employed. I am seriously doubtful if this has been done by those behind allegation regarding the unreliability of their methodology. The existence of a flagship programme called the Integrated Child Development Service Scheme with a wide network, which makes provision for almost all children requiring food in all parts of the country, makes it even more difficult to grapple with India’s falling hunger status. It should indeed be a matter of great seriousness if there is involuntary hunger on account of food deprivation or inadequacy for anyone anywhere in the country.

Besides the nationwide ICDS network, which ensures two paid and trained staff for every 1,000 people, Mahatma Gandhi National Rural Employment Guarantee Act, founded on the principle of entitlements related to right to life and livelihood, is yet another revolutionary initiative by the state, flaws in implementation of both the programmes notwithstanding. The findings by the global agency are indeed a matter of shame for all of us Indians. However, it is important to ask for and question the source of their data to crosscheck with the criteria they have set.

In the past few decades of its growth into one of the largest economies in the world, India has demonstrated that it does have sufficient resources to feed all its mouths. So it’s either a matter of missing links because of corruption or the lack of information at the level of the needy that is causing the problems, if any. There is also an issue of prioritisation.

Is the Sustainable Development Goal 2 of achieving ‘zero hunger’ a priority for the nation? Here the role of individual citizens and households becomes very significant. It has to be a duty of every citizen to ensure that there is no one around oneself who has no food to eat. The right platform would be the local self-government where each locality is represented by a local citizen who knows the small population s/he is in charge of and ought to be ever-ready to present their issues on all available platforms.

From a sustainability perspective, today our focus is to ensure that maximum families take up the responsibility to ‘grow food’ (SDG 12, responsible consumption and production) to move towards the great goal of ‘zero hunger’ (SDG 2) by 2030. Besides this, there should be voluntary initiatives (like Organic Kerala Charitable Trust, Kochi, of which I am proudly part of), focusing on identifying and preserving the food biodiversity of localities, thereby contributing towards addressing the issue of food security at the local level. If we take the example of Kerala, the immense potential of agroforestry can be very strongly promoted. The locally available, seasonal, conventional food crops of Kerala can be rich resources to rethink our food habits and take one step towards creating locally sustainable self-reliant communities.

Finally, World Food Day is not just about food production, but also about the food producers, who tend the earth and create miracles from the earth season after season on which the human world survives. The past few years demonstrated very visibly how they are at the receiving end – there is always ‘jai’ for ‘jawan’, and deservingly so for keeping our borders secure, but there is indeed a need for a ‘zindabad’ for ‘kisan’ for ensuring food security. It is rightly a day to remember with gratitude the farming community, and the divine engagement they are in. A day to reinforce honour and dignity for the farming community for their work in any given economy. And also, a day to promote a Christian culture in the spirit of ‘till and keep’ (Gen. 2:15).

I hope the local Christian communities will step beyond their ritualistic Christianity to wake up to the 21st century divine call to be the stewards of our common home, as pointed out by Pope Francis through his encyclicals ‘Laudato Si’ and ‘Fratelli Tutti’.