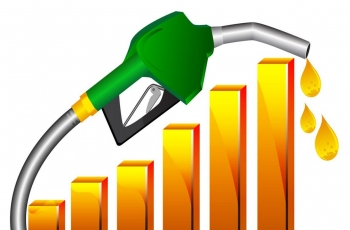 Prices Go Up, Never to Come Down

The gravitational force of the earth is something without which we cannot live on this planet. Under the influence of the gravity, we are able to walk on the earth; and the ascending objects from the earth return to the surface. A stone thrown up, comes down after going to a particular height. When the given force ends, the object comes down. No object on earth can move eternally. There is a certain point at which it has to come down. It is the universal phenomenon of the earth and the unwritten law of gravitation.

But India seems to be an exception to the universal phenomenon and the law of gravity. Because the number of corruption cases, unemployment, crime against woman and children, misuse of power by officials and the price of essential commodities are moving upward with an increased velocity without being pulled down by any gravitational force of the government.

The hike in the price of the petroleum products is affecting the common man. In today’s era a vehicle at home is not a sign of luxury, but it is a necessary evil. Irrespective of being rich or poor it is a dream of a man to have a vehicle. When he fulfils his dream, he has to pay a certain amount of tax for purchasing the vehicle. To run the vehicle, toll has to be paid by the vehicle owner. All the more the increasing price of petroleum products has made the life of the common man miserable. The price of petrol has reached almost Rs. 100 per litre.

The State and the Central taxes make up for over 61% of the retail price of petrol and about 56% of diesel. The union government levies excise duty of Rs 32. 90 per litre on petrol and Rs 31.80 for a litre of diesel. When we fill petrol for Rs 100, we pay Rs 61 as tax to the central and the state governments.

The politicians claim that by levying high amount of tax, the life style of the poor is changed and they are secured in the society. Some politicians are of the opinion that they are constructing toilets for the poor with the tax levied from the petroleum products. Another gentleman was commenting that in his view the price of the petroleum products should go up further. When the price is high, people would think of an alternative for it and it will open up avenues for inventions. In his opinion, the price hike is an encouragement for people to have initiatives and inventions.

But, we experience that the poor becomes poorer and the breeze of development is only on the side of politicians, corporates and those who please the ruling party.

Often the politicians squander the funds for the development in vain; they sell the heritages and sources of income at the hand of the private sector for their personal benefits. A government levying high tax on an essential commodity from the citizens and making the life miserable is not a good government. It is not in the welfare of the public. It is not a governance of the people, by the people, and for the people. It is a government that tries to enslave the citizens for the benefit of a particular group.

We will be able to say that we are living in a democratic country when the government says goodbye to the white-collar robbery in the name of unnecessary tax. It is high time to interrupt the velocity of the price hike of essential commodities in the country. But the question remains, ‘who will bell the cat?