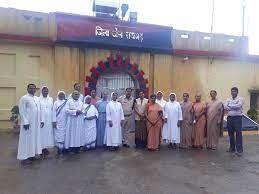 His eyes brim with tears as he says in a hushed tone, “I am grateful...will always be, to God, who is giving me a roof over my head -- a dream of mine made possible by the benevolence and initiative of the Prison Ministry. Thank you...”
Yeshwanth (name changed) had been living happily with his wife and 6 children in the house that he had built on inherited land. The property was a portion of the 7 acres that his father had cleared in the forest area, with due permission from the Tehsildar, and divided between Yeshwanth and his 2 brothers. His brothers too had constructed houses in their portion of the land.

They cultivated the land and reared animals for a living. It was not a luxurious life, but they did manage to make ends meet, and were happy. Life was going on smoothly for the 3 brothers, until a few years down the line when tribals from the neighbouring village came with the claim that the land was rightfully theirs as it fell in the tribal belt. The tribals went to the extent of destroying their crops and forcibly taking the yield from the land.

One evening as it was getting dark, Yeshwanth saw 3 tribals ploughing his land. When he confronted them, a scuffle broke out and they started throwing stones. Unfortunately, a stone that Yeshwanth threw back at them killed one of them. The next day the police accompanied by a huge crowd arrested him. He was beaten up mercilessly, despite him narrating the truth. He was thrown into jail -- the sub-jail first, then the district jail, and finally the circle jail. Fearing the tribals, nobody came to his rescue. He was sentenced to 20 years imprisonment. As he was poor, he could not hire a lawyer to fight his case. His family too was on the streets with no place to live as they had been driven out of the village.

Yeshwanth pleaded with the Jail Superintendent and managed to get free admission for his 6 children in the Jail School, and the Jail Hostel. His wife went to stay with her parents and did odd jobs on daily wages. Inside the jail, Yeshwanth too could earn up to Rs. 40 per day. The Prison Ministry of India helped with the formalities of his release and after 9 years he was released from jail.

He went back to his family and joined his wife earning meagre wages from menial jobs. The eldest son joined the Seminary four years ago. Yeshwanth and his wife, by living thriftily, managed to buy a small piece of land for Rs. 60,000. He could pay off only half the amount but is confident that very soon he will be able to pay off the rest from his earnings. With another Rs. 1,00,000 that he intends to utilise to cover the cost of construction, he is awaiting the completion of his house. It is being constructed under the auspices of the Prison Ministry and he is grateful to Rev Fr Francis Kodiyan and Sr Shanthi Pulickal HCC.

Where are Your Brethren?

This true story invites humanity to understand the injustice done to the poorest of the poor in our society. “As long as poverty, injustice and inequality persist in our world, none of us can truly rest,” acclaimed Nelson Mandela, former president of South Africa, who was convicted along with several other ANC leaders and sentenced to life in prison in June 1964. Every prisoner who weeps due to injustice done to them is a God-given gift to us.

The disciples of Jesus were victims of injustice and they were God’s gift to His only Son. And today, our brethren behind bars who are the victims of injustice are our brethren. As God asked Cain, where is your brother? In Genesis 4:9, the same God asks each one of us where are our brothers and sisters? For Prison Ministry volunteers, our brothers and sisters are behind bars and we encounter our living God in their brokenness and woundedness. Jesus too was broken on the Cross; salvation came to the world from His brokenness.

Many of the great characters from biblical stories experienced periods of imprisonment —Joseph, Samson, Jeremiah, Micaiah, Zedekiah, Daniel, John the Baptist, Peter, James, John, Silas, Paul, Epaphras, Aristarchus, Junia, and even Jesus himself, who was held in custody between his arrest and crucifixion. These biblical characters were the victims of injustice including our master and redeemer.

When Pontius Pilate stood before an enormous crowd and announced that he would let one prisoner go, the crowd had the power to choose between a robber and a redeemer. They chose the robber and killed the redeemer. The robber was released and the redeemer was killed. Jesus faced injustice. Our world, our society, humanity continues to face injustice.

Innocents of our Times

Many of our innocent prisoners live and suffer through years of imprisonment. An example from our time is that of the Kandhamal incident. The late Fr Stan Swamy SJ, Father of Adivasis, died a prisoner. Mother Mary accompanied Jesus silently on the way to Calvary and today, together with her we accompany our innocent brethren behind bars as Prison Ministry launched Innocent Prisoners Redeemers, one of the 40 Special Task Forces. As we accompany them on their Journey of Hope that they will be freed one day, we assure them that They are not alone!

The Prison Ministry, as part of its Ruby Jubilee, has assisted 400 prisoners with their release. Many of them have to take loans to get their loved ones released, pay interest for years and still they continue to be behind bars. There are so many such cases pending in our courts. Many of our brethren have no money to hire a lawyer. If we do not reach out to them on time, are we also not part of this unjust system that they face?

The Israelites cried out to God. In response, God anointed and appointed Moses. Our religious call is a response to the cry of someone that God heard, called upon us and anointed us. The call of every Prison Ministry volunteer is the same. It is a unique call, a call within a call. God called, anointed and appointed us hearing the cries from the dark prison cells across our country and their families. What a unique call it is!

At the wedding feast of Cana, when there was no wine, Mother Mary said to the disciples, “do whatever He tells you” (Jn 2:5). It is the same that the Blessed Mother tells each one of us from behind bars -- to do whatever her Son tells us as He listens to their cry having been one of them, When I was in prison, you visited me” (Mt 25:36).

We Kneel and God Lifts

As the saying goes, “When you kneel down to God, He stands up for you. And when He stands up for you no one can stand against you.” We kneel before God for the sake of all our brethren facing injustice, violence and persecution and we have witnessed our God standing for these vulnerable and broken ones. Prison Ministry India is a faith-based ministry. Joshua said unto the people, “Sanctify yourselves: for tomorrow the Lord will do wonders among you” (Joshua 3:5). We sanctify and purify ourselves for the sins of the world, to bring justice to the nations and God does wonders.