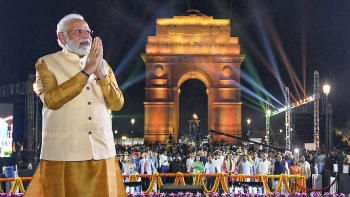 One of the exercises undertaken by the BJP, since it came to power in 2014, is changing the names of cities, roads, railway stations, etc. in order to erase all symbols of a composite culture and religious pluralism and to assert the dominance of a monoculture and Hindu majoritarianism. It is also part of the efforts to erase history and rewrite history or even manufacture history. Many names that had reference to Mughal period or Islam now stand changed. For example, Mughalsarai railway station was renamed as Pandit Deen Dayal Upadhyaya railway station in 2018.

On September 8, 2022, Prime Minister Narendra Modi inaugurated the newly-christened Kartavya Path, which stretches from Rasthtrapati Bhavan to India Gate in Delhi and unveiled a statue of Netaji Subhas Chandra Bose at India Gate. One day prior to the inauguration, a statement issued from the Prime Minister’s office stated, “It symbolizes a shift from erstwhile Rajpath being an icon of power to Kartavya Path being an example of public ownership and empowerment.”

While inaugurating the Kartavya Path, the Prime Minister said, “Kingsway i.e., Rajpath, the symbol of slavery, has become a matter of history from today and has been erased forever. Today a new history has been created in the form of ‘Kartavya Path’. I congratulate all the countrymen for their freedom from yet another identity of slavery, in this Amrit Kaal of independence.”

A good number of write ups and sarcastic tweets appeared in the media about the game of name-change. Trinamool Congress MP Mahua Moitra tweeted that the name, Raj Bhavan, is to be changed to Kartavya Bhavan, Rajdhani express into Kartavyadhani express and Raj Kachoris to Kartavya Kachoris. The term ‘Raj’ also refers to governance or rule. When the name Kingsway was changed after independence to Rajpath, it actually referred to rule by the people of India or India being transformed into a democracy in which the rulers are accountable to the people of India.

It is pertinent to quote what The Indian Express editorial wrote on the issue. The “colonial hangover” in a nation that is mostly young, embracing new technologies and facing the world more confidently, and finding its stride in the digital age, is a fading spectre better left to die on its own. It doesn’t need a monument built to commemorate its passing.

“During the last seventy-five years we spoke only about our rights and fought for our rights. Completely forgetting about the duties has made India weak,” he lamented. He appealed to all, “We have to light a lamp in the hearts of every Indian citizen, the lamp of duties. All of us together will make the nation progress on the path of duties so that the evils prevalent in the society will go away and the nation will touch new hights.”

On January 26, while speaking from the Red Fort, the Prime Minister appealed to the people to take Five Resolutions to make the developing India into a developed nation.  The fifth resolution is related to the duties of citizens. He also said that the Prime Minister and the Chief Ministers are not out of this responsibility.

A Public Interest Litigation is filed in the Supreme Court, praying the Court to make the fundamental duties justiciable. The PIL states that without fulfilling the duties the dream of an ideal nation cannot be realized. The PIL seems to have been filed by a person who shares the ideology of the BJP and the RSS.

Addressing the 28th foundation day programme of the National Human Rights Commission (NHRC) in 2021, the Prime Minister said some people see human rights violation in some incidents and not in others. He also said, “Selective behaviour is harmful to democracy” and that some people “try to dent the country’s image in the name of human rights”. In fact, the selective behaviour was shown by the BJP leaders by their silence and inaction, when innocent Muslims were lynched by the Hindutva mobs.

It was very unfortunate that Chairperson of NHRC, Retired Justice Arun Mishra, instead of encouraging and supporting human rights activists and organizations, used the occasion to cast aspersions on them and endorse the view of the Prime Minister. “India is one of the strongest democratic forces today and that credit goes to the citizens and leadership…It is now a norm to accuse India of human rights violation at the behest of international forces,” said Justice Arun Mishra. The NHRC was created by the Parliament as an independent body to safeguard human rights from the aggression by the governments. It seems Justice Arun Mishra is not aware of the very purpose of NHRC.

Ever since the BJP came to power at the centre in 2014, there has been consistent repression of human rights activists and organizations working for the protection of human rights of the deprived sections of the society.  The sixteen activists, writers and academics who were implicated in the Bhima Koregoan case and were arrested under the draconian Unlawful Activities Prevention Act (UAPA) are advocates of human rights. Thirteen of them are still incarcerated in the overcrowded and unhygienic Indian prisons. Fr. Stan Swamy died as an undertrial prisoner. Varavara Rao is on bail on health grounds and Dr. Sudha Bharadwaj also got bail in February 2022.

All the sixteen are staunch critics of the violation of human rights by the state and non-state actors. They relentlessly supported the rights of workers, tribals and other deprived sections of society. Since many of them worked in the Maoist infested areas for the protection of the rights of Adivasis, it was easy for the government to accuse them of joining hands with the Maoists. All those who speak about Human Rights and work for protecting human rights are nicknamed as ‘Tukda Tukda Gang’ by the Hindutva organizations.

They have reiterated that they have nothing to do with the Bhima Koregoan violence and they are falsely accused. Some of them, including Vernon Gonsalves, are accused of a plot to kill Prime Minister Narendra Modi. Regarding this strange accusation Gonsalves has written, “The sole purpose seems to be to whip up a false narrative, favourable to the current regime. Side-tracking the demands of Dalit movements to punish the Hindutva leaders and the organizations responsible for the attacks of first January 2018 on the congregation of at Bhima Koregaon can be another probable purpose.”

It was reported in the media that a US-based firm Arsenal Consulting examined the hard disks of the computers of the two accused, Rona Wilson and Surendra Gadling. Its reports revealed that letters were planted in their computers using highly sophisticated malware and surveillance techniques by a third party. Hence the evidence purported to justify their arrest is highly suspicious.

NGOs working for the promotion and protection of human rights have been targeted by the Modi government. Amnesty International is one among them. It was compelled to close down its activities in India because its bank accounts had been frozen and it had been forced to lay off staff in India and suspend its campaign and research work.

A report by Ashoka University’s Centre for Social Impact and Philanthropy (CSIP), in 2019, said that the Union Government cancelled 10,069 FCRA registrations in 2015 and another 4,943 in 2017, majority of which were NGOs. Choking funds to NGOs is an effective method used by the government to paralyze them. One of the main objectives of the Amendment of Foreign Contribution Regulation Act 2020 appears to be blocking funds to NGOs working for the promotion of human rights and environmental protection.

Whatever the BJP government under the leadership of Narendra Modi does has a goal from the perspective of transforming India into a Hindu Rashtra. The BJP government doesn’t want anyone to question its policies and actions, but only obey what is told to people. When the rights of people are emphasized, they will be questioning the government because it is mainly the responsibility of the government to facilitate the actualization of the fundamental rights of citizens guaranteed in the Indian Constitution.

On the contrary, he has adopted one-way communication of speaking and advising people through his monthly Mann Ki Baat. Many vital bills are passed in the Parliament without any discussion, reducing the Parliament into a rubber stamp. Media is converted into a propaganda machinery of the government by adopting a carrot and stick policy.

The Prime Minister’s overemphasis on duties to the exclusion of rights appears to be a strategy to brainwash people with high doses of nationalism and to brand advocates of human rights as anti-nationals. Rechristening Rajpath as Kartavya Path seems to be a symbol of the gradual eclipse of people’s rights.