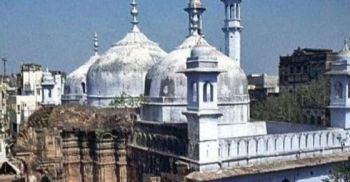 Raking up Gyanvapi Mosque Issue : Marching Towards Past

The District Court in Varanasi has directed Archeological Survey of India to conduct a study of Gyanvapi Mosque. As per ‘Places of Worship Act’ (Special Provisions) 1991 all the places of worship have to maintain status quo as it was at the time of Independence. There is news that Supreme Court is willing to have a relook at this Act.

As the criminal act of demolition of Babri mosque was going on, the chant was ‘Ye to keval Jhanki hai, Kashi Mathura baki hai’ (This is just the beginning, Kashi and Mathura next). As the Babri mosque issue dragged on for long time, it was accompanied by Rath Yatras and other campaigns which not only led to violence, hatred for minorities and a polarization which is creating wide gulf among the religious communities in the country.

Though it was claimed that Lord Ram’s birth place temple was destroyed by Babar to build the mosque, nothing was proved, about the temple being there or Lord Ram having been born there. In case of Gyanvapi Mosque (Banaras) the evidence of temple being razed to build the mosque is very much there. So, what is the need for ASI study pertaining to that now? The major propaganda after ‘Babar ki Aulad jao Pakistan ya kabristan’ (Sons of Babar go to Pakistan or graveyard) which accompanied the campaign for Lord Ram temple, now the major targeting is Aurangzeb. He is being labeled as a cruel, anti-Hindu king, who destroyed the temples and spread Islam by force. The idea is to derive political mileage for majoritarian politics. As we see Aurangzeb and his destruction of the temple here, we forget that it was right in nearby place where the greatest Shehanai player Ustad Bismillah Khan played his immortal music devoted to Hindu Gods!

All kings were not similar. Neither were all Hindu kings the epitome of virtues nor all Muslim kings devils as projected by the present popular historiography. Among Muslim kings there were the likes of Akbar who initiated a religious harmony project through Sulh-e-Kul and also tried to pick up the best from different religions through Deen-E-Elahi. Aurangzeb’s brother Dara Shukoh, who lost out in the battle for power, was a scholar of Sanskrit and got Upanishads translated into Persian. His Majma-Ul Bahrain compares India to the vast ocean which came into being due to confluence of two great seas, Hinduism and Islam.

Aurangzeb was more orthodox and closer to the Ulamas. Still, it was not his policy to destroy Hindu temples without any rhyme or reason. His Banaras firmans, issued to Brahmans of Banaras, Vrindavan point out that old temples can be repaired (Satish Chandra, Medieval India, Har Anand, 2017, Page 277). His policy was also aimed at no new temples should come up. Some of the temples were destroyed as well. Apart from political motive of humiliating the rival king sometimes they were razed for some anti-state, subversive or immoral activities going on there.

Demolition of Kashi Vishwanath in 1669 and Mathura’s Keshav Dev Temple (1670) were due to the perception that politically subversive activities were being propagated from these temples. This was in the wake of rising political opposition to Aurangzeb’s rule from Jats, Marathas in particular. These destructions were a sort of punishment and a warning, motivated by political reasons of power. Hence, Aurangzeb issued orders for destruction of such temples where these activities were going on.

Massir-i-Alamghiri by Saki Mustaid Khan is a chronicle of Aurangzeb’s life. The writer though writing from Islamic perspective describes the Vishwanath temple demolition as a rare and impossible event. There is no firman of general destruction of temples by Aurangzeb.

At the same time, there are firmans of his giving grants to Hindu temples, Brahmans and Marathas. Guru Ramdas Temple in Dehradun and Vaishnav Temple in Vrindavan, being a few such. His donations to Nath Panthi Jogis in Sarkar Nagaur, grant of 100 pakka bighas of land to Panth Bharati in Pargana Siwana in Rajasthan are well recorded. The other famous temple to have received grant from Aurangzeb was Mahakall temple in Ujjain.

There are also firmans from him asking his officials not to have unwanted interference in matters of temples. His grant to Umanand temple in Assam and donation of land to Bhagwant Gossain, a Hindu ascetic, are a matter of historical record. In Chitrakoot, he donated a sizeable land to Mahant Balak Das Nirvani to support Balaji temple. In Varanasi, Jangambadi is a place where Shaivites live. The place was patronized by Mughal kings and Aurangzeb continued the tradition.

Of tens of thousands of Hindu/Jain temples, it may be only 10-15 temples which were destroyed as per the Archeologist Richard Eaton. While Kings had their own logic of running the empire and taking along the subjects, while extracting tribute of course, there were differences. Of all the Mughal kings, surely Aurangzeb was more orthodox. In addition, his actions have been seen through the lens of communal historiography. There were multiple reasons for donations and patronage to temples and also for destroying some of them. Aurangzeb not only ruled for nearly 49 years but he lorded over the largest empire among all the Muslim kings.

The communal politics has reaped rich benefits by raking up Ayodhya, and Kashi seems to be next in line. How far can we keep picking up history as a tool to divide the society? Interestingly while the ground was being leveled for Lord Ram’s Temple in Ayodhya, the relics of past surfaced. It was claimed that they were Shivlings, but on closer scrutiny they turned out to be Buddhist relics with carvings like that of Ajanta and Ellora. Patrick Carnegi, the British archeologist, points out that the Kasauti pillars used in Babri Mosque resemble the Buddhist pillars discovered in Varanasi and other places.

Raking up the past, which has hundred diverse interpretations, cannot take us further. Many Buddhist Vihars were also razed. We have to set our priorities. We need to define our holy places. Are they going to be from the hazy past or are they going to be our educational, health institutions? Are we going to harp around our constructed sectarian identity or are we to fulfill our material needs as Indians? There is a need to take the 1991 Act more seriously and forget rekindling of places of worship issue.