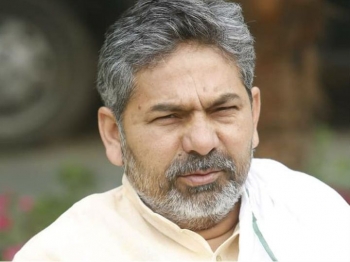 Ready for a long haul: Tikait

Braving biting cold and rains, agitating farmers continue to camp on the borders of Delhi. They seem to be in no mood to withdraw the protest unless the government repeals the three controversial agricultural laws. After several rounds of talks with the government, which failed to deliver any result, farmers have begun holding round table discussions among themselves to revise their strategy on daily basis.

Anju Grover for Indian Currents spoke to farmer-leader Rakesh Tikait to know the plight of farmers, suicides that took place at the protest sites, and roadmap of their struggle. Mr. Tikait maintained that it was people's movement as no political party has been allowed to lead from the front. He said it was a peaceful agitation and vowed to keep protesting till farm laws are withdrawn. He alleged that the government was favouring traders and not bothered about farmers, labourers and consumers. "Farmers have a lot of patience and are prepared for a much longer agitation," he said.

Q: What is your assessment of the government's stand on the farming laws as several rounds of talks have failed to yield any result?
A: My assessment is that the government is in no mood to repeal these laws. Farmers too are adamant on their demand for withdrawal of these laws. Guarantee on Minimum Support Price (MSP) is another demand on which a law has to be made. Implementation of Swaminathan report is the third major demand. The government wants to talk about amendments and hold discussion clause-wise, but that is not acceptable to us. These discussions have not helped. The government does not want to discuss repeal of law and we do not want to discuss clause after clause. It is a wait and watch situation.

Q: What is your plan of action if there is no breakthrough in the next few days?
A: We will depute young farmer leaders to go to the villages and apprise them of the talks and their outcome.

Q: Protesting farmers are facing hardship. Cold weather conditions and rains have made things difficult for them.
A: You are right. Farmers are facing a lot of hardships, but they are firm. For them, it is a do or die situation. Farmers know that if they return home without getting their due, they will never be able to prosper in their life. Farmers will not budge from the protesting sites. For them, these issues are close to their heart and hence they have decided to firmly fight for their right regardless of the outcome. It will be better for the government to resolve the issue at the earliest.

Q: More than 40 farmers have committed suicide or lost their lives during the protest. Your comment.
A: The government has compelled them to take this extreme step. They are martyrs. Therefore, the government should understand farmers' conviction for the cause.

Q: Supporters of the ruling party have raised suspicion over the nature of farmers' movement stating that Opposition parties have extended their support to this movement.
A: It is not true. It is people's movement based on ideological issues. It needs to be tackled ideologically and not at gun point. Had Opposition parties offered support, the government would have condemned them. Sentiments of the public have given strength to this movement which is based on issues. When agricultural produces were selling at half price, farmers took to roads and that's how the movement started.

Q: What are the lessons you have learnt from the famous 1988 stir in which your father Mahendra Singh Tikait's campaign at Boat Club secured waiver of power and water bills and higher price for sugarcane etc.
A: The 1988 protest was peaceful; so is this movement. That had happened in Delhi's Boat Club while farmers are protesting at the borders of Delhi this time. This movement has spread to 200 kilometres (approximately). Farmers are protesting in different parts of the country as well.

Q: Why are women protestors not visible in the movement?
A: Women protesters come and go back home due to unavailability of clean toilets and bathing spaces.

Q: Twenty-seven years ago, Mahendra Singh Tikait and other leaders had met then Prime Minister Narasimha Rao and asked for permission to sell their products anywhere in the country.
A: We are not opposed to farm reforms. We have demanded a legal guarantee for MSP; Only farmers from Punjab and Haryana are able to get the rate at MSP for their produce. Farmers are demanding repeal of three new agricultural laws. These laws will benefit the corporate, but not the farmers.

Q: How optimistic are you about the outcome of farmers' movement?
A: We do not know for how long this movement will go on. But farmers are determined for a long haul till they get their due.

Q: Some on social media have criticized the "lavish" aid being provided to farmers. Photos of ‘Pizza langars’, proper beds, heating pads for farmers have gone viral.
A: It is wrong to project farmers in poor light. There is nothing wrong if someone has donated a dress to any farmer. Farmers regularly eat food at home. Is it luxury? If some villagers have sent blankets for them, what is wrong in it?  It is a reflection of petty mind-set of people who are portraying poor farmers in such way. Moreover, people are sending donations to farmers at the protest sites and not at home. It is a battle of farmers, labourers and consumers.