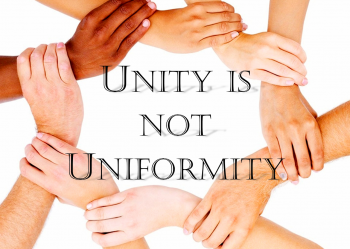 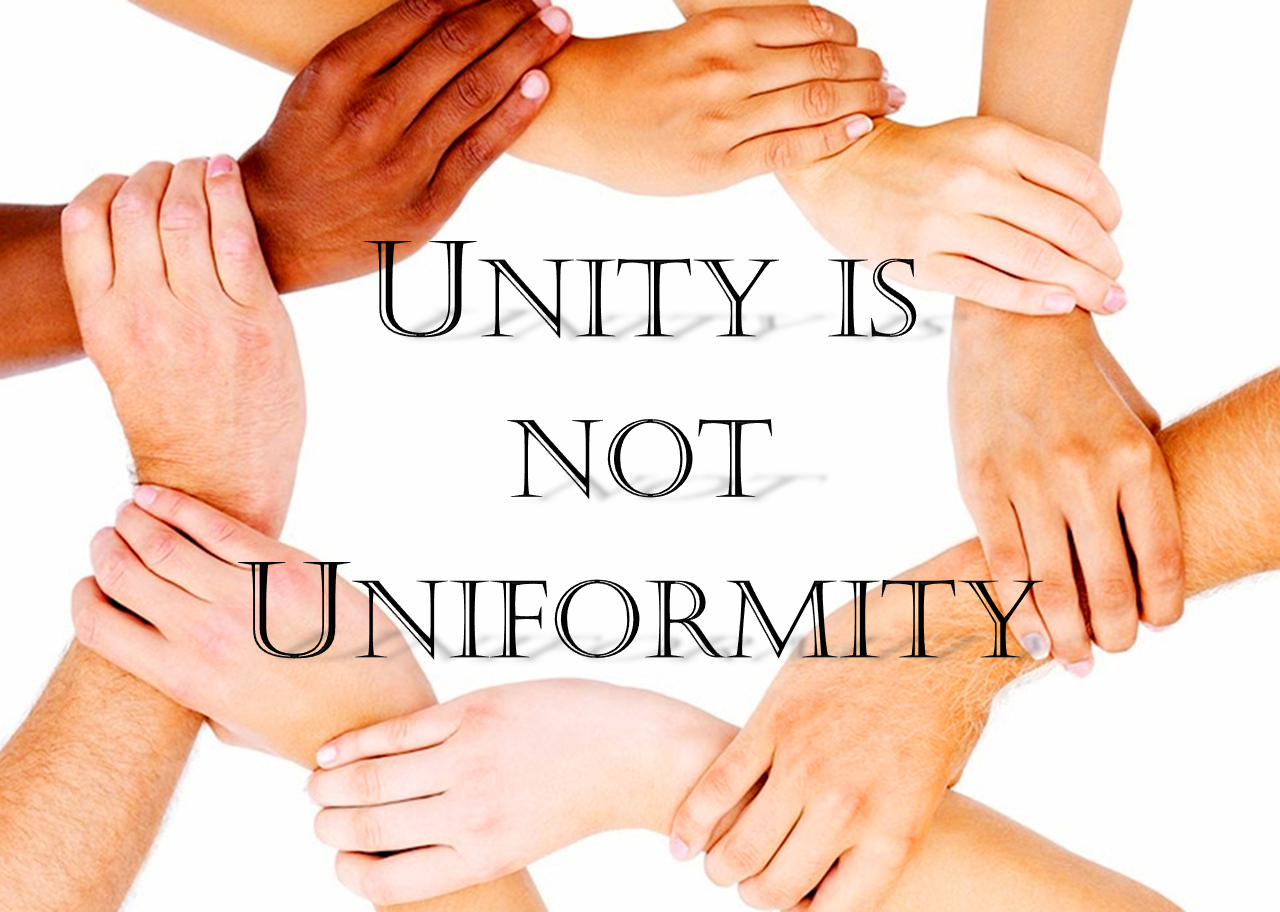 History is a witness to the conflicts and divisions in religions, movements and organizations because of imposition of uniformity by those who were in authority. Innumerable are the stories of disputes and divisions leading to fights and wars because of the obsession with uniformity. Diversity is the law of nature. Look at nature; how diverse is the creation with millions of species of flora and fauna. Each human being is unique and different from the other. There are more than 790 core people in the world; still no one is exactly the replica of the other. Imposition of uniformity arises from pride, arrogance, and the assumption that I am only the right, mine is the only truth and all should accept my truth. Imposing uniformity is nothing but a rebellion against God.

All fundamentalist organizations are bent upon imposing uniformity on people. What the Taliban did in Afghanistan while it was in power from 1996 to 2001 and what it is doing now after recapturing power is the cruel game of imposing its dictates with regard to dress, food, job etc, on the people of Afghanistan at the point of gun. In this process they are indulging in blatant violation of human rights. In the name of Islam the terrorist like Taliban, ISIS and Al Qaeda are killing the soul of Islam. The Arabic root word ‘Islam’ means submission, obedience, peace and purity. All those who impose uniformity on people who are not willing to accept a uniform lifestyle or belief system have the attitude of the Taliban and ‘Talibanism’ is inherent in them. Uniformity kills the spirituality of any religion because spirituality accepts, appreciates and promotes diversity.

Unity refers to the union or harmony among groups of people belonging to different religions, races, languages, cultures etc. Unity happens when people from different ethnic backgrounds, religious beliefs, political philosophies, etc. are able to coexist peacefully and respectfully. Unity starts with tolerance and goes beyond tolerance to accepting, appreciating and celebrating differences. Unity is a constant effort to treat each other with respect and appreciation of each other’s differences. Leaders with an inclusive vision and spirituality promote unity amidst diversity and they do not impose uniformity on people.

Uniformity is the state of being uniform; holding the same views, beliefs, standards, ethics, etc. Uniformity doesn’t tolerate differences. It demands everyone look alike, think alike and speak alike. Uniformity looks impressive and it is easier to manage, but it does not create unity. Those who are in authority often prefer uniformity because it helps them to control those who are under them. Instead of tolerating and accepting differences, uniformity tries to eliminate differences and create an environment of sameness. Uniformity seeks to create “harmony” by silencing all dissenting thoughts, opinions, and beliefs.

The solution to ‘Unity versus Uniformity’ is Unity in Diversity. It refers to unity without “uniformity and diversity without fragmentation”. The heritage of India for thousands of years has been unity in diversity. The Rig Vedic saying, “Ekam sat vipra bahudha vandanti” (Truth is one, the wise perceive it differently or God is one, the enlightened or the wise call him by different names.) has been the foundation of unity in India despite the existence of all major religions in India. The concept of unity in diversity has not been limited to religion alone but to all other dimensions of social, political and cultural life of the people of India.

The Constitution of India, especially its preamble, has captured the ancient wisdom of India and articulated very clearly that the basis of the unity of India is pluralism or secularism. It means that the state does not discriminate among its citizens on the basis of religion and all citizens have equal rights and opportunities irrespective of their religion, caste, ethnicity, culture and language. The government will not favour and disfavour any particular religion. It is an assurance that the religion of the majority will not be imposed on others and the government will not favour the religion of the majority.

Ever since the BJP came to power at the Centre in 2014 under the leadership of Narendra Modi, India has been witnessing erosion in the practice of the concept of ‘Unity in Diversity’. There have been various attempts to impose Hindutva, a majoritarian ideology, on all Indians, especially, the minorities. The enactment of anti-cow slaughter laws and amendments to anti-cow slaughter laws to make them stringent are examples for imposing the majoritarian belief on all Indians. The enactment of Citizenship Amendment Act (CAA) is an assault on the pluralism of India, as it discriminates against the people belonging to Islam. Imposition of majoritarian ideology on all Indians has created rifts in Indian society. Instead of strengthening unity, it has only created suspicion and trust deficit among different sections of Indian society. “Sab ka saat sab ka vikas aur vishwas” has remained only as a slogan and the reality has been just the opposite. Using religion to polarize people has been the strategy of the BJP.

In the same way, there has been a concerted effort on the part of the Central government to grab the powers of the states. For example, the Government of National Capital Territory (GNCT) of Delhi (Amendment) Act, 2021 severely restricts the powers of the elected Delhi government. It states that the government in the National Capital Territory of Delhi meant the Lieutenant-Governor, who is an appointee of the Central government. It gives discretionary powers to the L-G even in matters where the Legislative Assembly of Delhi is empowered to make laws. It bars the Assembly or its committees from making rules to take up matters concerning day to day administration, or to conduct inquiries in relation to administrative decisions. In fact the amendments have taken away the powers from an elected government and given to L-G, an appointee of the Central government.

What the Sangh Parivar and the BJP under the leadership of Narendra Modi have been doing in India is imposing uniformity on the diverse people of India. The recent decision of UP Chief Minister Yogi Adiyanath to ban sale of meat and fish in Mathura is an imposition of uniformity based on the belief of some individuals. The farmers association have been protesting for more than one year on the imposition of uniform farm laws on them. Agriculture is a state subject and the central government formulated laws without proper consultation with the states as well as the farmers who are the main stakeholders and imposed the laws on them in spite of their opposition. The nation has lost millions of rupees in financial terms because of the stubbornness of the Central government.

If our political and religious leaders had imbibed the spirit of Mahatma Gandhi, the father of our nation who was votary of pluralism, people of India would have been saved from many communal riots, mob lynching and other man made calamities. Gandhiji believed that “our ability to reach unity in diversity will be the beauty and the test of our civilization.”

Pope Francis on many occasions emphasized the need for appreciating and respecting diversity. While addressing a gathering during his visit to Japan between November 23 and 26, 2019, Pope Francis said, “How much our human family needs to learn to live together in harmony and peace, without all of us having to be the same. We are not mass-produced on the assembly line. We need to grow in fraternity, in concern for others and respect for different experiences and points of view.”

During the visit of Pope Francis to Thailand in 2019 in his first official speech, he encouraged the Thai authorities and civil society to strive for unity, while preserving diversity which gives their country its “soul”. "Yet the experience of a unity that respects and makes room for diversity serves as an inspiration and incentive for all those concerned about the kind of world we wish to leave to our children", he said. Pope Francis has emphasized again and again that respecting diversity is the soul of unity.

While addressing a large gathering at the Vatican on October 9, 2013 Pope Francis said, "We are not all the same and we shouldn't all be the same". Each person has his or her own gifts, qualities and character, which "is one of the beauties of the church -- everyone brings what God has given him or her to enrich the others." "When we try to impose uniformity, we kill the gifts of the Holy Spirit," the pope said.

When political and religious leaders fail to respect diversity and impose uniformity, they are sowing the seeds of division and disunity. The essence of all religions is spirituality and not rituals and rules; they can only be the means for growth in spirituality, provided the followers are given the freedom to choose the means. A quote of B R Ambedkar is very pertinent in this context. “Religion must mainly be a matter of principles only. It cannot be a matter of rules. The moment it degenerates into rules it ceases to be a religion, as it kills responsibility which is an essence of the true religious act”.