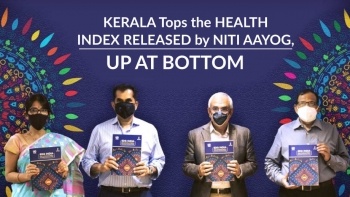 In 2017, Yogi Adityanath remarked that Kerala should learn from Uttar Pradesh what health care is all about. And, from then onwards, for the past four years, Kerala tops the annual Health Index, released by none other than the NITI Aayog itself. The woman behind this honour, Ms Shailaja teacher, the then State Health Minister, deserves a major share for these awards.

Kerala’s success story is not just limited to the governance, but to people’s awareness. What surprises many is that Delhi is amongst the worst performers in the Union Territories’ category, despite their claims to have reformed the Education and the Health sectors.

The health index is a weighted composite index based on select indicators in three domains namely the health outcomes, governance and information (quality of data collected and healthcare sector efficiency); and key inputs and processes (health infrastructure and human resources).

Kerala, Tamil Nadu, Telangana, Andhra Pradesh and Maharashtra have topped the NITI Aayog’s 2019-20 health index among larger states while Uttar Pradesh is the worst performer and stood at the bottom of the index with Uttarakhand, Rajasthan, Madhya Pradesh and Bihar being other four laggard states at the bottom.

The report has been prepared by NITI Aayog in collaboration with the Ministry of Health and Family Welfare and the World Bank. “From the base year (2018-19) to the reference year (2019-20), Uttar Pradesh led in improving the performance of 33 out of 43 indicators and sub-indicators. On the other hand, Kerala showed improvement in only 19 indicators, and additionally had three indicators in the category of fully achieved,” the Aayog said.

In his Facebook post, Shashi Tharoor, MP stated that Kerala is witnessing good governance and the state government is inclusive of all politics. Tharoor lauded Kerala for coming first in the Niti Aayog's health survey. Meanwhile, Tharoor also tagged UP Chief Minister Yogi Adityanath in the post after UP ranked last in the same report.

Further, Tharoor also tweeted a 2017 news with Yogi’s remark that Kerala should learn from UP about what health care is. “If the likes of Yogi Adityanath would learn not just health practices but good governance and inclusive politics from Kerala, the country would benefit. Instead, they keep trying to drag the country down to their level!” Tharoor Tweeted.

In 2018-2019, Kerala had a score of 81.6, and in the reference year of 82.2, an improvement of 0.6 points. On the other hand, UP at the 19th position among the larger states, which has been at the bottom of the ranking, jumped from 25.06 in the base year to 30.57 depicting an incremental rise in the reference year. Despite this fact, all the ‘larger’ states also reported a shortage of specialists at district hospitals.

The president of the Public Health Foundation of India, K. Srinath Reddy, said, “For a state like Kerala, which has already achieved a lot in maternal and child health indicators, there is not as much scope to improve as it is in improving on the front of non-communicable diseases. For states like Uttar Pradesh, the challenge still is to improve maternal and child health indicators.”

The availability of functional First Referral Units (FRUs) was 100% or more in five ‘larger’ states – Karnataka, Kerala, Punjab, Tamil Nadu and Telangana. According to the report, “A functional FRU is essential to provide specialised services close to the community and can help in improving access and decongesting the patient load at higher level facilities.” Bihar continued to have the lowest availability of functional FRUs – 15.4% in the base year and 16% in the reference year.

In addition, the number of states with universal birth registration came down from four in the base year to three in the reference: Assam, Telangana and Uttarakhand; Kerala slipped from 100% to 98.2% in this period.

Kerala Chief Minister Pinarayi Vijayan said that the state's health performance was the best in the country because of policies aimed at improving the public health system. Vijayan wrote on Twitter, "In @NITIAayog's HealthIndex, Kerala has once again emerged as the best-performing major state. The policy that focuses on developing the public health system, as well as the dedication of our health personnel to assure its success, are the main reasons for this achievement."

The recent spurt in Covid cases in Kerala is reported to be due to extra cautiousness and multiple testing. As per the Govt order, the person reported Covid positive is not supposed to undergo RTPCR test for the next three months, owing to the self-developed antibodies. But the health workers and village officers in Kerala made it a point not to allow anyone on the roads, without an RTPCR Negative report. Some fear, in the absence of Govt free testing, the private labs are doing a good business, charging over Rs 500 per RTPCR test.