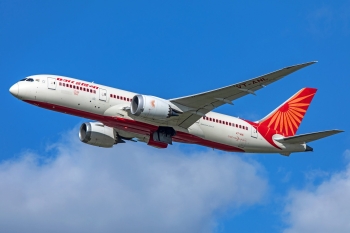 The uncouth manner in which a 34-year-old inebriated “business class” passenger urinated on an elderly fellow passenger in the mid-air on New York-Delhi Air India flight last November 26 is horrendous.

In brief, reportedly, when the lights were turned off in the aircraft after lunch, the drunken man walked over to the victim’s seat and urinated on her and stayed there until one of his fellow passengers urged him to leave. More disconcerting is that despite her complaining, the airline crew failed to act. She was allegedly made to sit in the soiled seat and even though some first-class seats were said to be vacant, it was not offered to her. To cut the story short, after standing for 20 minutes, the victim was offered a small seat used by airline staff where she sat for about two hours. She was then asked to return to her own seat but when she refused, the victim was offered the steward's seat for the rest of the journey. Even more shameful is that the man who urinated was allowed to go scot-free on landing.

It took about a month for the airline to act on the woman’s complaint. Air India  has banned the accused person from its flights for unruly behaviour for 30 days — the maximum period for which a passenger can be punished by an airline unilaterally.

In the meanwhile, no sooner the incident made headlines in the first week of January this year and thankfully the man has since been apprehended, with his services terminated by the US-based employer, he is in jail.

Chairman, Tata Sons, the parent company of Air India, issued a statement regretting that the response of the airline should have been much swifter. The CEO and Managing Director of Air India also issued a statement that four cabin crew and one pilot have been issued show cause notices and de-rostered pending investigation. Apart from internal investigations that have been ordered to find out whether there were lapses by other staff, the policy on serving of alcohol in flight is also being reviewed.

The Directorate General of Civil Aviation (DGCA), responsible for regulation of air transport services to/from/within India and for enforcement of civil air regulations, air safety and airworthiness standards, has since issued a show-cause notice to Air India after it failed to comply with the provisions related to handling of unruly passengers.

The cause for concern is that Air India ought to have acted on its own, in line with the extant Government guidelines, as unruly behaviour on-board aircraft has been declared as an offence and is a punishable act. Apart from the above said incident on Air India’s New York–Delhi flight, there have been two  instances on its Paris-Delhi flight in December last year. It is not known if any action had been initiated on a drunk passenger who urinated on the blanket of woman co-passenger and another inebriated man caught smoking at the lavatory.

As a preventive measure, according to DGCA guidelines, it is incumbent upon airline staff monitor passengers who are likely to be unruly and they should be not allowed to board the flight if deemed to pose a threat to the safety and security of the flight, fellow passengers or staff while on board aircraft.

Airlines are required to establish mechanism to detect and report unruly passenger behaviour at check-in, in the lounges, at the boarding gate or any other place in the terminal building in order to prevent such passengers from boarding.

In case of occurrence of an act of unruly behaviour while the aircraft is on ground, such cases shall be reported immediately in writing and First Information Report  must be lodged with security agency at the aerodrome.

The crew members must attempt to defuse a critical situation until it becomes clear that there is no way to resolve it through verbal communication and written notice to passenger. Applying restraining devices should be used when all conciliatory approaches have been exhausted.

World over, unruly passengers pose challenges to airline crew. Extremely unruly passengers or crew members who need to be restrained are controlled using a variety of methods. Some airlines are said to  carry flex cuffs while others use seatbelts, adhesive tape, neckties, shoe laces, waist belts, or whatever is available on the aircraft.

Last year, in the US, unruly passenger behaviour reached new heights, where in one incident, a passenger punched a Southwest flight attendant and knocked out two of their teeth. Another passenger who punched and groped the cabin crew of Frontier Airlines was taped to his seat till the rest of the journey.

Notably, disruptive passengers had used sexist, racist and/or homophobic language, according to 61 percent, while 17 percent said they had been victim of a physical attack.

The Federal Aviation Authority in the US had nearly 6000 complaints of unruly passengers in 2021. In 1,113 cases, investigations were initiated and 350 enforcement actions ordered and the FAA proposed USD 5 million in fines against unruly passengers.

Similarly in 2022, there were 2,359 reports of unruly passengers, 823 investigations were initiated and 553 enforcement action cases ordered.

Why do some passengers resort to unruly behaviour? No easy answers. But some studies seem to suggest that alcohol is a contributing factor. Passengers drink at the airport and board the plane and by the time the cabin crew realize how inebriated such passengers are, it’s too late.

Unruly behaviour could be the result of an event of unsatisfactory service/condition or effect of a series of such events that build up.

A crackdown on unruly behaviour with a zero-tolerance policy can help rein in unruly passengers. New rules are not required but the existing ones ought to be enforced in the right earnest -- be it a VVIP, business class or an economy class passenger. Above all, the flight crew need to be trained and re-trained to be  proactive in managing such sensitive and traumatic situations in the mid-air.