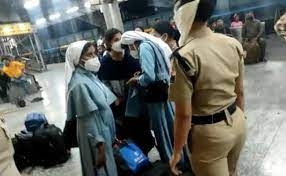 The Harassment of two nuns of Sacred Heart Congregation and two postulants who accompanied the nuns by the Hindutva hooligans with the support and connivance of UP police and the Railway police got wide media publicity in comparison with such incidents in the past. Since the incident took place against the backdrop of elections to five state assemblies, all political parties in Kerala tried to exploit it. Union Home Minister Amit Shah assured the Christian community that action would be taken against the attackers of the nuns in the train. At the same time, Union Railway Minister Piyush Goyal said that no attack took place on the nuns. He had also dismissed the allegations that the accused were student activists associated with the Sangh Parivar, saying, “That is absolutely wrong.”

According to a news report published in The Indian Express on 27th March, the fact finding team of ABVB came to the conclusion that it was an “entirely appropriate step by its activists to alert Railways in the light of “rising incidents of sexual abuses and conversions by the system of missionaries”.  The arrest of two persons in connection with the harassment of nuns appears to be eyewash.  Nothing is heard about the case filed against them. No action has been taken against the GRP officers who forced the two nuns and two postulants off the train and detained them for four hours at Jhansi junction on March 19.

I happened to read two articles on this incident: one by Rajmohan Gandhi under the title, “What to make of Amit Shah’s Warning after Nun’s Harassment” and another by retired Supreme Court Justice,  Markandey Katju under the title, “Indians Should Learn from Catholic Nuns” besides the articles published in Indian Currents in its March 29 issue. I also read the editorial on the same issue in The Indian Express on 25th March, 2021.

The Indian Express in its editorial, ‘Freedom Derailed’ wrote, “The harassment of four women, including two nuns, in a train passing through Uttar Pradesh is confirmation, if any were needed, that the political weaponization of religion has licensed an alarming bigotry in social life. But it also reveals that institutions — in this case, the railways as well as the Uttar Pradesh police — are guilty of abjectly surrendering to vigilante groups, when they should be upholding the law”.

Retired SC Justice, Markandey Katju, based on his own experience, has narrated how the nuns are harassed by the officers of different government departments and political leaders. In fact, they are the greatest beneficiaries of the English medium schools run by the nuns in different parts of India.

Rajmohan Gandhi in his write up has pointed out the danger of misusing the anti-conversion laws both by the state and non-state agencies. He has asked whether these laws are really addressing the pressing problems of the country.  He has also asked why did the “ABVP members returning from a training camp turn their minds not to Covid, not to India's hungry, jobless, neglected, or oppressed, but to alleged designs to make Christians or Muslims out of supposedly gullible young Hindus”. It is because the young people are brainwashed by the Sangh Parivar Organizations.

The harassment of the nuns was widely condemned by many opposition political leaders and civil society organizations. But no one from the Sangh Parivar expressed regret for this tragic incident. Home Minister Amit Shah did not have the courtesy to express regret. What was the need for the drama of submitting a memorandum to Amit Shah with a request to take action against the miscreants and Mr. Shah making a statement? Amit Shah should have condemned the incident, and should have made a suo motu declaration that the culprits would be caught and punished, and action would be taken against the concerned Railway and UP police personnel. On the one hand the BJP is after the Christian votes in Kerala; on the other hand it has no regret for the atrocities committed on the Christian community. This is nothing but hypocrisy.

I happened to read a letter written by Ajit Sahi on his facebook page. He is an alumnus of St. Joseph’s Boys School, Allahabad which is going to complete 140 years of its existence within the next three years. According to the author of the letter, tens of thousands of students have studied in one of the best schools in India and most of them are Hindus belonging to high castes. He says that a good number of his contemporaries are professionals like doctors, engineers, judges, eminent lawyers and university professors.  Some are also in the high ranking posts in the bureaucracy, army, navy and air force. “Today after forty years, the majority of those who studied with me are roaming around as the devotees of Modi and abusing Muslims and Christians,” he wrote. This letter vindicates the attitude of the alumni of many Christian educational institutions.

Lakhs of students pass out every year from the almost 54,000 educational institutions run by the Catholic Church in India. According to the CBCI website of the Education Commission, more than five core students are studying in the Catholic educational institutions.  If ten percent of these students pass out of these institutions in a year, the total number of students passing out every year is about fifty lakhs. How many of these students (alumni) are ready to write a letter or make  a statement condemning the atrocities on the Christians, especially priests and nuns, and express their solidarity with the victims of attack by the right wing forces? When Professor Pratap Bhanu Mehata was forced to resign from Ashoka University 150 intellectuals from the renowned academic institutions wrote an open letter denouncing the act of the university authorities and expressing solidarity with Prof. Mehta. Why are such actions not coming forth from the alumni of the Christian/Catholic educational institutions?

There could be something substantially wrong with the approach of these institutions. How many of the Christian educational institutions have an effective system to accompany the alumni? Are the Church-run educational institutions effective in instilling in the students the core Christian values and the values of the Indian constitution: pluralism (secularism) justice, liberty, equality, fraternity, respect for individual dignity and scientific temper?  If the students have imbibed these values from these institutions, at least a small percentage, say one to five percent, would have responded and protested against the atrocities committed on the Christians, especially the priests and nuns who are involved in education?

India has an army of unemployed youth and the right wing organizations are making use of them for achieving their ultimate goal of establishing a Hindutva Rashtra. It is very unfortunate to observe that a large number of educated youth who are working in the private sector as well as in the bureaucracy are also brainwashed by the right wing organizations. They have become so blind that they support any policy or action of the BJP governments without applying critical thinking. A large section of the educated and well placed young people, who are supposed to be liberal in their thinking and  are expected to safeguard the liberal values of Indian constitution, have become either indifferent or supporters of a regime that is taking India towards authoritarianism and majoritarianism.

The Christian community in India, especially the bishops, priests and nuns, have to introspect: Why are hatred, violence and atrocities on the Christians increasing in India? What are the remedies and precautions to be adopted? In spite of the repeated and increased attacks on the minorities, Muslims and Christians, there has been no collective reflection and planning strategies on the part of the leadership of various Christian churches in India.

Crisis is an opportunity to evaluate, reinvent and reorient an organization. It seems that the churches in India, because of their colonial legacy, are reluctant to undergo a process of change. The time has come for the Churches in India to remember what Peter Drucker has said, “If you let the past control you, you will have no future”. Is not clinging to the past blindly makes the Churches in India less relevant and influential, and thereby susceptible to the Hindutva onslaughts?

There is an urgent need for introspection on the part of the churches in India. The tectonic socio-political changes taking place in India and transformation of India into a Hindutva Rashtra call for rethinking and reinventing the Catholic Church in India through a collective process.

As in the case of any organization, the problems and challenges of the Church are both internal and external. The external challenges arise out of the context in which the church functions. Rising middle class, its shift from the secular ethos to Hindutva ideology and its influence on the politics of the country; increasing inequalities, especially the widening gap between the rich and the poor; majoritarian ideology of Hindutva replacing secularism and the shrinking space for civil society, dissent and human rights are the major challenges emerging from the context. Failure of the Church to respond to these challenges makes it irrelevant.

In order to prepare the Catholic Church in India to face the internal and external challenges an all India seminar on the pattern of ‘Church in India Today” held in 1969, could be convened with the following objectives. 1) To reflect and analyse the present social, economic, political, religious and cultural context of India and examine the changes needed in its structure and ministries.  2) To identify the challenges, especially the challenges from the Hindutva forces, to the Church and its mission. 3) To prepare a relevant and effective action plan in order to respond to the challenges effectively.

The Catholic and Protestant Churches are dying in Europe and every year lakhs of people are leaving the Church. According to Wikipedia, the German Catholic Church lost 402,000 members in 2020and the Protestant Churches had a membership loss of 440,000 in the same year. The failure of the Churches in Europe to introspect and reinvent themselves is the main reason for their present predicament. Reluctance on the part of the Catholic Church in India to reinvent itself at this critical juncture may lead it to the same fate of the European Churches.