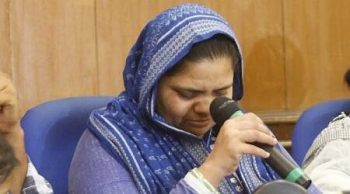 In a shocking decision that is a grievous travesty of justice, the BJP government in Gujarat on Independence Day granted remission and released eleven convicts undergoing life imprisonment in the case of gang-rape of Bilkis Bano and murder of her family members. Bano was gang-raped and seven of her relatives, including women and children, were murdered before her eyes during the 2002 communal riots in Gujarat.

In January 2008 a special Central Bureau of Investigation (CBI) court in Mumbai  had awarded the 11 convicts life imprisonment after it found them guilty of gang-rape and murder. The Bombay High Court later upheld the conviction.

When the Bombay High Court upheld the sentences of the convicts in 2017 Bilkis had said: “This verdict does not mean the end of hatred but it means that somewhere, somehow justice can prevail. This has been a long, never-ending struggle for me, but when you are on the side of truth, you will be heard and justice will be yours in the end.”

That the release of the convicts was done on a day when Prime Minister Modi spoke very eloquently in his independence day address to the nation from the ramparts of the Red Fort about the need to respect and protect women has added shame to the premature release of the life convicts.

Defending the decision to release the convicts, the additional chief secretary (Home), Gujarat, Raj Kumar, as reported in the Indian Express, said: “The 11 convicts have served a 14-year sentence in total. According to law, a life term means a minimum period of 14 years after which the convict can apply for remission. Then came the decision of the government to consider the application… Based on eligibility, prisoners are granted remission after recommendation of the prison advisory committee as well as district legal authorities.”

In the Bilkis Bano case, Mr Kumar said, “among the parameters considered are age, nature of the crime, behaviour in the prison and so on. In this case the convicts were considered eligible for remission after considering all the factors since they had completed 14 years of their life term.”

In this context the Gujarat government maintained that in May on a writ petition by one of the convicts, Radheshyam Bhagawan Das Shaw, the Supreme Court had directed the state government to consider his application for remission and premature release under the state government 1992 policy of remission to prisoners. The policy pertains to the early release of life convicts who on or after 12 December 1978 have served out 14 clear years of imprisonment.

Following the Supreme Court directive, the Gujarat government had set up a committee headed by the Godhra District Collector a few months ago. The committee made a unanimous recommendation to release the 11 convicts.
Section 432 of the Cr PC grants the state governments the power to remit sentences. However, under section 435 of the Cr PC, consent of the Union Government is necessary for the premature release of prisoners specially in cases where the offence was investigated by a central agency like the CBI.

Further according to the guidelines issued by the Union Home Ministry in June 2022 under a special policy formulated as part of Azadi ka Amrit Mahotsav or the celebration of 75 years of independence for the release of convicted prisoners, special remission is to be granted to prisoners on 15 August 2022, 26 January 2023 and 15 August 2023.

However, prisoners sentenced to life imprisonment and rape and murder convicts ARE NOT entitled to be prematurely released as per these guidelines. In the present case, no notice was issued to the victim Bilkis Bano before the Gujarat government prematurely released the convicts. This is particularly condemnable considering the fact that the convicts had, according to the victim, issued death threats against her. The promptness with which the Gujarat government released the rape and murder convicts violates the very spirit of the Verma Commission’s recommendations post-Nirbhaya case.