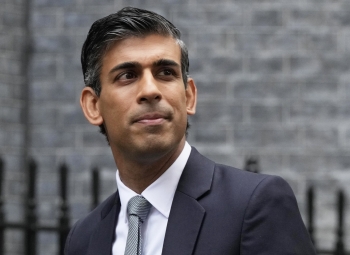 Indians are proud of the achievements of people of Indian origin in other countries like the USA, Canada, UK and other European countries. CEOs of some renowned multinational companies have people of Indian origin as their CEOs. For example, Sundar Pichai of Alphabet Inc, Parag Agrawal of Twitter, Satya Nadella of Microsoft, Shantanu Narayen of Adobe Inc, Arvind Krishna of IBM and Laxman Narasimhan of Starbucks are some of them.

They are not discriminated against because of their religion or caste in the countries where they have received citizenship. On the contrary, their achievements are recognized and celebrated. Rishi Sunak is the latest in the list of the people of Indian origin who could capture the attention of the whole world, as he has become the prime minister of the United Kingdom.

Rishi Sunak’ rise to the post of UK’s PM is historical because he is the first non-white leader of the country, and the first Hindu prime minister.  It was a historic moment – “a former imperial power being led by someone whose heritage rests with the colonised rather than the colonisers”.

Rishi Sunak was born in Southampton in 1980 to Indian parents who had migrated to the UK from East Africa. The elevation of Indian origin Rishi Sunak to the prime minister of UK is a moment of pride for Indians and at the same time an occasion for introspection. On the one hand, through hard work, determination and perseverance Sunak could rise to the top of the political ladder. On the other hand, the non-discriminatory socio-political environment of UK has been conducive to his emergence and growth as a politician.

The Constitution of India envisages a society/country that is inclusive and non-discriminatory that provides freedom, justice and equal opportunities to all. At the same time, a majoritarian ideology that is exclusive and discriminatory also existed in India at the time of independence. Gradually this ideology got momentum and acceptance, and for the last eight years it has become the dominant ideology under the leadership of the Bharatiya Janata Party. The socio-political, cultural and religious context of India has been shaped by this ideology. The last eight years has seen unprecedented growth in hate speech, hate messages and violence against Muslims and Christians and demonization and exclusion of Muslims. That is why many opposition party leaders, while appreciating the election of Rishi Sunak as PM, reminded the Indians, the ruling party and its supporters that India has to learn from the UK.

Leaders of many political parties in India expressed their happiness on the election of Rishi Sunak as the Prime Minister of UK. At the same time, they raised a question whether this can happen in India in the present socio-political context. Some of them reminded the BJP of its opposition to Sonia Gandhi becoming the prime minister of India in 2004, when the United Progressive Alliance (UPA) under the leadership of the Congress won the Lok Sabha election.

Former chief minister of Jammu and Kashmir Mehbooba Mufti said, “Election of Rishi Sunak, a person of Indian origin as the prime minister of UK, is a moment of pride; but we Indians have to take it as a lesson. Briton could accept a leader from a minority community. We Indians are still bound by the discriminatory and divisive laws like CAA (Citizenship Amendment Act) and NRC (National Register of Citizens)”. Welcoming the election of Rishi Sunak, Mahua Moitra of TMC said that India has to be more tolerant.

P Chidambaram and Shashi Tharoor of the Congress welcomed the election of Rishi Sunak and said that India also has to follow this practice.  "First Kamala Harris, now Rishi Sunak. The people of the US and the UK have embraced the non-majority citizens of their countries and elected them to high office in government," Chidambaram said on Twitter. "I think there is a lesson to be learned by India and the parties that practise majoritarianism," he also said. Tharoor said, "If this does happen, I think all of us will have to acknowledge that the British have done something very rare in the world, to place a member of a visible minority in the most powerful office. As we Indians celebrate the ascent of @RishiSunak, let's honestly ask: can it happen here?"

The BJP spokespersons came up with a counter argument that Dr. Manmohan Singh, a Sikh , was prime minister of India for ten years. This argument appears to be hollow because according to Hindutva protagonists, Jainism, Buddhism and Sikhism are religions born in India and they come under the wider umbrella of Hinduism. The Hindutva ideology sees all religions born in the Indian subcontinent as similar, "Indic" religions. Moreover, RSS or BJP has never declared that they have modified the ideology of Hindutva as expounded by RSS ideologues: VD Savarkar and MS Golwalkar. Golwalkar has written explicitly in his book, “We or Our Nationhood Defined”, that Muslims and Christians have only two options, either to become Hindus or to live in India without any rights, including the citizenship rights.

“The foreign races in Hindustan must either adopt the Hindu culture and language, must learn to respect and hold in reverence Hindu religion, must entertain no idea but those of the glorification of the Hindu race and culture, i.e., of the Hindu nation and must lose their separate existence to merge in the Hindu race, or may stay in the country, wholly subordinated to the Hindu Nation, claiming nothing, deserving no privileges, far less any preferential treatment — not even citizen’s rights”. (We or Our Nationhood Defined by MS Golwalkar)

Golwalkar rejected the concept of ‘territorial nationalism’, the modern variant of nationalism which identified a state with its territory and bestowed equal rights of citizenship on all those who lived within it. He and RSS became passionate advocates of Cultural Nationalism. This is diametrically opposed to Civic Nationalism, envisaged in the Indian Constitution.

Ever since BJP came to power in 2014 under the leadership of Narendra Modi, it has been implementing policies to realize the vision of the RSS. Passing CAA (Citizenship Amendment Act), Love Jihad laws and stringent anti-conversion laws passed by several BJP ruled states are a few prominent examples. Exclusion of Muslims who constitute 14.2% of the Indian population is reflected in their representation in the BJP. Out of the 395 BJP Parliamentarians, Lok Sabha and Rajya Sabha together, there is no single Muslim and no BJP MLA in 31 assemblies of states and Union Territories. This fact exposes the hypocrisy of the slogan, Sabka saat sabka vikas (Support and development of all).

There have been some attempts in recent months by the leaders of RSS, the ideological parent of the BJP, to create an impression that the RSS is not against the Muslims. RSS Sarsanghchalak Mohan Bhagwat agreed to engage a few Muslim intellectuals in dialogue and he visited a madrasa and a mosque in Delhi. It was reported in the media that this was the first time he visited a mosque. With regard to the Gyanvapi Mosque controversy, he had warned the Hindutva hotheads “not to look for a shivling in every mosque”.

The Muslim community is divided over the initiative of some Muslim intellectuals to have a dialogue with the RSS leaders. Those who oppose the initiative are of the view that the RSS is not sincere in its dialogue with Muslim community. They have pointed out that Mohan Bhagwat raked up the issue of “population imbalance”, even though one of the Muslim intellectuals had explained to Mohan Bhagwat, quoting the government statistics, that the decline in the growth rate of Muslim population during 2001 and 2011(-4.7%) was more than that of Hindu population (-3.1%).

In order to create a conducive atmosphere for dialogue the leaders of the Sangh Parivar, especially the top leader of RSS and the head of the government, the prime minister, should send a strong message to all Sangh Parivar organization to stop taking law into their hands and threatening and attacking minorities on any assumed or imagined defaming of Hindu religion. It was reported in Matters India on 26th October that the right-wing Hindu activists burnt firecrackers in front of a Catholic school in Khandwa diocese to protest against staging a street play on the environmental protection and safe celebration of Diwali. The school students had put up the play to educate students how to celebrate Diwali without damaging the environment. The right-wing groups interpreted it as defaming the Hindu festival and Hindu religion. They even threatened the school management of serious consequences, if such events are repeated. Even the efforts to educate students on protecting the environment is interpreted as denigrating Hindu religion. This kind of behaviour on the part of the Hindutva outfits leads to lawlessness and deep insecurity among the minorities.

Rishi Sunak could climb to the top of the political ladder and become the prime minister because the UK practices equal citizenship that is the bedrock of secular democracy. This is an occasion for the leaders of all political parties to reaffirm their commitment to the core values of the Indian Constitution, particularly equal citizenship. Against this backdrop, the Bharat Jodo Yatra led by Rahul Gandhi deserves mention. The unprecedented support to the yatra by the common people is an indication that the exclusive and divisive Hindutva ideology can be effectively countered, if the political parties are able to come together and present a counter narrative. Let all political party leaders, especially the ruling party leaders, listen to what Rishi Sunak told in his short inaugural speech. “I will work day in and day out to deliver for you. This government will have integrity, professionalism and accountability at every level."