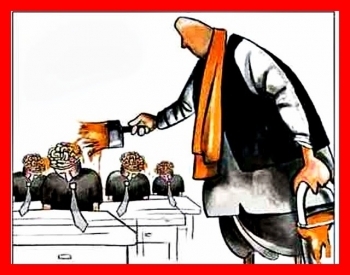 In the name of rationalization of curriculum, many topics have been removed from the CBSE syllabus (April 2022). From the tenth standard syllabus, the topics excluded are: Democracy and diversity; rise of Afro-Asiatic Islamic states; history of Mughal Courts; non-alignment movement; impact of globalization on agriculture; popular struggle movements; poems of Faiz in the section of Communalism; and challenges to democracy.

Criticizing this, Congress leader Rahul Gandhi labeled CBSE as Central Board for Suppressing Education, and called RSS, the force behind these policies, as Rashtriya Shiksha Shredder. All India Democratic Students Organization has launched a signature campaign against it. As such when the BJP comes to power, one of its major goals is to modify or change the education policy and curriculum to tune it to its version of sectarian nationalism. Its focus is on faith-based knowledge away from scientific temper and rational approach to social, historical issues.

One recalls when BJP-led NDA came to power in 1998, Dr. M.M. Joshi was the HRD Minister. He changed the history books to introduce communal angle to historical events. Accompanying this was the introduction of Paurohitya (Priest craft) and Karmakand (Rituals). In contrast to scientific astronomy, astrology started being taught. There was an interesting paradox. In astrology Saturn was the trouble-maker, while in astronomy Saturn was taught as a planet of Sun. In opposition to biological understanding that sex of child is determined by X or Y chromosome coming from father, the Putrakameshti Yagna (ritual to get male child) was being taught as the method for getting the much sought-after son.

The pattern continues. RSS has already formed Shiksha Sanskriti Uthan Nayas, an RSS affiliate, to campaign for influencing the MHRD Ministry. It has been pressurizing NCERT for removal of the following among many other things: English, Urdu and Arabic words; the thoughts of Rabindranath Tagore; extracts from painter M F Husain’s autobiography; references to the Mughal emperors as benevolent; the BJP as a “Hindu” party; an apology tendered by former Prime Minister Manmohan Singh over the 1984 riots; and a sentence that “nearly 2,000 Muslims were killed in Gujarat in 2002”. As such, the recent recommendations to NCERT are continuation of the same agenda which is working for its goal of Hindu Rashtra.

It had also been putting pressure to undertake Bharatiyakaran of education. Under its pressure, many publishers have buckled. A major example is that of Penguin pulping the book ‘The Hindus: An Alternative History’ by Wendy Doniger. This was an academic work which looked at various aspects of Hindus, particularly the plight of women and Dalits. One RSS leader Dinanath Batra has been very active in this area and has produced a number of books for school children. In Gujarat, 42,000 schools introduced his books after their translation to Gujarati.

The pattern of the curriculum presented in these books spells things like Qutub Minar was a Hindu Monument called Vishnu Stambh built by Samudra Gupta. These books totally bypass the syncretic traditions and present the Kingdoms through the eyes of king’s religion. The focus is to present the view that foreign Muslim rulers were doing atrocities on the native Hindus. It is through this lens that Kings of Mughal dynasty are presented. Now in the new scheme of things the Mughal Courts and their pattern will be totally eliminated. Even during the much-maligned Mughal period, the Mughal Kings had Hindu associates (Akbar and Mansingh, Aurangzeb and Raja Jaising, and so on).

In these books, Muhammad Gazni and Ghori are the key villains. Gazni had many Hindu generals (Tilak, Sondhi, Harzan, Rai and Hind) in his army. Shivaji and Rana Pratap are presented as the main heroes. Incidentally, Shivaji’s confidential secretary was Maulana Haiser Ali and Rana Pratap had Hakim Khan Sur as one of his generals.

The disturbing changes brought by BJP are an attempt to construct a history to suit its narrative of Hindu nationalism. Gandhi (Hind Swaraj) and Nehru (Discovery of India) gave the history of India, which was inclusive and reflected the emerging National movement and underlying concept of Indian Nationalism. The changes brought in by BJP in education were called as Saffronization by its critics. Initially, BJP and company responded to this criticism by ignoring the phrase. Later they aggressively said that the syllabus needs to be saffronised.

The current changes are in tune with the political requirements of RSS Combine. Mughal Court was an example of Hindu-Muslim unity, so it can’t have a place in BJP scheme of things. Faiz Ahmad Faiz, who was a democrat and secular and nominated for Nobel Prize for Literature, is an icon of literature for progressive democratic values. Having a poet with Pakistani identity will surely be big ‘no’ for the present ruling dispensation.

Currently, one of the aims of the Government is to undermine the first Prime Minister of India, the architect of Modern India, one who stood tall for his commitment to democratic and secular values, Jawaharlal Nehru. His major contribution on global scene was to evolve and work for Non-Alignment Movement. This movement gave a new direction to global alignments. It also helped India to develop taking advantage of collaboration of different camps in the World despite the Cold war. So, the chapter on Cold War era and non-alignment has been kept out of the syllabus.

The ruling party at the Centre and its ideology want to push the country in authoritarian sectarian state, where democracy has no role, so that chapter on pluralism and diversity is out. India’s pluralism and diversity have a major role to play in the culture and strength of India. India’s freedom movement and Indian Constitution respect our diversity. But uniformity in language, religious traditions and other cultural aspects is what is being aimed at.

Overall, the changes proposed, and to be implemented, are in tune with the concept of nationalism, and the culture which sectarian nationalists want to impose on the country. These need to be opposed and ensure that our syllabi are in tune with rationalism, scientific temper and pluralism of India.