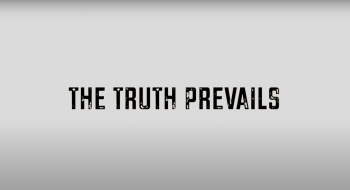 The Sanskrit phrase ‘satyamev jayate’ means ‘truth alone prevails or triumphs’. It is inscribed in Devnagari script at the base of the national emblem of India, referring to the lion capital of Ashoka. Independent India adopted it as the national motto.

The slogan ‘satyamev jayate’ was popularized and brought into the national lexicon by Pandit Madan Mohan Malaviya in 1918. He was serving as President of the Indian National Congress for the second of the four terms then.

‘Satyamev jayate’ is a mantha from Mundaka Upanishad. As the national emblem, it is considered the symbol of the moral authority of the government, in the day-to-day functioning of the government. It is found in all official communications, naturally so.

As a matter of fact, political leaders in all countries, leaders in other domains also, tell lies at will and people soak them in. Why should people believe in the lies spoken by their leaders, especially of the political ones? This is a crucial question that requires being answered.

“We must reject the culture, in which facts themselves are manipulated and even manufactured”, said Joseph Biden, the new president of the United States. This was an ardent invitation to truth, in the wake of a heap of falsehood around as he took over his office.

For German and Soviet dictators, Hitler and Stalin respectively, lying was an ‘essential tool of government’, not merely by habit but as a convenient way of sanding down unwanted facts. Most governments in the world today resort to lying on a grand scale to gain power and remain in power.

In the words of Alexandre Koyre, “lying was never more widespread than today or more shameless, systematic and constant… The grosser, the bigger, the cruder the lie, the more readily are the lies believed and followed”.

The social media and the enormous power of technology have made the spreading of lies almost instant and the impact has become deadly. When the mainstream media is subservient to the rulers, the ordinary citizen has no chance of even hearing the truth. Examples abound in every country.

The corona pandemic times were highly vulnerable due to the sense of insecurity, economic, social, psychological and spiritual. Any hope-generating information has been gulped in and believed. Politicians, along with the religious and the corporate sector, literally made the best advantage out of the situation through lies and half truths.

Delving deeper into the tendency of the humans to believe in falsehood, conspiracy theories and falsified history, it is not difficult to arrive at the roots of human deprivation, of food, clothing, shelter, freedoms and ultimately the dignity of the human being.

Human beings have the terrible need to make sense out of the reality in front. When usual explanations do not work, they search for more. The more out of the ordinary the explanation is, the more attractive it becomes. No wonder, people swallow the lies down, spontaneously so.

The opinion of the leaders makes a huge impact because of the power positions they hold. For school-going kids, ‘my teacher told me’ is the final word. What the leader says is like the Gospel word for the people, especially the illiterate masses.

One has to read the innocence of the ordinary human being also in the context of the crisis of an economic system, which has failed the majority. Every crisis is an opportunity for the liers, in order to ‘fish out of troubled water’. Or else, the politicians will trouble the water and fish.

“Neo-liberalism simply re-produces itself by resorting to magic theories of spillover or trickle as the only solutions to societal problems”, observes Pope Francis. He criticizes the neo-liberalist governance of the world, arguing that the alleged ‘spillover’ does not resolve the inequality and the ensuing forms of violence.

‘When you are totally deprived, you tend to believe anyone who promises to save you’. This is the logic of the tragedy that emerges from falsehood. When religious beliefs and practices are manipulated to convey a particular line of thinking, it mesmerizes people.

When history is re-written or re-interpreted, lies are being written. When certain statues are pulled down and others are erected, there is beheading of truth and coronation of lies. When names of the places, institutions and roads are changed, it is truth that is meddled with.

When entertainment media, particularly television, internet and social media, fill themselves with half-truths and untruths, the viewers are unconsciously brainwashed. For a drowning human being, even the thinnest handle will bring hope.

The promises and lies that the politicians spread out every day and every moment become those thin handles that they hold on to. Unfortunately, they never realize that these lies could only take them deeper into the water and ultimately make them get drowned.

The Indian politicians seem to compete with the entire world for filling the public space with half truths and full lies. Where our dear country, the world as well, is heading for? Well, only time can tell us what doom is awaiting us.

The leaders in the religious sector are not behind in propagating lies and half truths. There is a lot of untruth in the superstitions, theological doctrines, pious stories and stipulations that are in the religious air of the country, much more than any other country. Well, they are lies in the disguise of God.