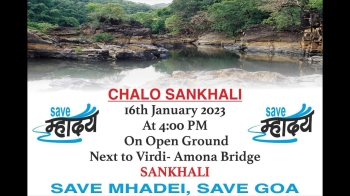 Intensive agitations have only brought about interim solutions to the problems plaguing Goa. Appeasing tactics employed by successive governments to mollify the protesters have often denied the state practical solutions to long pending issues.

Today, SAVE MHADEI, SAVE GOA as the clarion call of Goa and Goans at large serves to be a public backlash for the procrastinating ways of the elected governments which have miserably failed to safeguard the interests of the region and is bound to rock the government of the day.

“Inter-state water disputes are a continuing challenge to federal water governance in India. Rooted in constitutional, geographical and institutional ambiguities, they tend to become prolonged conflicts between the states that share river basins.” (Federalism and Inter-state River Water Governance in India, By Sayanangshu Modak and Ambar Kumar Ghosh)

The dispute over Mhadei river began in the 80s and grew stronger in the subsequent decades. The trigger was Karnataka’s move to design a number of dams, canals and barrages to route the river water to the Malaprabha basin.

Karnataka claims that channelling the river water into the basin of Malaprapbha, a tribute of Krishna, would meet the requirements of water-scarce districts of Bagalkot, Gadag, Dharwad and Belagavi.

But Goa contends that its population is dependent on the river’s natural path and any move to divert it would affect its fragile ecosystem.

It further claims that the ingress of salt water in the river, which is dependent on monsoons, will ultimately end up killing the state’s mangroves and green belt, disturb the relationship between the people and the land, as well as the ecological balance (Express Web desk).

The Chief Minister retorts that the on-going Mhadei water dispute between Goa and Karnataka is a 30-year-old dispute and one which cannot be solved in a jiffy with one visit to the national capital. Maybe he is right!

But with the Mhadei issue having flummoxed governments in the state for well over half its independent existence, one should not be grudged against for harbouring a feeling that not enough has been done all these years by the powers-that-be to resolve the issue once and for all.

It does appear that by dilly-dallying, governments over the years in the state have only managed to prolong the agony without any visible signs of relief forthcoming in the future in all such matters.

Let us for instance take the decision by the Sanquelim Municipal Council to revoke the permission granted to hold a public rally on January 16 on Mhadei issue at the town’s civic grounds on the premise that it would cause inconvenience and commotion on a day of the weekly bazaar in the area!

But when the SMC chairperson has come out openly flaying the decision to revoke the permission saying that the council was not taken into confidence, it becomes more than obvious that the Chief Officer has succumbed to pressure and done a U-turn which clearly goes against the spirit of saving Mhadei.

However, for a government that has decided to vehemently demand that the Centre withdraw the approval to the Detailed Project Report of the Kalasa-Bhandura (canal) drinking water project on Mhadei and that it forms a Mhadei Water Management Authority to stop illegal diversion of water, it comes as a huge shock that it is in jitters no sooner the public decides on a show of solidarity on the matter.

On the contrary, as has been so rightly observed, the Chief Minister should extend support to any public discourse on Mhadei and use it to leverage the state’s position with the Centre.

Moreover, with the intent that is shown in taking up the issue lately, one cannot think of any strong reason for the government to run away from scrutiny on the issue.

At the same time, one is at pains to understand the haste shown by the Opposition to take on the government whenever such adverse decisions which affect the region are promulgated by the Centre.

Let us not forget that for almost a decade now, many of the state’s legislators have oscillated between the Opposition and ruling sides only to have their opinions vacillating according to their current political loyalties.

It is not about the issue being exploited to score brownie points! An unbiased approach to the problem with an eye to offering a sustainable solution is the key rather than mudslinging leading to the creation of a political atmosphere which will be counterproductive to the efforts being made to resolve the issue.

It is a matter that concerns the whole state and does not deserve the kind of political antagonism that it has invited between the government, the Opposition parties and the general public.

Just as the Cauvery issue, is the Mhadei conflict between Goa and Karnataka too destined to linger on without any feasible solution in sight!

Another apprehension that one could broach at this point is whether the warring factions, even if an understanding is arrived at, would religiously stick to the terms and conditions of a water-sharing agreement.

But all that is for later. Right now, the need is for a balanced approach to untangle the Mhadei issue.

No doubt the Centre’s go-ahead to Karnataka’s water diversion project has been made in a bid to boost the electoral prospects of the ruling party in Kittur in Karnataka region in the poll-bound state.

It has been suggested that both the states need to shed the regional approach as the solution lies in cooperation and coordination, and not in conflict. The solution needs to be people-centric.

Nevertheless, the sort of politics being played over the issue will definitely pose threats of far-reaching consequences for both the sides.