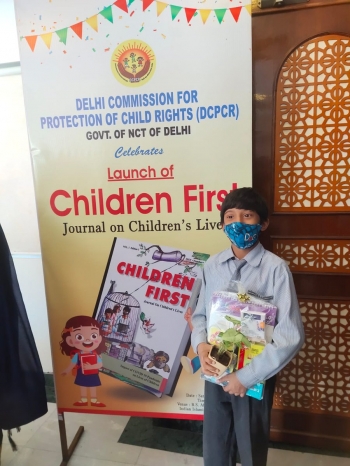 Last week, the national capital witnessed two important events from the perspective of children. One, the Delhi Commission for Protection of Child Rights (DCPCR) launched Children First, a journal on children’s lives. Two, the government finally decided to reopen all schools and educational institutions for all classes with a blend of both physical and online classes.

The parents will not be forced to send their wards to the schools while the staff have to be fully vaccinated. At no point of time should the attendance be more than 50 per cent. The news might have brought cheers to the children, who have been missing their school.

The last one-and-a-half years have been devastating in every sense for almost everyone, be it children, youth or the elderly. Among them, the children are the most affected. The adults might have struggled to keep their family going in view of their reduced income but they have a peer group with whom they could express their feelings.

The voices of children have remained unheard, as they have no platform to vent out their grievances. In any case, they have little or no capacity to make the adults understand their thought process. Even the most educated ones, who call themselves child rights practitioners, including this writer, would have behaved many times in an unprofessional manner with a child.

In view of this, the journal released by DCPCR holds a lot of importance as it reflects upon several issues affecting children from education to mental health to socio-emotional development and so on. The well-researched journal has many contributors, including educationists and child rights activists. What catches one’s attention is the message from the DCPCR chairperson, Anurag Kundu, who speaks about his experience of visiting a government school and his interaction with a boy, who had less than 30 per cent attendance.

A child right practitioner, Kundu shares how he tries to convince the boy to attend the school regularly. “Being an ‘adult’, I tried to teach the ‘child' why it was important to attend the school regularly. I emphasised how learning is linked with school attendance and reinforced that continuous absence from school explains his inability to read basic text”, he says.

There was a smile throughout my ‘lecture’ which he patiently (or perhaps absent-mindedly?) heard. Then, he called up his friend from the same class. He introduced his friend to me and said, “he attends school regularly, he cannot read either. At least I get to play.” The dialogue certainly happened during the pre-pandemic phase but laid bare the harsh reality of our education system.

Even children studying in good private schools do not possess age-appropriate learning outcomes, forget government schools. This has been reiterated several times in various research reports, be it in national achievement surveys (NAS) or in Annual Status of Education report (ASER) conducted by the Ministry of Human Resources and Pratham respectively.

After the pandemic, the learning loss has increased. Various research reports published in the journal have delved upon the factors that have led to regression in learning outcomes, be it inequitable access to the Internet or devices, or inability to participate in virtual classes or lack of interaction amongst students or digital fatigue and so on.

A few quotes from the students and teachers speak volumes about the inadequacy of virtual classes and lack of human touch. In other words, the pandemic has reiterated the fact that digital classrooms cannot replace the chalk and board classrooms. They can only supplement classroom teaching and facilitate students in understanding difficult concepts easily.

In view of this, the government’s decision to reopen schools for all classes might bring the much-needed cheer amongst the students. Yet, for many parents, it certainly has added on to their fears as the children have not been vaccinated so far.

Many researchers have been warning of a third wave, which might be dangerous to children. Clearly, the standard operating procedures (SOPs) issued by various state governments, including Delhi, speak a lot about the safety standards that have to be followed to ensure minimum infection rate. Yet, they lack clarity on the procedure the schools should follow to make up for the learning loss that the children faced during this period.

The DCPCR journal has compiled various surveys that have been conducted since the pandemic hit the country. One of them has been conducted by Azim Premji University. The document not only captures the loss in learning outcomes but also shows how children, who had no access to digital platforms, started working in small shops to earn money.

The report quotes a teacher from Uttarakhand who says, “I was coming to school and meanwhile, I met one of my students on the way. He had started working in a cloth shop. When he met me, he said, Madam, suit le jao, nayi variety ayi hai' (buy a salwar-kameez set; nice ones have arrived for sale). A similar kind of incident occurred later – one of my students met me and he was working at a shoe shop. He said to me, Madam, bare ache jute aye hain, dukaan pe aa jayiye (very nice footwear has arrived; please come to the shop). I was thinking that rather than talking about education, the children have started talking about business.”

These might look like isolated incidents as no data is currently available to show how many children have started working, how many of them have gone back to their villages, especially from migrant families and how many of them will come back or take admission to a school. Clearly, it seems to be an uphill task to bring these children back to school. But do we have a strategy in place to get them to schools?

If we compare our guidelines with those of other countries, we fall short on many aspects like equity. Countries have focused on methods to support children from disadvantaged families, who had minimal or no access to virtual classrooms during the lockdown. Not only this, the guidelines speak about socio-emotional development of children, their mental well-being, rearrangement of curriculum to reinforce academic skills, including language learning and mathematical skills, training support for the teachers and in many cases increased budgets for hiring more staff for giving individualised attention to children.

Our guidelines do not even acknowledge the presence of these gaps. In fact, a recent study, “Education Finance Watch” 2021 conducted by the World Bank and the UNESCO shows that out of 29 countries, (high-income, low-income and low-middle income countries) many countries, which were reducing their education budgets during the pre-pandemic period have now increased their budgets to cater to the changing requirements of children. Out of 14 low-middle income countries, five of them increased their spending substantially. However, India reduced its spending by 9 per cent. Uzbekistan gives us company in this regard.

Recently published School Children’s Online and Offline learning (SCHOOL) survey showed that more than 25 per cent of the children have moved from private schools to government schools. The survey was done in 15 states and Union Territories. If these findings are extrapolated to the entire country, we can expect around 20 million children to take admissions to government schools.

The question is with reduced public spending on education will we be able to cater to the demands of these children? Not only this, will we be able to bridge the huge learning gap that has been created with the onset of the pandemic? Do we have enough teachers in these schools? What about the training requirements of teachers who will have a bigger challenge of catering to the differential needs of these children?

Instead, many of our schools have gone back to fast-tracking the syllabus. The students are still being evaluated the pre-pandemic way as if nothing changed. In the mad race of getting marks, children may feel more stressed. It is time to accept the ground reality, formulate effective strategies, ensure their effective implementation so that we can make good the loss that happened during the last one and a half years.

(The writer is a company secretary and can be reached at jassi.rai@gmail.com)