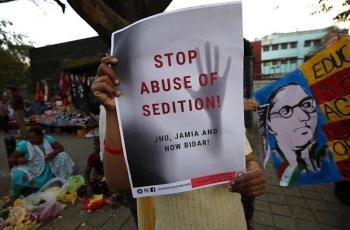 The Supreme Court of India in a historic order on May 11 put on hold trial under the 152-year-old British era sedition law extensively used during British rule and subsequently by independent India’s Union and state governments to suppress political dissent.

“All pending trials, appeals and proceedings with respect to the charge framed under section 124 A of IPC be kept in abeyance. Adjudication with respect to other sections, if any, could proceed if the courts are of the opinion that no prejudice would be caused to the accused,” the bench of Chief Justice N.V. Ramana and Justices Surya Kant and Hima Kohli said in their interim order on a bunch of petitions challenging constitutional validity of the law.

The constitutional validity of section 124 A was upheld by the Supreme Court of India in Kedar Nath v the State of Bihar in 1962. However, the court had in that order added a caveat that “a person could be prosecuted only if his acts caused incitement to violence or intention or tendency…. to cause disturbance of public peace.”

In the present order, the bench said, “we hope and expect that the State and Central governments will restrain from registering any FIR, continuing any investigation or taking any coercive measures by invoking section 124 A of IPC while the aforesaid provision of law is under consideration.”

However, “if any fresh case is registered under section 124 A of IPC, the affected parties are at liberty to approach the concerned courts for appropriate relief” and “courts are requested to examine the reliefs sought, taking into account the present order passed as well as the clear stand taken by the Union of India.”

The directive placed before court states that “the interpretation of Honourable Supreme Court in the judgement in the Vinod Dua v. Union of India… ought to be scrupulously followed and adhered to” and “an FIR involving section 124 A will be registered only if an officer not below the rank of Superintendent of Police is satisfied and records his satisfaction in writing that the offence involves section 124 A as analysed by the Hon’ble Supreme Court in the captioned judgement.”

Referring to the Union government’s affidavit, the Court in its order said “it is clear that the Union of India agrees with the prima facie opinion expressed by this court that the rigours of section 124 A of IPC is not in tune with the current social milieu and was intended for a time when country was under the colonial regime. In the light of the same, the Union of India may reconsider the aforesaid provision of law.”

The court also said: “It is cognizant of the security interests and integrity of the state on one hand and the civil liberties of the citizen on the other. There is a requirement to balance both sets of considerations, which is a difficult exercise.  The case of the petitioners is that this provision of law dates back to 1898, and pre-dates the Constitution itself and is being misused.”

In this context the Bench pointed out that Attorney General K. K. Venugopal had “on an earlier date of hearing given some instances of glaring misuse of this provision, like in the case of the recital of the Hanuman Chalisa,” slapping sedition charges against two legislators in Maharashtra over recital of the prayer.

Sedition was not included in the original 1860 Indian Penal Code. Sedition was included as an offence in 1870 under section 124 A IPC through the Special Act XVII. The punishment for the offence of sedition prescribed was transportation “beyond seas for the term of his or her natural life.” Mercifully, independent India’s government in 1955 amended the provision for punishment making it life imprisonment and fine.

Even if the Supreme Court finally holds section 124 A of IPC unconstitutional or the Union government repeals the law, on the ground people’s lives are unlikely to change drastically in terms of civil liberties as long as the draconian provisions of the Unlawful Activities (Prevention) Act (UAPA) 1967 and the National Security Act are being widely misused.