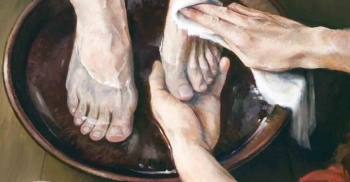 Servant Leadership: Need of the Hour

There is a very inspiring scene in the movie “Gandhi” directed and produced by Richard Attenborough. Congress leaders -- Nehru, Jinnah, Patel and others -- were holding a meeting at the house of Mohammad Ali Jinnah on the issue of responding to Rowlatt Act. Gandhiji was also invited for this meeting. A servant enters the scene of the meeting holding a tray with cups and tea to be served to the participants of the meeting. While talking to the leaders, Gandhiji took the tray from the servant and served tea to all leaders. Gandhiji was sending a great message to the Congress leaders that leadership is for service to people. Gandhiji was aware of the competition among the congressmen with regard to the leadership.

Jesus Christ on the eve of his crucifixion did a very symbolic act of washing the feet of his disciples. At the time of Jesus, washing the feet of a guest was done by a servant. After performing a highly symbolic act, Jesus gave his disciples a relevant and challenging message. “You call me Master and Lord: and you say well; for so, I am. If then, your Lord and Master have washed your feet, you also ought to wash one another’s feet. For I have given you an example, that you should do as I have done to you.”

Servant leadership is promoted by many companies because it creates a work environment in which employees at all levels of the organization feel respected, appreciated and valued. It creates a work culture that boosts the morale and engagement of the employees, leading to better performance of the company.

At the same time, the world is witnessing today emergence of right wing and autocratic leaders in many countries. These leaders are populist and some of them even exhibit signs of fascism. The world had seen the disasters caused by fascist leaders in the past. It appears that people do not learn from history. That could be the reason for the popular support autocratic and fascist leaders get in many countries.

The phenomenon of rising autocratic leaders is observed not only among the political class, but also among religious leaders, including the Catholic Church, despite having a Pope, in the person of Pope Francis, who is a role model of servant leadership.  Against this backdrop, there is an urgent need for educating people, especially the youth, about authentic leadership or servant leadership. Only when the families and educational institutions inculcate in young people the qualities and values of servant leadership, people will have a choice to elect such persons as leaders. Secondly, when people are aware of the characteristics of a servant leader, they will be able to make an informed choice while selecting/electing leaders at various levels.

Observing the leaders who were committed to the wellbeing of their people and who were even ready to lay down their live for their sake, attempts have been made by several people to spell out the characteristics or qualities needed for a servant leader. Some of them could be the following.

Listening: Servant leaders are always ready to listen to their team members and the people because they are convinced that they are chosen as leaders not to impose their dictates on the people, but to serve people, taking into account the needs and views of people. Before taking vital decisions, they enter into dialogue with all stakeholders to discern their views and suggestions. Secondly, they patiently and enthusiastically listen to the problems and difficulties faced by people. Thirdly, in conflicting situations, they listen to people and experts to find solutions, instead of imposing their solutions on the people.

On the contrary, autocratic leaders have only one way communication. They continue to tell people their “man ki bath” and impose their solutions on the people. Some autocratic leaders listen only to a section of people who are their blind followers and supporters and the wider public are left out. Some of them even claim that they have their mandate from God to impose their views on the people.

Servant leaders understand others so deeply that their actions are motivated by a genuine desire to help others. During the Covid 19 period hundreds of people empathized with the needy by reaching out to them even taking risk to their own lives. The former German Chancellor, Angela Merkel, opened Germany’s borders to more than 1.2 million refugees fleeing from war in Syria, and elsewhere because of her empathy. New Zealand’s Prime Minister Jacinda Arden became one of the most effective leaders of the world during the Covid 19 period because of her leadership style that focused on empathy.

Awareness of what they are: Servant leaders are aware of their strengths, weaknesses and shortcomings, and they have a realistic assessment of themselves. This awareness helps them to understand personal biases and set them aside while making decisions. Autocratic leaders suffer from the problem of exaggerated ego and overestimation of themselves.

Persuasive: Servant leaders develop persuasive skills and are able to arrive at consensus while taking decisions. Consensus is by far the most effective method of decision-making. If decisions are taken by majority, there will be always a minority that is discontent with the decision. Autocratic leaders may consult others, but they take decision and impose them on the people. Often consultation is a sham. Servant leaders value everyone’s opinion and regularly seek out opinions.

Develop other leaders: Building leaders means teaching others to lead, providing opportunities for growth and demonstrating by example. Jesus Christ is the best example for developing other leaders. He chose twelve disciples and they were with him. He developed them as leaders by delegating not only tasks but also authority. He sent them two by two to the field and when they came back, he had an evaluation with them and gave them his feedback. Jesus knew that if his mission is to be continued, there should be leaders who are imbued with his vision and values.

Mahatma Gandhi was another leader who developed other leaders. Gandhiji did not assume any office after independence or even before independence except for the presidentship of the Congress for a brief period. He remained as a moral leader and groomed an array of leaders like Jawaharlal Nehru, Sardar Vallabhbhai Patel, Maulana Abul Kalam Azad, Acharya Kriplani etc. The saying of Tom Peters, “Leaders don’t create more followers; they create more leaders” is true of Mahatma Gandhi to a great extent.

Autocratic leaders want only followers who often function as sycophants. They are afraid of developing other leaders. Most of the political parties in India today have only one leader and all others are followers. As a result, with the death of the leader some parties face existential crisis.

Cultivate a culture of trust: Trust deficit is a main cause for cracks in many organizations and communities. A servant leader has trust in the sincerity and commitment of her team or community members. In the same way, He/she motivates the team or community members to trust each other. A community in which persons do not have trust in one another will be a horrible situation. Autocratic leaders do not trust the team members, even their sycophants.

Think long term: Servant leaders have an intuitive ability to foresee what is likely to happen in future, based on the past and the present. This foresight enables these leaders to plan ahead. They make plans after analysing the situation and their planning is participative, involving all stakeholders.

Act with humility: “True humility is not thinking less of yourself, it is thinking of yourself less”, says Rick Warren. Servant leaders do not ask, “who is right?”, but they ask, “what is right?”  Servant leaders put people above structures, rules, systems and schedules. Secondly, they give priority to others. Thirdly, they are ready to accept their mistakes and shortcomings and willing to make amends. On the contrary, autocratic leaders never accept their mistakes because of their self-righteous attitude. They even try to find the cause of their failures in others.

Stewardship and community building: Servant leaders always encourage collaboration and cooperation. They are able to create a sense of belonging in the members and foster team spirit in them and they care for the community.

They consider themselves not as masters and owners but stewards who are entrusted with the responsibility of safeguarding and multiplying the resources of their organization or community.  They assume complete responsibility for planning and managing available resources for the betterment and prosperity of the organization, team or community members, and stakeholders.