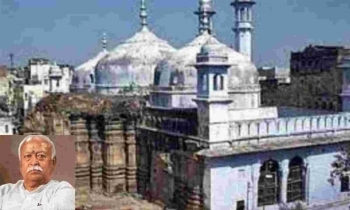 Shivling in Every Mosque? 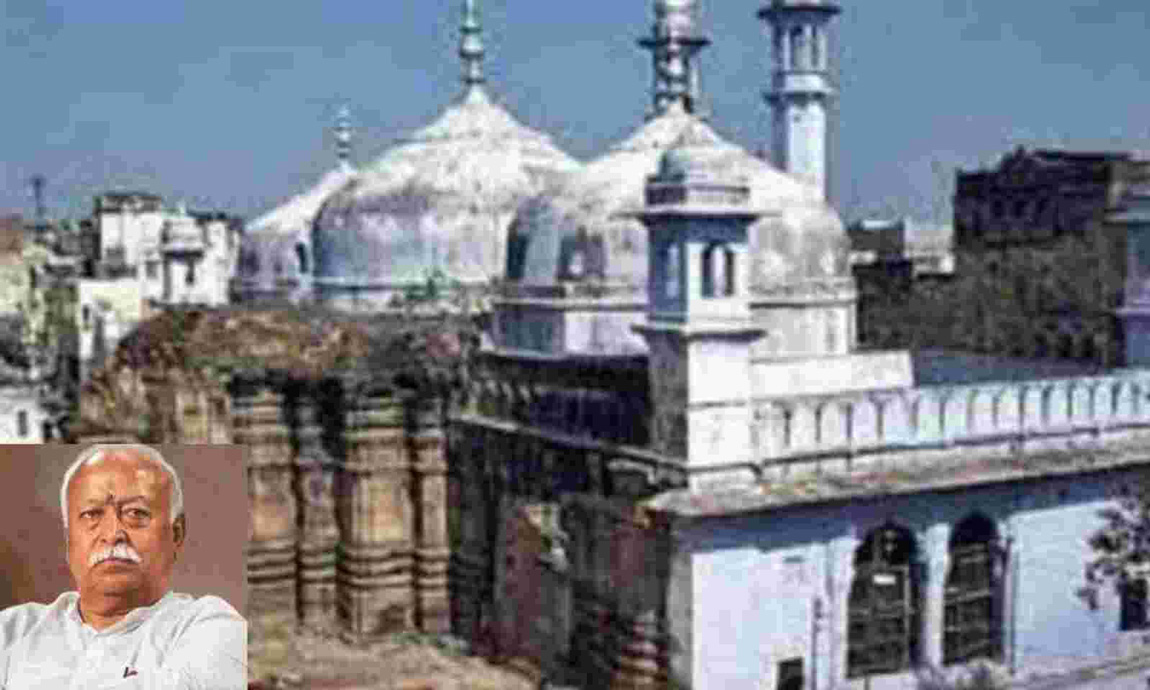 In a highly communally charged atmosphere due to the raking up of temple-mosque disputes at different places in India, the words of Mohan Bhagwat, the supreme head of the Sangh Parivar, “why look for Shivling in every mosque”, gives hope to all Indians who dream of peace. At the same time, it is unbelievable that the head of a pan-Indian organization, which had spearheaded the Ram Janmabhoomi movement, speaks the language of peace and reconciliation. What has been seen and experienced by many Indians, especially the minorities, since the launch of the Ayodhya movement, is the spread of unprecedented hatred and revenge against the Muslims. The waves of different frequencies of hatred and revenge climaxed in the clarion call to the Hindus by the speakers of Dharma Sansad to resort to mass murder of Muslims. It seems that the strategy of communal polarization is resulting in the operation of the law of diminishing returns. It also appears that Mohan Bhagwat could sense that the situation is getting out of control. That could be the reason for his conciliatory approach.

Addressing the concluding session of the RSS officer training camp in Nagpur on June 2, Bhagwat questioned the need to “look for a Shivling in every mosque (har masjid me Shivling kyun dekhna)” and said the RSS was not in favour of launching any other movement (andolan) on these issues. He also said that one should not raise a new issue every day. According to him, the Gyanvapi issue is to be sorted out amicably between the two sides and if the two sides decide to go to court, they need to respect the court.

There has not been any formal response from the BJP or the other members of the Sangh Parivar. But some extremist groups are not happy with the statement of Bhagwat. Responding to the statement, Jagatguru Parmhamsa Acharya Mahant said they would take back all the temples destroyed by the Mughal invaders. He also added that there is no doubt on the policies of the Sangh leader Mohan Bhagwat, but because of age he could have committed a slip of tongue. Many have expressed doubt whether the RSS will be able to control the members of its militant affiliates. “Those who are used for political purposes may have slipped out of the hands of the persons like Modi and Bhagwat; then it would be difficult to imagine what would happen,” wrote Kanhaya Kumar.

Further developments proved that the apprehensions of right-thinking people proved to be correct. The BJP suspended party spokesperson Nupur Sharma and expelled her colleague Naveen Kumar Jindal over their comments on Prophet Muhammad during a TV debate that have provoked backlash from the Gulf countries. India faced condemnation from as many as 15 countries over the comments of the two BJP leaders. Qatar, Iran and Kuwait called Indian Ambassadors in their respective countries and conveyed their strong protest. There were also widespread calls on social media for a boycott of Indian goods in Gulf countries.

"Allowing such Islamophobic remarks to continue without punishment, constitutes a grave danger to the protection of human rights and may lead to further prejudice and marginalization, which will create a cycle of violence and hate," told Qatar to Deepak Mittal, the Indian Ambassador. The Ambassador tried to mollify saying that the comments   "do not, in any manner, reflect the views of the Government of India. These are the views of fringe elements."

As reported in NDTV News, India’s trade with the Gulf Cooperation Council (CGC), which includes Kuwait, Qatar, Saudi Arabia, Bahrain, Oman and the UAE, stood around $90 billion in 2020-21. Moreover, millions of Indians live and work in GCC countries. Prime Minister Narendra Modi had taken special interest in recent years to strengthen economic ties with the energy-rich nations, the main source for India’s fuel.

It is evident that the BJP took action against two of its erring leaders only because of the pressure from the Gulf countries. The top leadership of the party kept mum for more than a week after the controversial comments were made by Nupur Sharma and Naveen Kumar Jindal.  If the BJP and the Prime Minister believe in respecting all religions, they would have condemned the highly provocative statements by the speakers at the dharam sansad at Haridwar and later in other places and they would have put an end to raking up new mandir-masjid controversies. The silence of the Prime Minister and top party leaders of BJP emboldened the hate mongers.

As per a report published in Jansatta, BJP took the drastic action against two of its activists because of five reasons:

2) controversy that erupted during the visit of Vice-President to Qatar;

3) the expected negative impact on trade;

4) negative media coverage on the BJP in other countries when BJP has launched a world-wide campaign, “Know the BJP”; and

5) fear of replication of communal violence that took place  in Kanpur while the PM  and the CM were in the town for a programme.

The justification given by the Indian government's representative that the derogatory statement on Prophet Mohammad was the view of “fringe elements” does not cut much ice. How can a national spokesperson of the BJP be a fringe element? The so-called fringe elements have come to the centre stage after the victory of the BJP in 2014 and 2019 and they are given a free hand. When they indulged in hate speech and violence the police and the administration in the BJP-ruled states looked the other side. India has to face humiliation because of the omissions and commissions made by the BJP and its governments in different states concerning hate speech and violence against the minorities.

Some of the hate speakers were promoted in the party hierarchy. Two years back Tejasvi Surya had made a regretful statement on Twitter about Muslim women. Then the government had to resort to damage control; but later he was promoted and made the president of the Yuva Morcha, the youth wing of the BJP. Similarly, Anurag Thakur was promoted to the Cabinet rank as a reward for exhorting his supporters to violence in Delhi during the anti-CAA protests. Now he is a high profile Minister of Information and Broadcasting.

Nupur Sharma is only suspended now. When the hue and cry related to the current controversy subsides, the suspension could be withdrawn and she could be even given a higher post either in the party or the government, if the BJP does not undergo a transformation with regard to its ideology and practice.

As the Indian Express wrote in its editorial on 6th June, “the condemnation of hate speech for the sake of international optics is like sticking a band-aid on a festering wound”. If the BJP wants to fulfil its promise of sab ka saath sab ka vikas aur vishwas and refurbish its image at the international level it has to take certain immediate steps.

First of all, the BJP has to accept the fact that India is highly polarized because of its wrong policy of spreading hate speech and hate messages against the minorities by its cadres. Only by denying or refuting adverse reports by international agencies about human rights violations, restricting freedom of speech and ex

The IT cell of the BJP is to be told to stop manufacturing and marketing hate messages and the loudmouths are to be told to control themselves. “Hate speech is unacceptable in itself from the mouths of ruling party members targeting a minority, as it mainstreams bigotry, causes dangerous divisions, and is against the national interest”.

Secondly, the BJP and the Sangh Parivar have to initiate steps to detoxify the venom of hatred that has been injected into the veins of Indian society. A large section of Indian society is already brainwashed with hate ideology and they believe blindly that the Hindu religion is in danger because of the minorities. Treatment for Islamophobia against the minorities is to be initiated on a war footing.

Thirdly, stop immediately raking up Mandir-Masjid controversies.  Let the government and the Sangh Parivar shall declare that they will strictly abide by the Places of Worship (Special Provision Act), 1991. Let a strong message go from the Prime Minister to the members of the Sangh Parivar as an endorsement of what Mohan Bhagwat said.

Fourthly, the government and the BJP have to build confidence in the minorities, especially Muslims, through proactive measures. As India has the second largest Muslim population in the world, it needs to show by word and deed that it is a government of all communities. The BJP governments and the Sangh Parivar have to put an end to the divisive and destructive policies like bulldozing houses, slapping sedition charges on academics and university students, evicting hawkers selling non-vegetarian food, creating controversies out of halal meat and namaz venues, etc.

Finally, the BJP governments at the Centre and in the states have to focus on governance issues like putting the economy on the growth path, job creation and providing quality education and health care to all sections of the society. In order to create an atmosphere of cooperation and good will among all sections of society the government has to facilitate giving bail to social activists and opposition political leaders who are arrested and put behind bar under the draconian laws like UAPA, NSA, Sedition law etc. The government also has to reach out to the opposition parties to evolve a consensus on solving the crucial problems facing the country.

All political leaders and political parties have to learn a lesson from the adage, “pride goes before a fall”. The time has come for the Prime Minister to speak out and tell the nation that hatred and revenge has no place in his government’s policies. Why do the hundreds of godmen and women of our country who lecture on spirituality keep silent when hate travels faster than the coronavirus? Let the religious leaders come out of their comfort zone and speak out that no religion teaches to hate another human being and hate is an abominable crime and sin.