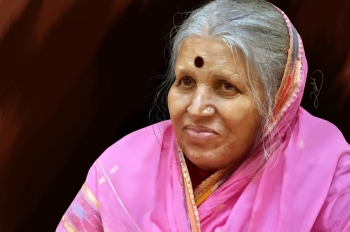 The disheartened mother called the one more daughter born to her on November 14, 1948 Chindhi, meaning in Marathi torn piece of cloth. Not wishing to educate her, she sent the daughter to graze the goats, as their cattle-grazing community living in Wardha district of Maharashtra did. But her husband Abhimanji Sathe sent Sindutai to the school. She used a Bharadi tree leaf as a slate.

The nine years old Sindutai in the fourth grade was married off to a man 20 years elder to her. She bore Shrihari Sapkal three sons and a daughter. Since the 20 year old Sindutai joined her village women protesting against the landlords and forest officials against their exploitation of the women for collecting the cow dung, her husband beat the nine months pregnant Sindutai mercilessly and the in-laws threw her out of the house. That night in a semi-conscious state she delivered her daughter in a cow-shed.

Sindutai walked many kilometers to reach her parent’s house. But they refused to accept her. Dismissing her plan to commit suicide, she begged in streets and railway platforms and at night slept at cemeteries fearing men. In the process she found many abandoned children. Accepting them all as their own, she began to care and feed them too with her little begged food. Accepting everyone who came to her became her mission. Not to discriminate between her daughter and the adopted ones, she donated her biological daughter Mamta to the Trust of Shrimant Dagdu Sheth Halwai, Pune.

Over the years Sindutai has nurtured about 1050 orphan children and they fondly call her Mai, meaning mother. She has now a grand family of 207 sons-in-law, 36 daughters-in-law and more than a thousand grand-children. She is still not sure of the next meal. Her 80 year old husband came to her apologetically and she accepted him as her oldest child.

Some of the adopted children, including her biological daughter, are now running their independent orphanages at Pune, Amravati, Wardha, Guha and Saswad. Some of these children have become lawyers and doctors too. One of her “children” is doing a PhD on the life of Sindutai.

She has been honoured with over 273 awards like The Nari Shakti Award, the highest civilian award for women from the Indian President in 2017, The Social Worker of the Year Award from Wockhardt Foundation (2016), The Mother Teresa Award (2013) etc. With that award money she purchased a land and built Sanmati Bal Niketan, a home for 300 such children at Hadapsar, Pune. The DY Patil Institute of Technology and Research honoured the illiterate Sindutai with a Doctorate in Literature in 2016. She is still full of energy and holds no negativity.

A Marathi biopic, Mee Sindhutai Sapkal, was produced in 2010 and was selected for world premiere at the 54th London Film Festival.

“There are 143 million orphans in the world waiting for someone to want them. Could one of them be waiting for you?”
― Liz Tolsma