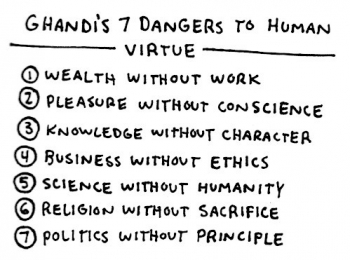 SINS OF THE MAHATMA 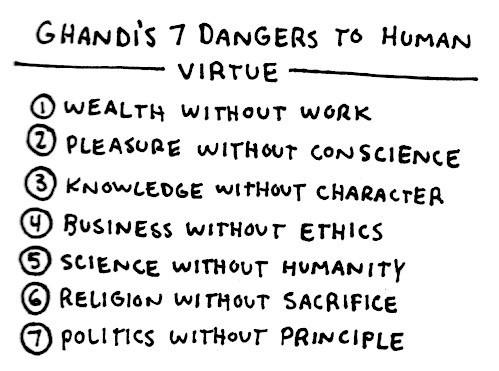 Outrageous! How dare one make such a statement on his 152nd birth anniversary? The “sins” that I am referring to are the Seven Social Sins that the Mahatma had identified and published in Young India magazine on 22/10/1925, almost a hundred years ago. How relevant are they today? Here they are:

A rudimentary reading would make it difficult to disagree. One would be inclined to endorse what was then said. Nevertheless digging a little deeper won’t hurt.

How were wealth and work perceived a hundred years ago? Despite the Industrial Revolution, in itself another hundred years old, wealth would still largely have been perceived as inherited, either by royalty or landlords. Such wealth would not have been by virtue of the present owner’s work, thereby attracting the Mahatma’s attention. Today, however, most wealth (moveable and immoveable assets) would, to a large extent, be self-generated. A recent report said that 156 street vendors in my city had been identified as crorepatis!

Secondly, the definition of work has also changed. Earlier it would be identified with manual labour, as in agriculture and mining (the primary sector); and to a lesser extent in skills like masonry or carpentry (the secondary sector). Today most people work in various services, including Information Technology Enabled Services (ITES) that fall in the tertiary sector of the economy. Post pandemic we have another work culture – work from home. In today’s context all these qualify as genuine work.

The second sin is pleasure without conscience. I daresay that today pleasure has assumed primary importance and the conscience is as good as dead. Here again it is possible that the Mahatma may have been hinting at sexual pleasure as evidenced in the Hindi translation “bhog”. We do know that the Mahatma had a prejudiced view of sex as seen in his opting for married bhramacharya (total continence even in marriage). This idea obviously had very few takers, like Jayprakash Narain. Now sex is quite literally out of the closet and is in your face everywhere. A god given gift, it is like a knife. I could use it for cutting vegetables or for stabbing somebody in the back. So it is good or bad depending on its usage.

In any case, the word pleasure can in no way be limited to sex. I may get pleasure from indulging in sport, playing with my grandchild or petting my dog. There is no conscience involved in such mundane acts. On the other hand, if I drink heavily and then beat up my wife and children; if I use sex as a weapon to exploit or rape another person, then indeed it is a case of deriving pleasure while hurting others and deadening my conscience. Even in little things like telling lies, pilfering or going late to work, our conscience does not seem to prick us.

The third sin is knowledge without character. I don’t think that these two can be yoked together. For example, character comes from conscience, religious and social upbringing. It is in no way linked to knowledge. Again, as with conscience, character seems to be at a premium today. As for knowledge, it may be expanded to include intelligence and wisdom. Knowledge is the mere accumulation of information, as in maths, physics or history. Intelligence is the ability to apply that knowledge for a useful purpose. Wisdom is the gift of knowing whether that application is good or bad for others. For example, I may have the knowledge and intelligence to prepare a nuclear weapon. Wisdom would caution me against the use of such knowledge or expertise. This is where character comes in to play.

The fourth sin is commerce without morality. This is closely linked to the generation of wealth and does not bear repetition. In turn, morality (the ability to distinguish between good and evil) is a derivative of both conscience and character.

The fifth is science without humanity. This too is very similar to the use of knowledge without character. Science can be either productive or destructive. We see this thread running through almost all human relationships and situations. Today it is widely believed that the Corona virus was developed in a lab, probably in Wuhan, China. The vaccines for the same are also a gift of science. One was destroying the human race, the other was saving it. The Mahatma is inviting all of us to use our wealth, knowledge and science for the common good, and not for selfish gain.

The sixth sin is on a different plane entirely – worship without sacrifice. I must again take recourse to the Hindi version to deeper understand what the Mahatma was driving at – “tyag viheen pooja”. In Hinduism pooja is a ritual, usually performed by a third person – a brahmin or an ascetic, to placate a deity or seek its blessings. Usually the language used is incomprehensible to the beneficiary. If the pooja is self-performed it usually involves various rituals and sacred objects like flowers or incense. It does not entail any sacrifice on the part of the one performing the ritual. With pooja kits and rituals available online it now costs the devotee little or nothing.

Perhaps this is what the Mahatma had in mind when he referred to worship without sacrifice. In this context the words of Mother Teresa are most appropriate, “When you give, don’t give from your excess, but give from what hurts”. That is why Jesus extolled the contribution of the widow’s mite in the Temple, even though in absolute terms it was a pittance as compared to the flashy tithing of the Pharisees. (cf Mk 12:41ff).

Unfortunately today almost all religious activity, cutting across the religious divide, has been reduced to mere ritualism or tokenism. Other than paying for the ritual, there is no personal sacrifice involved, so one would be inclined to fully agree with the Mahatma on this score.

In today’s politics driven world the seventh sin is the big fish – politics without principles. It differs from the other “sins” in that this one is more collective in contrast to the others that are more individualistic acts. The ramifications of politics are far reaching. Any policy decision (enactment of law or legislation) can have far reaching consequences, be it on cow protection or the so-called “Freedom of Religion” bills. Legislation can be economic, sociological, or at times directly targeting a community, be it ethnic, religious or a class of people.

Unfortunately, at least in India today, politics is driven not by principles of common good, but by the single minded pursuit of electoral gains. Almost every political decision or announcement is driven by that, principles be damned. What impact these “policy decisions” have on farmers, labour, petty traders, religious minorities or castes, is now largely determined by the electorate in mind. In like manner, so-called surgical strikes, be they in the defence sector or the economic ones, could be using a high degree of unprincipled subterfuge to have the desired impact.

Unprincipled politics gets further heightened when it plays out on the world stage; be it in the form of cold wars, invasions, or religious fundamentalism. It is indeed the greatest threat to world peace for which the Mahatma had forewarned us.

Interestingly, he scribbled these same words on a piece of paper and gave it to his grandson Arun, just a few days before his assassination. So it would have been very much on his mind. May it now be engraved on our hearts. JAI HIND.

•    The writer is the Vice President of the Gandhi Peace Foundation, Kanpur.