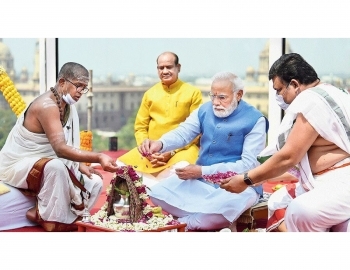 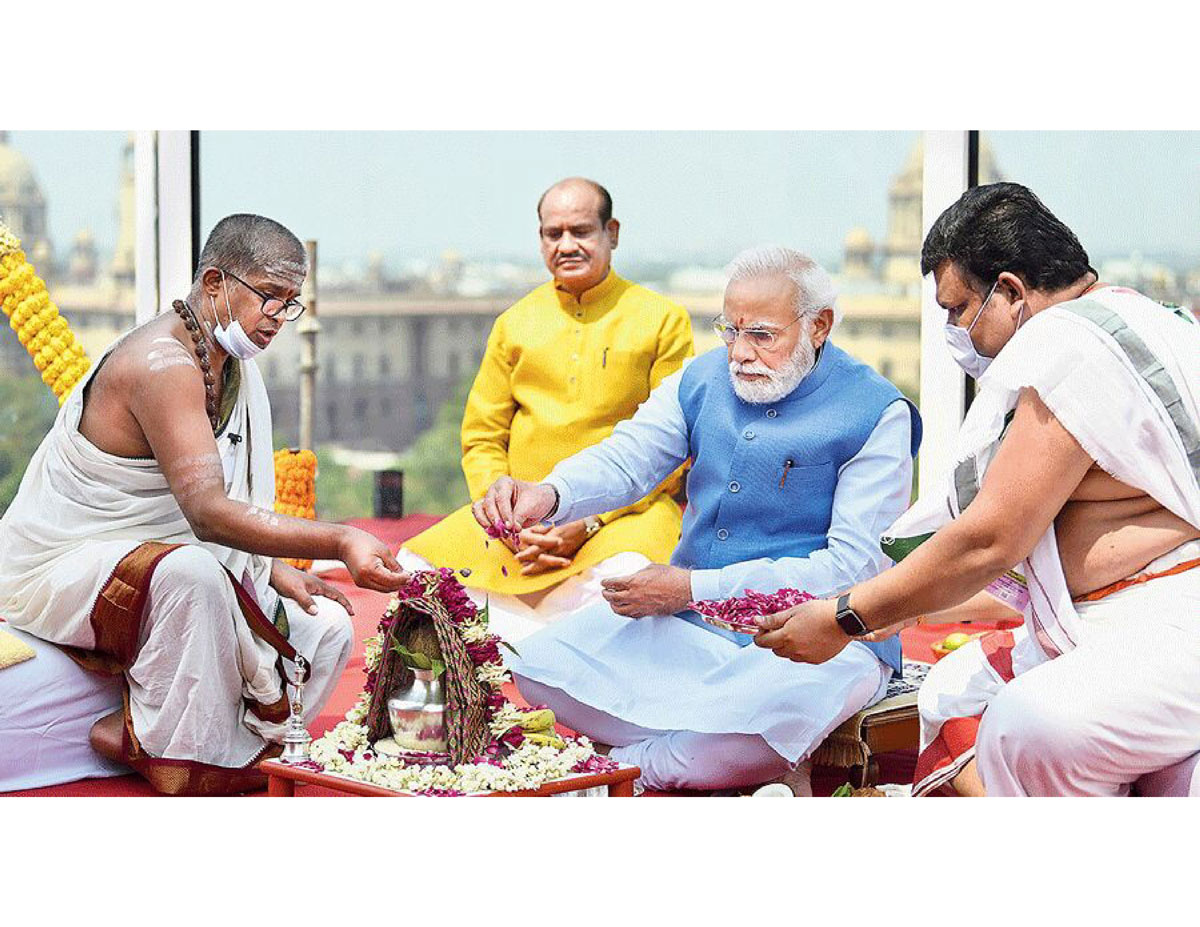 The preamble of the Indian Constitution ​states unambiguously that India is a sovereign socialist secular democratic republic. Article 25 of the Constitution states very clearly what the meaning of the term SECULAR is. It says: “The State shall not discriminate against any citizen on the ground of religion only and that the State shall have no religion of its own and all persons shall be equally entitled to the freedom of conscience and the right freely to profess, practise and propagate religion.” Ever since the BJP came to power in 2014 under the leadership of Narendra Modi, this aspect is blatantly violated by the political leaders and the officials. From the actions of the government and the ruling party it appears that India has become a Hindu Rashtra without any regard for the secular character of the Constitution and religious and cultural diversity of the people.

It has also become very common that Hindu prayers and rituals are performed at the ground-breaking ceremonies and inauguration of government projects and buildings. The latest example, as per the media reports, is performing rituals according to Hindu religious rites before the unveiling of India’s emblem atop the new Parliament building by the Prime Minister on July 11. Some of the opposition parties criticized the action of the Prime Minister. “National emblem installation should not be linked to religious ceremonies. It is everyone’s emblem, not those who have some religious beliefs. Keep religion separate from national functions,” said the CPI (M) in a tweet. CPI General Secretary D. Raja said the Parliament belongs to everyone and wondered “how a private personal event” was organized there.

It is fitting to recall another incident that happened in the southern state of Tamil Nadu on July 17. DMK MP Senthilkumar shared a video in which he is seen berating PWD officials for not inviting other religious leaders to perform rituals at the launch of a lake rejuvenation project. In the video, he questions why only a Hindu priest was called, saying that representatives of all religions should be invited to offer prayers for such an event. "Do you see such things happening in a Chief Minister’s function? This is the Dravidian model of governance. The government is for people belonging to all faiths," the MP told the official who organized the function. The BJP leaders have to learn from him how to become a true Indian.

Narendra Modi had declared sab ka saath sab ka vikas when he assumed the office of the Prime Minister in 2014. What has been happening since then is just the opposite. The government is openly identifying with the religion of the majority and dragging religion to the affairs of the state. Inauguration of a public building or unveiling the national emblem doesn’t require a religious ceremony. Even if a religious ceremony is held, all religions could be represented in that ceremony. When the Prime Minister goes to visit foreign countries, he proudly mentions about the religious and cultural diversity of India and the spirit of Vasudhaiva Kutumbakam. But the same spirit is not at all reflected in the actions of the BJP governments at the Centre and in the states.

The slow death of secularism is the result of the promotion of an exclusive and divisive ideology and the failure of the opposition parties, especially of the Congress, to educate people about the Constitution and the value of secularism or pluralism. Instead of opposing mixing religion with politics, often it also indulges in the promotion of soft Hindutva. The Congress is confused about its ideology and its vision for India. Unless and until it unequivocally affirms its faith in the core values of the Constitution, especially pluralism, it will not be able to win the confidence of people. Adopting soft Hindutva will further weaken the Congress and strengthen majoritarianism.

Mira Nanda in her book, “The God Market”, published in 2009, states that Hinduism has become the de facto religion of India.  “Use of explicitly Hindu rituals and symbols in the routine affairs of the state and electoral politics has become so commonplace that Hinduism has become the de facto religion of the ‘secular’ Indian state which is constitutionally bound to have no official religion”. United Progressive Alliance (UPA) under the leadership of the Congress was in power from 2004 to 2014. The Congress party did not pay attention to the growth of the divisive, exclusive and hate-filled majoritarian ideology and did not take any proactive steps to stop the spread of this dangerous ideology.

Another reason for the current situation of religious division and acrimony appears to be the failure of the judiciary to protect the Constitution, especially secularism, its core value. The judgement of the Supreme Court on the Babri Masjid-Ram Mandir dispute is questioned by many legal experts. Nomination of the former Chief Justice of India, Ranjan Gogoi, as a member of Rajya Sabha by the government is viewed by many as a reward for delivering a verdict favourable to the government and the ruling party. The inordinate delay in hearing the case challenging the constitutional validity of Citizenship Amendment Act (CAA) is cited as a sign of the failure of Judiciary to protect secularism and equality before law. Judiciary has to play a crucial role to protect the Constitution and the fundamental rights of citizens when the executive becomes authoritarian and majoritarian with a brute majority in Parliament.

Religions, especially Hinduism, being influenced by fundamentalism, could be another reason for the intrusion of religion into the affairs of the state. It appears that fundamentalists with political motives have increased their influence in almost all religions in India. Religious leaders either because of their silence or connivance are in a way allowing fundamentalists to take over religions and promote superstitions that suit their agenda. Instead of promoting the core values of religion like forgiveness, compassion, sensitivity, justice, respect for all human beings and the earth, ​they ​emphasized religiosity based on rituals and irrational practices. Religious leaders often collude with politicians to further their vested interests, instead of correcting the latter when they misuse religion and encourage superstitions to polarize people.

The media also has played a role in promoting the right wing ideology. Media in a democracy is expected to critique the policies of the government and of political parties and the actions of religious leaders. It appears that most of the media has become the propaganda machinery of the ruling party and the right wing groups. Instead of exposing the agenda of promoting blind faith and superstitions under the guise of religion by political leaders, the media often justifies superstitious religious practices encouraged by the political leaders.

The educational system and educational institutions have failed to inculcate in the students the core values of the Indian Constitution, especially secularism/pluralism. The focus of educational institutions has been academic performance of the students. The educators, including the Catholic educators, have been busy with increasing the competence of students to the near exclusion of character-building and instilling democratic and humanistic values in the students. On the other hand, the rightist forces do not leave any stone unturned to promote their divisive and exclusive ideology. As a result, the bulk of the middle class has been brainwashed with Hindutva ideology. That could be the reason for 64% of Hindus hold the view that in order to be an Indian one has to be a Hindu, according Pew Research Centre Report.

History is a witness to the disasters caused by mixing religion with politics. Pakistan and Afghanistan, the neighbouring countries of India, are examples of failed states because of religion dictating the politics of those countries. It is very unfortunate that the BJP and its leaders do not learn from the experience of the theocratic states. They are apparently determined to transform India into a theocratic state. At the same time, the opposition parties remain in their comfort zones and do not come together to save the secular democracy of India.

The situation can be changed only when people give up their addiction to religiosity and become spiritual. Religiosity is guided by rituals, practices, dogmas and laws whereas spirituality consists of practicing the core ethical and human values taught by religions.