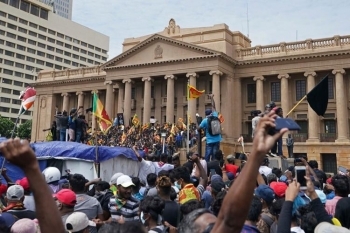 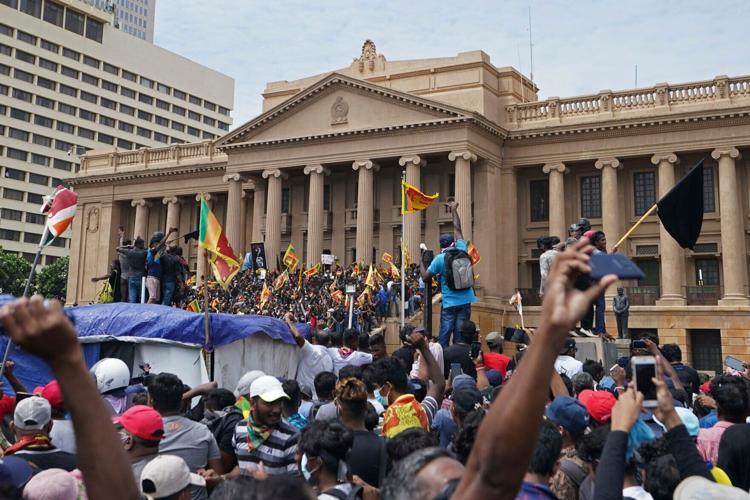 Much has been written and debated about the political and economic crisis in Sri Lanka.

Mr Gotabaya Rajapaksa, who came out victorious in the 2019 Presidential elections with over 52 percent of the nearly 16 million possible votes, had in his 88-page election manifesto “Vistas of Prosperity and Splendour”, envisioned to hope and a sense of pride, etc.  But, then what happened?

What ostensibly irked the 22 million Sri Lankans that while they had to face untold hardships, the Rajapaksa family hardly bothered for them. Notably, the Government had at one point of time over 40 Rajapaksas in ministerial positions at the national level.

Disillusioned at having to stand in serpentine queues for fuel, essential staples including medicines and increasing blackouts, the “GotaGoGama” movement demanding the President’s resignation took shape. Curfews imposed served their purpose but after pro-government supporters attacked peaceful unarmed demonstrators, in which at least nine people were killed and over 200 injured, it led to a nationwide furore and Prime Minister Mahinda Rajapaksa resigned. As an immediate measure, the President appointed Mr Ranil Wickremesinghe in his place.

On 22 June, Mr Wickremesinghe’s frank but startling revelation before the Sri Lankan Parliament depicted the nation’s predicament. That the government has no way of purchasing petroleum fuels (gasoline and diesel) because oil companies and governments do not trust that Sri Lanka will be able to pay. “We are now facing a far more serious situation beyond the mere shortages of fuel, gas, electricity and food. Our economy has completely collapsed. That is the most serious issue before us today.”

Did Mr Gotabaya mess up with Sri Lanka’s finances?  Well, no easy answers. The writing on the wall seems to suggest that soon after taking over as President, the series of neoliberal economic policies he put in place, including cutting taxes on corporations, proved counterproductive and it decreased government revenue. It is also said that lavish spending under his dynasty’s rule coupled with misconstrued policies like banning chemical fertilizers forced the country to go in for food imports. The precarious economic situation got further exacerbated by the impact of the Covid-19 pandemic which especially took a heavy toll on Sri Lanka’s once thriving tourism industry which used to generate over one-tenth of the country’s economic output.

This April the government announced that it was suspending the nearly USD 7 billion foreign debt repayment due for this year out of about USD 25 billion due through 2026, it gave birth to street protests. This May reportedly the inflation rose to 39.1 per cent. Despite raising taxes, the total foreign debt, pegged at USD 51 billion, is a cause for worry. The situation is said to be grim as Government has no foreign exchange to buy energy, food is scarce, medical supplies are low, schools and colleges are closed and power cuts in vogue has adversely impacted commercial productivity. With millions of Sri Lankans struggling for their living, four out of five people are said to be skipping meals. Notably, the UN Resident Coordinator in Sri Lanka, has in recent interviews maintained that the current food security situation was so bad that low-income households who have been the hardest hit are adopting negative coping strategies.  If local newspapers are to be believed, rationing of electricity effective this March 31 in Sri Lanka is attributed to corruption and inept power system management. The fuel crisis which has claimed over a dozen lives while people were waiting in queues for days together is another story.

Well, nobody expected that a group of citizens in Sri Lanka who initiated a peaceful protest nearly 4 months ago would be supported by many others and finally oust a powerful “Executive” President like Mr Gotabaya. But perseverance paid rich dividends and no sooner the protesters overran the President’s palace, the inevitable happened. The dramatic events that followed between July 9 and 13 ultimately forced the so called “strongman” President who is credited to have eliminated the Liberation Tigers of Tamil Eelam (which was trying to establish an independent Tamil state in Sri Lanka) to flee the island nation along with his wife in a military aircraft in the early hours of July 13 to Singapore via Maldives. His final destination remains unknown as of now.

India, which has been lending a helping hand in terms of soft loans, supply of petroleum products, medicines, food products etc., has said that it stands with the Sri Lankan people in their aspirations for prosperity and progress through democratic means, established and constitutional framework.  Until now, the Rajapaksas had been a dominant force in Sri Lankan politics due a weak a fragmented opposition. Although Mr Ranil Wickremesinghe has taken over as the interim President and a new Government is expected soon, the country faces several challenges ahead to bring back normalcy, economically.

Political stability and good governance ought to go hand-in-hand – be it to address the forex crisis, depreciation of the currency, high cost of living etc., among others, taking a leaf out of Singapore’s success story merits consideration.

If countries differ in their economic success, it is because of their effective governance of different institutions, like, the rules influencing how the economy works including the incentives that motivate people and so on. From a poor third world nation how did Singapore become one of the world’s most prosperous countries? Singapore, founded as a British trading colony in 1800, experienced a plethora of problems soon after its independence in 1965. When compared to Sri Lanka, a small country with a total land area of approximately 709 sq km, Singapore had to face mass unemployment - as much of its 3 million people had no jobs - and more than two-thirds of its population was living in slums/squatter settlements on the city's fringe.

However, unlike Sri Lanka’s Rajapaksas, who wielded power for nearly two decades are said to be squarely responsible for its current predicament, Singapore was lucky to get a political leader and statesman like Lee Kuan Yew, commonly referred to by his initials LKY, whose life of public service is both unique and remarkable. During his 56 years of public service, he was a keen listener. Notably, when he spoke, several US Presidents and British Prime Ministers of his era keenly listened to him.

LKY, referred as modern Singapore’s founding father, is credited for changing the course of the country’s history by taking the right decisions, choosing the right values and most importantly, the right economic policies to ensure the overall development of a successful society. After taking over as Singapore’s first prime minister in 1959, he continued for successive terms till 1990. Later, for the next 24 years, till his death in 2015 at the age of 92 years, LKY actively served in various capacities in the Government as senior Minister, Minister Mentor and senior Advisor. That the per capita GDP of Singapore increased by 55 per cent (from USD 400 in 1959 to over USD 22,000 in 1999) despite immense political and economic changes globally is remarkable.

In the book “Grand Master’s Insights on China, the United States, and the World - Interviews and Selections”, LKY’s response to on a query - Does effective governance require “guardians”? – is thought provoking. He said,“For Singapore, the basic challenge remains unchanged: unless we have a steady stream of high-quality people to serve as PM [prime minister] and ministers, Singapore as a little red dot will become a little black spot…To find able and committed people of integrity, willing to spend the prime of their lives, and going through the risky process of elections, we cannot underpay our ministers and argue that their sole reward should be their contribution to the public good. We did not bring Singapore from the Third to the First World by head-hunting ministers willing to sacrifice their children’s future when undertaking a public service duty. We took a pragmatic course that does not require people of calibre to give up too much for the public good. We must not reduce Singapore to another ordinary country in the Third World by dodging the issue of competitive ministerial remuneration.” He goes on, “To get good government, you must have good people in charge of government…even with a poor system of government, but with good strong people in charge, people get passable government with decent progress. On the other hand, many ideal systems of government fail…Britain and France between them wrote over 80 constitutions for their different colonies. Nothing wrong with the constitution, with the institutions and the checks and the balances. But the societies did not have the leaders who could work those institutions, nor the people who respected those institutions…The leaders who inherited these constitutions were not equal to the job, and their countries failed, and their system collapsed in riots, in coups, and in revolution… It is essential to rear a generation at the very top of society that has all the qualities needed to lead and give the people the inspiration and the drive to make it succeed. There is no better way to run the country than the best person for the most difficult job.