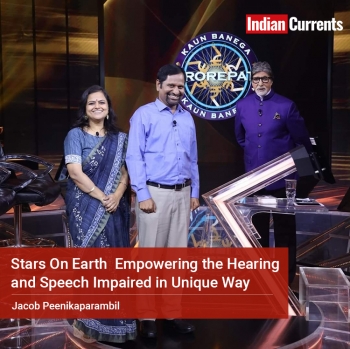 STARS ON EARTH : Empowering the Hearing and Speech Impaired in Unique Way

The dedicated couple Mr. Gyanendra Purohit and Mrs. Monica Purohit have instilled hope in the hearing and the speech impaired persons so that they would be able to live with human dignity and make their contribution to the society. Many people in India and even abroad came to know about this unique couple and their mission carried through Anand Service Society, when they appeared in the Karamveer special of the game show, Kaun Banega Crorepati, hosted by Amitabh Bachchan on 20th October 2020. As the couple and their organization have been undergoing a crisis due to Covid 19, the T V programme came as a boom to connect their organization and their mission with many people, besides getting Rs. 25 lakhs for winning the game.

Evolution of the Vision and Mission

Mrs. Monica, a woman with the same vision and mission became Gyanendra’s life partner as well as partner in his mission of empowering the hearing and speech impaired. Monica was also a post graduate in social work and after the marriage she also specialized in sign language to enhance her capacity for building the capacity of the hearing and speech impaired. She has done B.Ed. in Deaf Education and M. Ed. in Teachers and Special Education. She was honoured one of the 100 women achievers of India in 2016 by the Ministry of Women and Child Development in collaboration with Facebook.

Mr. Gyanendra later acquired a diploma in Community Based Rehabilitation (CBR). Through CBR he is reaching out to hundreds of hearing and speech impaired persons. He is also a Master trainer for making barrier free infrastructure for the Government of Madhya Pradesh. Various activities for transforming the lives of the hearing and speech impaired are carried out through Anand Service Society Indore, established in the year 1997 for empowering the ‘differently abled’.

It is said, “Necessity is the mother of invention”. When he found that in order to fight for the rights of the hearing and speech impaired persons legal expertise is needed he decided to study law and he secured LLB degree along with his multifarious work. Today he practices as a lawyer, especially for fighting the cases of his target group. Advocacy for the disabled has become his characteristic as a lawyer. The expertise in law and his practice in the court have further empowered him to fight against corruption, rampant in the various government departments.

The couple have received a dozen awards for their unique contribution to the disability sector. A few of their contributions and achievements are as follows.

•    Composed National Anthem in sign language and got it approved by the government of India in 2003. As a result 78 lakh Deaf population of India got the right to sing National Anthem in their own sign language.
•    The couple initiated the opening of India’s first Deaf friendly police station at Tukoganj Police Station Indore where deaf people can lodge complaint in sign language.
•    They fought a legal battle for reservation for the deaf and the dumb in government jobs and won the case. This year 39000 post of teachers is likely to be advertised and 2 % of it i.e. 780 posts will be going to deaf category.
•    They fought and won the right of the deaf and dumb to be admitted in the government ITIs. In the year 2016, M P Govt announced admission of 419 seats for deaf.
•    They did advocacy for the admission of hearing and speech impaired children in the normal schools. Now around 15000 deaf children are enrolled in normal regular schools of MP.
•    This couple rescued and helped many deaf girls who were molested and raped in various institutions by registering their cases with the police.
•    They rescued deaf girls from committing suicide through counselling in sign language personally and through video calls.
•    Because of their intervention 90 deaf disabled children got reunited with their families. They played a crucial role in bringing back Gita, a hearing and speech impaired Indian girl, from Pakistan. Presently the girl is with the couple. They are trying their best to find out the parents of Gita.
•    Trained the teachers in Govt. schools on the method of communicating to the differently abled in view of making inclusive education more effective.
•    Made Bank of India, Vijay Nagar, Indore deaf  friendly.
•    Translated various movies into sign language: Sholay, Munna Bhai MBBS, Gandhi and Taare Zamin Par so that the hearing and speech impaired persons can easily enjoy these films.
•    They helped Sudeep Shukla, a hearing and speech impaired person, to contest the state assembly election from Satna of Madhya Pradesh in 2018. The couple helped him to deliver his speech in sign language. He is the first MLA candidate who is hearing and speech impaired.
•    During the nationwide lockdown due to Covid 19 Anand Service Society rescued more than 600 hearing and speech impaired persons through video call helpline in sign language.
•    450 hearing and speech impaired children are taken care through 4 hostels: two in Indore and one each in Dhar and Alirajpur. All these hostels are run in the buildings provided by the government and with the grant in aid from the government. The unit at Dhar is the first online disabled children’s hostel in India.
•    As part of Community Based Rehabilitation they have trained about 100 volunteers who help the disabled persons in accessing various services. They also conduct survey of the disabled children in their respective areas and get them admitted in schools.

Transparency, integrity, a firm determination not to compromise with the values of honesty and  effective public relations have helped the couple to overcome many hurdles in channelizing the government resources for the cause of the Disabled.

Non-Governmental Organizations can learn from each others’ experience. The NGO involved in empowering people with disability can learn a few lessons from Gyanendra and Monica.
•    Often NGOs, especially faith based NGOs, including the organizations within the Catholic Church, start institutions or projects first and search for persons to manage them. As a result the persons who manage and work in such institutions generally do not have any vision and as a consequence they lack passion and creativity. In the case of Anand Service Society, the starting point was a vision and determination. Naturally the couple could initiate some creative ventures which nobody else has done.
•    Lack of professionalism is observed in many NGOs. Professionalism consists of knowledge about the disability sector and legal provisions, skills, adopting the right procedures and focusing on the outcome and impact. Gyanendra and Monica have adopted professionalism from the very beginning of their work.
•    Very often many NGOs are satisfied with institutional care of the disabled persons. But the priority of Gyanendra and Monica is empowering the hearing and speech impaired to access their rights. They could integrate care with advocacy for the rights of the disabled.
•    Gyanendra and Monica could successfully venture into new initiatives because of their continuity in the same mission, in the same organization and in the same place.
•    Many institutions and projects serving persons with disability, especially the institutions within the Catholic Church do very good work and they have dedicated and hard working staff also. But often they fail to build public relations. Gyanendra and Monica could mobilize resources from the government without making any compromise with honesty and integrity because of the excellent public relations they have built up with the officers, political leaders, and other organizations. Their participation in the Karamveer special of the game show, Kaun Banega Crorepati hosted by Amitabh Bachchan, became a reality because of their capacity for building public relations.

Gyanendra Purohit says, “My brother, Anand, who was hearing impaired and died in an accident continues to inspire me to take up new initiatives and face challenges for the sake of the hearing and speech impaired persons. Working with government departments puts a lot of pressure on me to compromise with ethical and moral values; but the training I received from Universal Solidarity Movement (USM) gives me the strength to withstand all temptations.” Gyanendra Purohit and Monica stand out as role models for social workers as a right combination of compassionate care, focus on accessing rights, professionalism, honesty and commitment to empowering the differently abled people.
(jacobpt48@gmail.com)