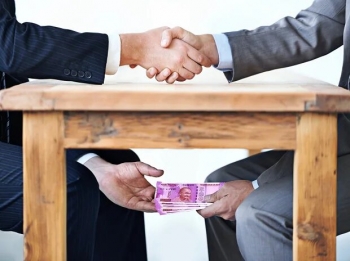 “Corruption-free India for a developed Nation.” The theme for this year’s Vigilance Awareness Week, observed across the country (October 31 to November 6) needs no further simplification.

The Central Vigilance Commission (CVC), India’s anti-corruption watchdog, introduced the above practice to coincide with the birthday of Sardar Vallabhbhai Patel (October 31) since the year 2000.

Gifted with a unique personality, Patel’s integrity as a politician and a leader possessing a very strong will that made him handle all matters with an iron grip made him to be known as the Iron Man of Bharat. He is said to have held the broom against nepotism, corruption, graft and greed whenever he came across and spared no efforts to weed them out ruthlessly. Mahatma Gandhi once wrote in his journal, “Sardar is incorruptible”.  In the words of Rajaji (C Rajagopalachari), “Vallabhbhai was born not a day too soon for India. But, alas, he died too soon. India wishes he had not found his rest in the mother's lap so hurriedly, when he was so much wanted for some time longer.”

The Vigilance Awareness Week aims to make the employees of Government of India, as also those employed in companies, societies and other local authorities owned or controlled by it, aware of the dangers and harm caused by corruption. Workshops and walkathons are organised towards awareness generation. An annual pledge is taken to follow probity and rule of law in all walks of life; to neither take nor offer bribe; to perform all tasks in an honest and transparent manner; to act in public interest; to lead by example exhibiting integrity in personal behaviour and to report any incident of corruption to the appropriate agency. However, it is laudable that the message of integrity is being extended to all spheres of life including schools and higher educational institutions.

The Prime Minister, too, in his address on the occasion of Vigilance Awareness Week, among others, reportedly advocated that “for a developed India, we have to develop such an administrative ecosystem with zero tolerance on corruption”. He urged the need to devise a way of ranking departments on the basis of pending corruption cases and publish the related reports on a monthly or quarterly basis and added that, “no corrupt person should get political-social support. When you take action with conviction, the whole nation stands with you.”

But what is worrying is that the menace of corruption is rather deadly and India is no exception. More so because, the adverse impact of lack of probity in public life leading to a high degree of corruption is manifold.

Some 64 years back, the Law Commission observed in its fourteenth report that “there is a vast field of administrative action in which the administrative authority may act outside the strict scope of law and propriety without the injured citizen being in a position to obtain effective redress. Administrative power and discretion are vested at different levels of the executive, all the members of which are not endowed with the same level of understanding and strength of character. Where there is power and discretion, there is always the possibility of abuse, more so when the power and discretion have to be exercised in the context of scarcity and controls and pressure to spend public money. The absence of a machinery for appeals other than inside the hierarchy and of a machinery for redress of grievances contributed to the growth of an impression of arbitrariness on the part of the executive. Consequently, there has been a phenomenal increase in the number of peddlers of influence…"

The Santhanam Committee on Prevention of Corruption set up by then Home Minister Lal Bahadur Shastri in 1962 to suggest ways and means to take remedial action against corruption had noted that, “the anxiety to avoid delay has encouraged the growth of dishonest practices like the system of speed money…a fairly common type of corrupt practice particularly in matters relating to grant of licences, permits, etc. Generally, the bribe giver does not wish, in these cases, to get anything done unlawfully, but wants to speed up the process of the movement of files and communications relating to decisions. Certain sections of the staff concerned are reported to have got into the habit of not doing anything in the matter till they are suitably persuaded.”

The CVC, born in 1964 on the recommendations of Santhanam Committee attained statutory status on September 11, 2003 with the enactment of the CVC Act, 2003. The CVC, consisting of a Central Vigilance Commissioner as Chairperson and not more than two Vigilance Commissioners as Members, is empowered to enquire or cause inquiries to be conducted into offences alleged to have been committed under the Prevention of Corruption Act, 1988 by certain categories of public servants like Group "A" officers of the Central Government, such level of officers of the corporations established by or under any Central Act, Government companies, societies and other local authorities, owned or controlled by the Central Government, as specified by the Government.

CVC faces a lot of challenges and although its opinion is only advisory, valuable inputs provided therein have helped government departments in decision-making. And over the years, thanks to the efforts of CVC, a sizeable number of public servants are being brought to book and their numbers seem to be growing. That, on an average, every year around 1200-plus of them have been awarded major penalties as well as minor penalties may be tip of the iceberg. But for those slapped with major penalties that include reduction to a lower stage, reduction to a lower time scale, grade, post or service, compulsory retirement, removal and dismissal from service, the writing on wall is clear. Minor penalties like censure, withholding of promotion for a specific period, recovery from pay whole or part of any pecuniary loss caused to the organisation by his/her negligence etc., reduction to lower stage in time scale and withholding of pension/ increments does adversely impact the wrongdoers.

To cut the story short, can CVC hasten up alleged cases of corruption?  According to information laid in Parliament in 2015, a committee set up by CVC to study the existing pattern of prolonged disciplinary proceedings and suggestion for remedial action found that on an average, it takes about 8 years for finalizing a major vigilance case from the date of occurrence of irregularity. So, the need for organisations to prevent corruption in the first place is important.

CVC alone cannot curb corruption. Organisations have to do their bit. Beyond having impressive mission statements, the actual delivery in organisations may be somewhat hampered due to a plethora of reasons including lack of effective governance. Nonetheless, at a macro level there is an imperative need for organisations and those who hold public office uphold trustworthiness in letter and spirit besides display high standards of ethical behaviour, openness and accountability.

At an individual level what kind of person can resist corruption?  Studies have shown that individuals are less likely to act in a corrupt way if they are more committed to their moral values. Such values, perceived as "not-for-sale", includes values one holds dear, like integrity, honesty and humility which is seldom compromised even in the face of financial incentives.

For a corruption-free nation, the grievance redressal machinery in organisations needs to be effective as it can provide vital inputs to prevent corruption in the first place.