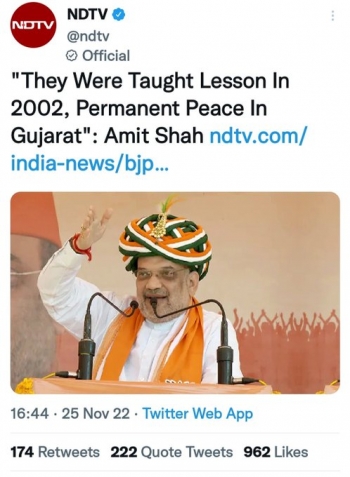 Union Home Minister Amit Shah openly acknowledged the role of the BJP in 2002 communal riots in Gujarat that resulted in the killing of more than 2000 Muslims and more than one lakh Muslims becoming homeless. Amit Shah considers it as a great achievement of the BJP and he has appealed to people of Gujarat to vote for the BJP for this achievement.

Addressing a rally in Mahudha town of Kheda district in support of BJP candidates ahead of the next month's Assembly elections, Amit Shah alleged, "During the Congress rule in Gujarat (before 1995), communal riots were rampant.  In 2002, they tried to indulge in communal violence... we taught them such a lesson, we put them in jail. It's been 22 years; we have not put a curfew even once. BJP has done the work to bring peace to a land that saw frequent communal riots," he said.

Many books and researched articles on 2002 Gujarat riots have exposed the brutality and the complicity of the Modi government in Gujarat. Prominent among them are Gujarat: The Making of a Tragedy by Siddharth Varadarajan, Between Memory and Forgetting: Massacre and the Modi Years in Gujarat by Harsh Mander, Gujarat Files: Anatomy of a Cover-up by Rana Ayub and Under Cover: My Journey into the Darkness of Hindutva by Ashish Khetan.

Vipal Mudgal in his review of the book Under Cover in The Times of India on 17th September 2021 summarized the content of the book in the following words. “He shows, through a series of sting operations, that it takes decades of work to infuse hostility and create an ecosystem of fear, discord, and meek mediocrity. Once the groundwork is done, absurdity can strike anyone in the face, anytime. It is possible, for instance, that routine people savagely react one day to something distant and oddly unconnected. The judge, the prosecutor, and the defence lawyer can sometimes gang up to punish the victim or sabotage the trial. It is equally likely that the cops staging a daylight murder are rewarded handsomely and an honest investigator gets reprimanded or removed”.

For many years the BJP was in a denial mode of its role and Modi government’s role in the 2002 Gujarat riots. They presented it as a natural reaction of Hindus to the Godhra carnage. When Narendra Modi, as the chief minister of Gujarat, was confronted in an interview by Kran Tapper in 2007 on questions related to Gujarat riots, he left the interview after three minutes. But now, the BJP has no hesitation to admit its role and Amit Shah has the audacity to present it as a great achievement of the BJP. That is why the Gujarat government prematurely released 11 persons who were convicted in the Bilkis Bano gangrape case. The central government gave its nod to the Gujarat government within two weeks.  The Godhra BJP MLA C K Raulji, who made the comment that the convicts who were released are Brahmins and they have good ‘sanskar’, is given a BJP ticket from Godhra in the assembly elections. All these signs indicate that the BJP is proud of what it did in 2002.

One can notice a sea of change in the socio-political scenario of India ever since the BJP came to power at the Centre in 2014 under the leadership of Narendra Modi. Hindutva ideology based on hatred and prejudice has infiltrated into the different layers of society. The RSS-BJP combine makes profuse use of social media to spread hate messages and polarize the Hindus. The result is a phenomenal change in the mindset of the Hindus, the majority community. According to a Pew Research Centre survey held between the end of 2019 and beginning of 2020, nearly two-thirds of Hindus (64%) say it is very important to be a Hindu to be truly Indian, and nearly 59% say it is very important to speak Hindi to be truly Indian. 72 percent of Hindus say that a person cannot be a Hindu, if he/she eats beef.

Hate and prejudice against the Muslims have become very common. NDTV News reported on 28th November an incident that took place at Manipal Institute of Technology, Udupi. A professor had reportedly asked a student his name, and on hearing a Muslim name, he blurted: "Oh, you are like Kasab!". Ajmal Kasab, the lone Pakistani terrorist captured alive after the 26/11 Mumbai attacks, was executed in 2012. The professor was comparing the student to a terrorist.  In a widely-shared video, the student was heard confronting the professor and accusing him of denigrating his religion by comparing him with a terrorist. Fortunately, the college has suspended the professor and an enquiry has been ordered. If a highly educated person like a college professor can become the victim of prejudice, what would be the situation of the ordinary Hindus who are bombarded with hate messages day in and day out?

Even crimes are given communal colour. For example, a communal angle is inserted by some people into the Shradha Walker Murder case because in this case the culprit is a Muslim, Aftab Amin Poonawalla. Indeed, it is a gruesome and utterly despicable crime. A crime is a crime whether it is committed by a Hindu, Muslim or Christian and what is important is the act of crime and not the religion of the person who committed the crime. But the Hindutva groups try to polarize people by making use of a crime.

BJP’s Kapil Mishra tweeted, “Bollywood, media, ads that promote false constructs like brotherhood, politics that is soaked in the blood of daughters, rich and upper middle classes drinking the poison of fake secularism, the sold police and the jihadi education model. Don’t blame daughters for murders like Shraddha.”

NDTV News on 28th November reported that a police van carrying Aaftab Amin Poonawalla was attacked by a group of sword-wielding men in the evening. According to the report, the police managed to control the situation and Poonawalla is safe. The right-wing group Hindu Sena has taken responsibility for the attack. A statement from Vishnu Gupta, the National President of the organisation, said the whole country is "watching how Aftab cut a Hindu girl into pieces".

The same type of crimes- killing a person and cutting the body into several pieces and storing it in the fridge for several days before disposing of it at different places- were reported in the media during the last three weeks. A murder took place in Uttar Pradesh, where a man was arrested for allegedly killing and chopping his ex-girlfriend into six parts before disposing them in a well. On 28th November the media reported a horrible killing. A 45-year-old man was allegedly killed by his wife and son in May this year. They cut his body into pieces and stored them inside their fridge for about two days and disposed of them in an open ground less than a kilometre away from their house in East Delhi’s Trilokpuri. Such horrible crimes were committed in the past also, but people perceived them as crimes that are to be condemned and the criminals who are to be given the severest punishment. Unfortunately, the right-wing Hindutva groups have started using crimes in which a Muslim man and a Hindu girl are involved to create hatred in Hindus against Muslims.

Bharat Jodo Yatra led by Rahul Gandhi with its catchy slogan Nafrat Chodo Bharat Jodo (Give up hatred, unite India) appears to be a fitting response to the divisive, exclusive and hateful ideology of the ruling party and its protagonists. According to Rahul Gandhi, the goals of Bharat Jodo Yatra are 1) to unite India by liberating it from hatred, anger, fear, arrogance and violence, 2) to listen to the voice of people and thereby reduce the distance between people and political parties, and 3) to remind people about the culture of India: compassion, love and mutual respect.

“Some people have asked about the need for 'Bharat Jodo'. India has many critical goals to achieve... We have to reduce the suffering of millions of poor people. It's not easy. It can't be possible if India is divided, angry, full of hatred for itself. Every single person in this country is Indian and if anybody hates any other Indian, he is hating the idea of India itself. Today, we have an atmosphere of anger and hatred generated by a particular ideology," said Rahul Gandhi.

As long as politics of fear, hatred, exclusion, self-aggrandizement and arrogance dominate, the dream of India becoming a “Vishwa Guru” will remain only a day dream. Only by reviving and rejuvenating the original culture of India- compassion, love and mutual respect- India can attain its place among the comity of nations.