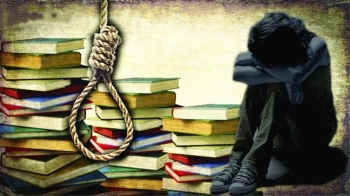 Every now and then, we hear that some students died by suicide for some or other reason. This year, on February 24, a Delhi Public School, Faridabad, student died by suicide because of bullying in the school.  In his suicide note he blamed the school for his death. Bullying could be a cause, but there could have been other reasons too. Naturally, in a school, a student is not alone, he has his friends; they would definitely interfere. Or, at least, they would inform the principal or some teachers.

If a student dies by suicide, I feel the cause should be sought in his family, not anywhere else. Of course, I won’t completely rule out the possibility of principals and teachers becoming a cause of a student’s death by suicide. What I want to say is that the family should primarily be responsible for the mental health of the young. This doesn’t mean that the school has no role to play. If you want an emotionally healthy and hardworking student, both the family and the school should work in tandem; they should always have the good of the child in their minds.

The role of the family

Parents have a profound and significant role to play in shaping the personality of their children. It is one’s personality that determines whether one’s life is going to be happy and successful or unhappy and a cause of worry and anxiety for many. There is no exaggeration in saying that a child’s personality is shaped for the most part by his parents. They practically determine it through their intimate relationship with him. The kind of personality that he will develop depends on the type of relationship he has with his parents.

The term “environment” is a highly complicated term. It includes a host of factors like the family, culture, neighborhood, school, etc. In psychology, they are known as the factors of personality development. Out of these, the most important factor is the family. It is here the child lays the foundation for the process of socialization and learns the basic cultural values of the society in which he is born.

In the family the two most important figures that influence the child’s personality are his father and mother. At first, the mother is everything for him and he is entirely dependent on her.  During this period, he has practically no attraction for his father. But as he grows, he learns to talk, to walk and to differentiate the objects around him as different entities. He begins to explore the world around him and takes interest in it. As a result, his relationship to his mother loses some of its vital significance and his relationship to his father takes on a new meaning.

Till the age of five or six, the child’s attachment to his mother is very strong. He wants her to love him unconditionally; he is to be loved and accepted for what he is. Then there occurs a shift in his mother-centered attachment and consequently he is drawn more and more towards his father. His father’s personality begins to play a vital role in him. He becomes a great admirer of his father who appears to him as a man of great power, strength, courage and authority. Under his care and protection, he feels quite safe and secure. At this stage he badly feels the need of his father’s love and care. This is also the stage at which the child needs the gentle discipline and authority of his father. Here it is important to note that a father’s authority is neither threatening nor authoritarian, but it is a loving authority that is kind and patient.

A child’s mother-centered and father-centered attachments are the co-principles of an integrated personality. What gives rise to a well-balanced personality is the harmonious synthesis of these two principles. For mental health and maturity this synthesis is a must. And this integration or synthesis takes place spontaneously and naturally. But for this to take place, the child should really feel that he is loved and wanted by both his parents. When the fatherly and motherly principles are well synthesized in a child, in him we have a well-balanced personality.

Family quarrels and disputes often draw the child either to the side of the father or to that of the mother depriving him of the counterpoise he needs to develop a balanced personality. In family quarrels, the child becomes an object of contention between the father and the mother, each wanting to have him on his or her side. At one time he is drawn to the side of his father, at another to that of his mother. It often happens that when he is loved and accepted by his father, he hated and rejected by his mother, and when he is accepted and loved by his mother, he is treated with aversion and detestation by his father. The effect of all these on the child is that he becomes inwardly torn apart and confused.

Frequent family quarrels and violent disputes often do untold harm to the child. Children instinctively want their parents to love each other and live in peace and harmony. Anything that goes against this instinctive desire of theirs causes irreparable harm to their personality. For developing a well-balanced personality, the child requires the love and acceptance of both their parents, the love and acceptance of either one alone will not meet his needs. He requires both the motherly and the fatherly principles and their integration to develop a mature personality.

The Role of the School

In the process of his growth, a child is bound to have experiences of insecurity, inferiority, inadequacy and fear due to his small size, physical weakness, his little knowledge, etc. If the child is not to become abnormal in his behavior, these unhealthy experiences of his must be counteracted and neutralized. And what counteract and neutralize these inevitable experiences of the child and positively help him towards building a well-balanced personality are the unconditional love and acceptance of his parents. Child who is unconditionally loved and accepted by his parents feels secure and protected. Besides giving the child a sense of security and protection, the unconditional love and acceptance of his parents also create in him a feeling that he is a person loveable and acceptable. This in turn builds up in him a sense of self-esteem and self-importance and enhances his relationship with others. His feeling of being secure, protected, loveable, acceptable, self- important, etc. counteracts his experiences of insecurity, inferiority, inadequacy and fear and helps him to mould a mature personality by developing in him positive feelings towards himself and the people around him.

Every year, after the various School Boards have announced exam results, we hear that some students have died by suicide. This often happens in families where the parents’ love and acceptance of the student is conditional. To this you could add the parents’ unreasonable expectations and the consequent pressure on the child for extraordinary performance and the school’s craze for outstanding results. The schools should not be concentrating on exam results. On the other hand, they should be concentrating on developing the potentialities of the child to the maximum possible point. The child should be the school’s most important concern and not the exam results.

It is a universal axiom that if you have been hurt and the hurt has not been healed, you will go on hurting yourself and others until your hurt feeling has been healed. If you had been badly treated and beaten as a child, when you grow up, you will beat and treat others badly. If you had seen your father beating your mother and felt badly hurt, you also will beat your wife when you are married unless you have been healed.

As a child Adolf Hitler was badly treated by his father. It is said that he would beat his son Adolf so mercilessly that he even fainted and urinated. Besides, the boy almost every day witnessed the horrible fight between his father and mother. He was an emotional wreck as a child. No wonder, Adolf Hitler mercilessly ordered the killing of millions of people later on. On April 30, 1945, he died by suicide. If you are hurt and the hurt feeling is not healed, you will continue to hurt yourself and others.

Parents and teachers should understand that a child is not a thinker; basically, he is an imitator; he will do what he sees his elders do. Children cannot see themselves directly; from the way they are treated by responsible people they will conclude that they are either good or bad. Your treatment of the child will give him the message that he is either good or bad, and if he perceives himself to be good, he will behave well and on the other hand, if he perceives himself bad, he will behave accordingly. Always keep in mind that children value themselves to the extent they have been valued by their parents, teachers and others. If a child has no peace and joy at home and also in the school, you can be sure that the child is on the road to self-destruction and destruction of others.