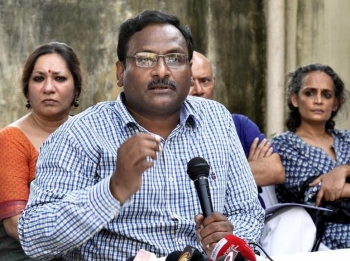 By suspending the Bombay High Court order to acquit Delhi University professor G.N. Saibaba and four others convicted in a case under the Unlawful Activities (Prevention) Act (UAPA) of 1967, the Supreme Court has caused grave injustice.

The manner in which the Supreme Court dealt with the Maharashtra government’s appeal against the Bombay High Court order has shocked the legal fraternity.

The order of the Nagpur bench of the Bombay High Court comprising Justices Rohit Deo and Anil Pansare came on October 14, Friday. The same evening Solicitor General Tushar Mehta, in the absence the Chief Justice U.U. Lalit, approached the senior most judge Y.B. Chandrachud praying for a stay on the order directing the immediate release of the five convicts. When Justices Chandrachud and Hima Kohli refused to stay the order, and said the matter could be taken up on Monday for issuing notice to all concerned, Mehta on Saturday evening approached the CJI, Justice U.U. Lalit, who referred the application to a bench comprising Justices M.R. Shah and Bela M Trivedi. After a nearly two-hour long hearing in a special sitting the same evening, the bench suspended the Bombay High Court order.

Never before has the Supreme Court convened a special sitting to consider an application for stay on a High Court order, that too to keep five people confined in jail. The Supreme Court convenes special sittings only when matters of grave consequences are involved, like the country’s security, breakdown of governance or matters of life and liberty of citizens. One fails to understand the urgency in the present case especially when the main accused in the case, 55-year-old professor G.N. Saibaba, is wheelchair-bound and suffers from various ailments due to which 90 percent of his body is disabled.

Justice Shah’s remark during the proceedings that the High Court did not go into the merit of the case, but found a shortcut is something very disturbing even to the dumbest law student, considering the fact that the 101-page High Court judgement is very comprehensive , well-argued and will go a long way in reforming the shoddy criminal investigation and trial system that has resulted in arrest and prosecution of hundreds of civil rights activists in the country on trumped up charges ever since independence.

When Basant drew the attention of the court to the medical condition of Saibaba and pointed out that he is alleged to be the brain and only ideologically involved, Justice Shah refusing to grant any relief to Saibaba responded that as far as Maoist activities are concerned the brain plays a significant role.

Acquitting Saibaba and the others in alleged Maoist linked cases, the Nagpur bench of the Bombay High Court had held the entire trial against the accused to be null and void in the absence of valid sanction under section 45 of the UAPA. The sanction to prosecute Saibaba was accorded by the Maharashtra government after the trial began against him instead of being submitted it before, rendering the entire process invalid, the High Court order had observed.

As for the remaining accused, the Directorate of Prosecutions’ report seeking grant of sanction was sans reasons, a breach of mandatory provisions of sub-section (2) of section 45 of UAPA, the court held. It rejected the prosecution’s argument of egregious defect in or absence of sanction is a curable defect.

“We are inclined to hold that every safeguard, however miniscule, legislatively provided to the accused must be zealously protected… Departure from the due process of law fosters an ecosystem in which terrorism burgeons and provides fodder to vested interests whose singular agenda is to propagate false narratives,” the order said.

While the war against terror must be waged by the State with unwavering resolve, and every legitimate weapon in the armoury must be deployed in the fight against terror, a civil democratic society cannot afford to sacrifice the procedural safeguards provided, and which is an integral facet of the due process of law, at the altar of perceived peril to national security, the judges observed.

The siren song that the end justifies the means, the procedural safeguards are subservient to the overwhelming need to ensure that the accused is prosecuted and punished, must be muzzled by the voice of rule of law, the order said.

The HC judgement has cleared a very important aspect that under UAPA a court cannot take cognizance of an offence until sanction is received from the Union or State government. The sanction is to be given within a prescribed time only after considering the report by an independent authority which is expected to review the evidence and give its recommendation.

Sanction serves the salutary object of providing safeguard to the accused from unwarranted prosecution and agony and trauma of trial, and in the context of the stringent provisions of the UAPA, is an integral facet of the due process of law.

Saibaba was arrested on February 16, 2014, the court had taken cognizance of the case, framed charges against him in February 2015 and examined the first witness before the sanction for prosecution was submitted in April 2015. Consequently the High court said: “We hold, on the authority of the Constitution Bench decision of the Hon’ble Supreme Court in Baij Nath Prasad Tripathi, that if cognizance is taken without complying with the requirement of valid sanction the entire trial shall stand vitiated.”

At the end of the day, professor Saibaba and four others who should have been released from the jail on October 15 are still in jail due to the Supreme Court’s highly questionable intervention. How much longer the acquitted will remain in jail only time will tell.

In a letter to his students from the prison cell Saibaba wrote to his students in 2018: “I dream of being in my classroom. Day and night fettered behind the strong iron beams of my tiny solitary prison cell. I see you, talk to you and hug you by the force of my frail and challenged life in my unchained mind’s eye as the desire for freedom flows through the sinews and veins of my bloodstream even as I am caged far away from you.” (Quoted from “Why Do You Fear My Way So Much: Poems and Letters from Prison” by G.N. Saibaba). One can only hope Saibaba’s dream comes true very soon.