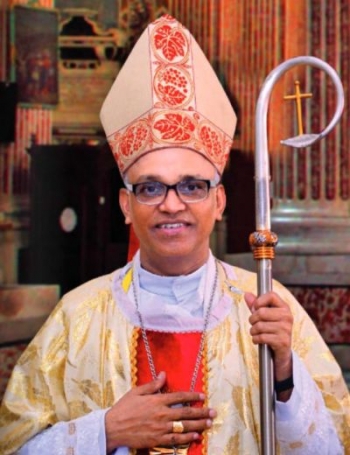 THE ARCHBISHOP RAPHY I KNOW

Normally, when a new bishop or archbishop is appointed, we are presented with a “dry run” of when the person was born, his family history, educational background, posts held, etc.  Since I am not “normal” I shall stray from the straight and narrow to share my personal experiences of Bp Raphy Manjaly who was installed as the Archbishop of Agra on 7th January.

I first met Raphy when he was about 20 years old, studying in St Joseph’s Regional Seminary, Allahabad to become a priest for Agra diocese.  At that time he was experiencing a vocational crisis for two reasons – one external and the other internal.  The external one was that his then Archbishop Dominic Athaide believed that unless a seminarian could play the piano he could not be a good priest!  Whacko isn’t it?  The second reason was the writings of theologians like Bultman who in their attempt to demythologise Jesus, were actually destroying the faith of innocent seminarians like Raphy.

Abp Athaide sent Raphy for guidance to Fr Augustine Deenabandu OFM Cap of Jyotiniketan Ashram, Bareilly; which is where we met.  Outgoing Abp Albert D’souza made a specific reference to this in his Nunc Dimittus speech of how all of us met together.  The point here is that Raphy did not gloss over his doubts.  Like the sinking Peter, he had a crisis of faith, and again like Peter, he called out to the Lord to save him.  I see this as a positive development in his faith journey.  Our faith needs to be challenged, so that we may emerge stronger.

Shortly after, the two of us set off on a Gospel journey in a neighbouring district, to visit some Punjabi Catholic farm workers who had settled in the remote Terai region.  We were accompanied by the catechist Garibdas, with his harmonium, on the one cycle that held all our meagre belongings.  One night when we were sleeping in a hut Garibdas boldly said that as an obedient “servant” he would do anything that he was told to!

I shamelessly told him to go bathe in the stream alongside, on that cold winter night.  He did so.  I felt ashamed of myself, and promptly followed him into the freezing water.  The family whose hut we were sharing were so poor that they did not have any extra bedding.  So like two drowned rats, we had to ward off the bitter cold by covering ourselves with paddy straw.

I feel that this was another important lesson in the life of the young Raphy.  Don’t ask others to do what you yourself are not prepared to do.  I am sure that the gospel journey, in extreme poverty, would also have impacted his faith for the future.

Many years later when he was on the faculty of the seminary in Allahabad I went to visit him.  While having breakfast, I asked him who the new rector was.  Bashfully lowering his eyes, he told me that he himself was the rector.  This was typical of the man.  He did not take pride in office.  It was these striking qualities of humility and simplicity that endeared him to many.  He still has the boyish grin on his face that he had when we first met about 40 years ago.

Two very recent incidences also reflect his nature and character.  During the lockdown last year the Ministry of Health had laid down strict rules for re-opening churches, including giving a signed declaration of compliance to the local police, so much so that religious leaders, not just Christians, were hesitant to re-open places of worship.  I approached Bp Raphy, then my bishop of Allahabad.  Through the good offices of Dr Roshan Jacob IAS, we got an appointment with the Chief Secretary of U.P. Bp Raphy asked me to prepare the memorandum.  No other bishop from U.P. accompanied us to get the much needed clarification from the Government.

Shortly after he was appointed to the Pontifical Council for Interfaith Dialogue; and in that context told me about a complaint that he had received from a young Muslim in the Gulf, about the bishops in Kerala coming out against “love Jihad”.  Here again Bp Raphy shared the correspondence with me, and encouraged me to write to that aggrieved person.  I am sharing these most recent instances as an indication of what kind of person Abp Raphy is – one who trusts others and delegates responsibility.  He had no ego problems in joining a lay initiative like mine.

During the installation ceremony a recorded interview was screened.  When asked about his future plans he said that had no pre-conceived ideas, and was not in favour of a top to bottom approach.  He believed in spiritual discernment with one ear tuned to promptings of the Holy Spirit, and the other ear to the ground.

After being bishop of Varanasi and then Allahabad he was now returning to his parent diocese of Agra.  He called it a homecoming and quoted the Lord telling the prophet Jeremiah that he would guide and protect him on his return to the homeland.  Abp Raphy also quoted Salesian counsellor Rev Joe Mannath who had said to him that whatever he was, it was due to the faith of his parents.

Raphy was one of seven siblings born to M.V. Chacko and Catherine of Trichur diocese in Kerala.  At the tender age of 15 he came to Agra, and later did his doctorate from the Agelicum University, Rome.

Because of Covid restrictions the installation was held in the hall of
St Peter’s College with mandatory masks and proper social distancing.  The Eucharistic service was devoid of ostentation, with about 20 archbishops and bishops attending, together with the acting Nuncio, Rev Robert Murphy and priests from his former dioceses of Varanasi and Allahabad.  I was deeply touched when Bp Francis Kallist of Meerut referred to my recent article “Do we need Bishops” in his homily. The service was in Hindi ably compeered by two local vocations – Revs Moon Lazarus and Amit George, healthy signs for an emergent local church

After the installation, lunch was served to all in common.  I was happy to see that, because so often in church functions, the lowly laity is packed off to another section for their food.

This installation and smooth transition of office took place on the same day that Donald Trump and his supporters were brazenly attacking the seat of governance in Washington, with a grim reluctance to accept defeat.  It was therefore even more pleasant to see the cordiality evident between the outgoing Abp Albert D’souza and the incoming one.  I say this because even though Abp Albert proffered his resignation at the mandatory age of 75, he was fit and fine enough to have gone on for another ten years.  When the world is engulfed in power struggles it is a joy and solace to see a humble and smooth transition.

Abp Raphy has a dual role to play. His metropolitan region encompasses the States of U.P., Rajasthan, Uttarakhand and even a segment of M.P. Three of these States have belligerent BJP Govts that have recently enacted severe anti-conversion laws. Secondly, as a member of the Pontifical Council for Inter-Religious Dialogue, he has another onerous task cut out for him. He needs all our prayers and support, and I personally hope and pray that as the Lord’s chosen one, he will rise to the occasion, as he has the requisite qualities of spirit, mind and heart. Having known him for over 40 years I make bold to say so.